I currently call the city of San Francisco, California home — although I spent most of my high school years in the Palo Alto/Stanford University area. Being from the more commonly known “Silicon Valley,” coding was and still is a common knowledge that is often seen as a measure of basic intelligence. Children in both public and private schools begin to learn computer skills as early as second grade. By fifth grade, most are fluent in Java. I like to call it the “official unofficial” language of the Bay Area.

Then there’s me: a well motivated and intelligent student, yet one who never did get past the novice functions of static motion in any programming language they taught us in school. I don’t usually equate elementary school with failing grades, but I was the one student to fail my computer lab class in fifth grade. After that, I told myself I would never touch a programming interface again. That is, until now — I decided to challenge my past by taking Art from Code as my first year seminar, and ever since then, I have never looked back.

I’ll admit, I was a little apprehensive of my ability to succeed in the class because of my turbulent history with the topic, yet I find myself quite the opposite now. At the time of writing this, we’re about 7 weeks into the semester, and I feel pretty confident with my progress. The featured image above, Spacetime, is an ode to the beautifully complicated (and often unjustly simplified) idea of time. Gen Z-ers like to spit out the phrase “time is a construct,” in order to sound edgy or seem smarter than they actually are. Yet, they usually have little to no knowledge of the history of this statement and its true meaning. This dichotomy of a simplified fantasy versus its complex reality is depicted via my use of thin lines and a black and white palette, while the refined nature of the Times New Roman font acknowledges the longevity of the history of time and space.

My use of text intentional as well. Bergson was a French philosopher who is most famous for his theory of duration: the mechanics of conscious time as it is divided into one moment and the next. The definition and depiction of time has taken many different lenses over the course of history — from tangible to theoretical, and beyond. Time is not only a concept in relation to space within its scientific field of spacetime, yet it is also an art, a phenomenon, a mystery, and the foundation of almost every logistical system we know to exist.

The text displayed to the above represents the many different planes or perspectives that time can take. Whether it be Bergson’s attempt to quantify time via measuring moments, or the more mindful concept of time as medium of change, they all come down to the same  principle: no matter what time is to you, it touches everything. No one can escape nor control the reigns of time. This is illustrated with the ticking second hand as it crosses over all definitions of time listed via text. The minute and hour blocks are a literal representation of spacetime: the more time, the more space.

My work is inspired by Amit Patel, a creative computer engineer based in the Bay Area. Patel’s work did not necessarily inspire mine, but rather his story and alma mater: Stanford University. Stanford is home to one of the world’s biggest library’s of philosophy, the Stanford Encyclopedia of Philosophy. They are kind enough to publish their records on the internet, thus it is accessible to the general public (like myself!). This website is where I originally fostered my fascination with Bergson’s theory of time and others who have dedicated their life to the vast study of time.

Computational art and other alternative genres of art are often criticized for being too new-aged and undeserving to the prestigious definition of art. I find this ridiculous. To confine the definition of art is a black and white crime against the spectra of humanity. The purpose of art is to be free and expressive in, thus to limit what art can or cannot be is counterproductive. You cannot limit something that theoretically has no limits in its practice.

Code is as just of a medium of art as any other medium is too. It is a language that requires practice and precision. Errors are not tolerated in the final product (unless it’s purposeful of course). It is something that is built from a combination of creative intuition and expertise of the medium. Sure, it runs by the press of the button, but is founded on much more than a single action and can even proceed to be interactive as well. It is an artful dance between machine and man, as to the horse and rider in the ring. 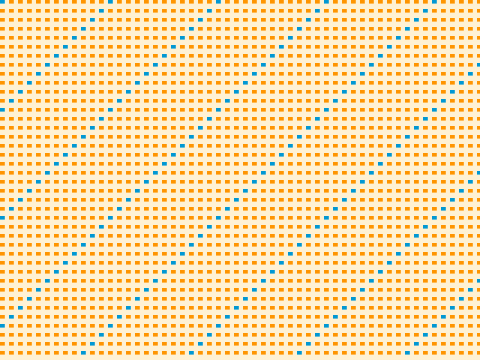 Art from Code: Molnar and Repetition