For this project I decided to look at a man by the name of Brock Pierce. He’s a former child actor, now known for his entrepreneurship, philanthropy, and being an early advocate for cryptocurrencies, but specifically Bitcoin. If you look on Brock Pierce’s wikipedia page you’ll see his ties to

Marc Collins-Rector and Chad Schacklet, who he worked with in establishing the Digital Entertainment Network. (DEN) Its goal was to put out weekly episodes of shows exclusively online. The company was given a $75 million IPO but it was withdrawn due to allegations of sexual assault and pedophilia against the founder, Marc Collins-Rector. In 2000, Collins-Rector, his partner Schacklet and Pierce fled to Spain. They were arrested two years later. In the documentary “An Open Secret” many of Collins-Rector’s victims speak out against him, detailing the abuse by Collins-Rector. In Early 2011, Pierce visited the Virgin Islands to attend Mindshift, a conference of top scientists, hosted by Jeffrey Epstein. This was 18 months after Epstein had completed a brief stint in jail in Florida and registered as a sex offender. Pierce was elected the Director of the Bitcoin Foundation in May 2014. As of 2021, Pierce has an estimated net worth between $700 million and $1.1 billion.

During the construction of the project, it became abundantly clear that Brock Pierce had no problem conducting business with convicted sex offenders and pedophiles. Although he has continued to deny any wrongdoing in regards to the charges relating to Collins-Rector, his ties to Epstein and Epstein’s interest in cryptocurrencies back in 2011 certainly raise eyebrows. Before the blockchain became legitimized, cryptocurrencies, like Bitcoin, were often used for illegal purchases on the black market-weapons, drugs, human trafficking. The virtual currency was untraceable. Epstein was a wealthy man who flew underage women to “Epstein’s Island,” so seeing this connection between a self titled “Crypto guru” and Epstein made me think of how many abhorrent transactions were possibly conducted through Bitcoin.

For this project, I used a sheet of white paper to map out all the people and things that were connected to Brock Pierce. I started with trying to imagine how it would look like to subtly call someone out on their shady business dealings without all the evidence in my corner to support me. This was potentially something defamatory and dangerous but something, as I previously stated, became abundantly clear.

I started by folding the piece of paper to create four quadrants. From there I drew four blue boxes. The one on the bottom left represented Brock Pierce, with the accompanying BP logo which are his initials. There’s a smaller box within the box that is shaded red on the outside. This acted as a thermometer, so to speak, the more red the outside of the box was, the worse the person or idea.

The top left box has a skull and cross bones with three smaller boxes. I landed on this because of the common connotation attached to a skull and cross bones. It’s easy to identify and understand. The small box on the left is Marc Collin-Rector. The part of the small box on the outside of the larger one is fully shaded red because of the deep rooted connection. The box on the right is Jeffrey Epstein. Now while their connection is not as deep-rooted as Pierce and Collins-Rector, it is still a questionable one. His isn’t shaded all the way.

The box on the right has the three boxes that are typically filled with fruits and the 7’s seen on slot machines. This is to indicate that these boxes have something to do with money. The two boxes are DEN and Bitcoin. They aren’t shaded in all the way because other than the individuals that Pierce involved himself with, the very things themselves aren’t harmful things.

The last box on the bottom right has two small yellow rectangles fully shaded in with an accompanying flare. These two boxes are the ideas of human trafficking and pedophilia. No matter how much Brock Pierce attempts to rehabilitate his image in the public eye, no matter how much money he makes in cryptocurrencies, his close association with Marc Collins-Rector and his meetings with Epstein will follow him forever.

There are black lines connecting each person and thing directly back to Brock Pierce. In some way, shape or form, he is connected to all of these people, companies, or things like Bitcoin, human trafficking and Hollywood pedophilia. 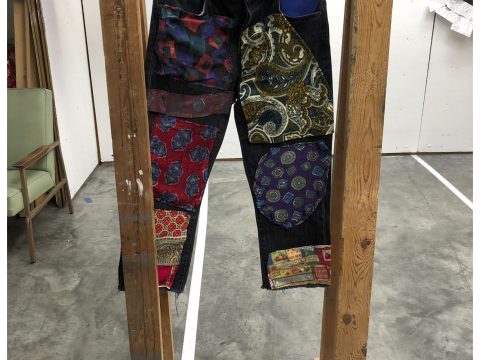 Paranoia as a System: Mindless Patchwork