Scanner art is unique because of the ability to unfold objects into two dimensions with incredible detail. The fractal-like detail a scanner creates is a unique trait that allows any scanned image to be zoomed in on, creating multiple new scenes. The unconventional method of planning your image’s composition is fascinating, as you have to imagine your objects as they would appear to the scanner, rather than to yourself. I sometimes struggled to imagine how three dimensional objects would be unfolded onto the screen, and had to forfeit total control over the final results. This is obviously the integral machine component to scanner art, the separation of chance between the artist and final product.

The image above was made via pigmented water folded within saran wrap. The scanner was set with specific color settings which led to precise color difference and the exaggeration of light frequencies. The different levels of color are not differences in the pigment color, but simply the distance the pigment was from the scanner, essentially creating a topographical map of the plastic. Finding narratives from unplanned visual effects is one of the most captivating aspects of machine art to me. I am drawn to the lack of control that the artist has, and how that lack of control actually enhances the final product. I was unsure which colors the scanner would create, so my narrative is dependent on the act from the machine. Narratively: this image is a map of a fictional world the size of a wallet, an island of mountains and river valleys.

The image above was created by scanning a tray of dice surrounded by LED lights and their visual distortions. I am drawn to dice in regards to machine art, specifically the parallels between the random values determined by dice and the random values generated by computation. These dice are suspended within water and pigment, and the fluid randomly fills the divots, adding coloration to the values. If 3 of 6 divots are pigmented, did I roll a 3 or a 6? Does my total roll add to 110 or only a 29? Interestingly, the liquid the dice were originally suspended in was red, but after being color rebalanced, the red becomes purple, and the previously white canvas becomes bright crimson. The brightness of the LED lights disturbs the scanner, creating a horizontal distortion which crosses into the frame of dice. The distortion’s barcode-like visual deformity acts as scratch marks upon the face of the lid, piercing into the tray. After the effect of machines: the LED distortion and the recolonization, it appears the pigment from the tray has leaked out of its puncture wound and obscured the scanner.

This final image is the most basic form of scanner art, a high res scan of the dust and dirt on the scanner glass. This filth isn’t normally as visual, contrast enhancements were needed to reveal the hidden forms, much like how telescopic photographs of deep space need incredible enhancements to reveal distant suns. Interestingly, much of this dirt is organized into vertical lines. These clues reveals the scanner’s form, much like how brushstrokes reveal a painting to be made via a bundle of bristles. 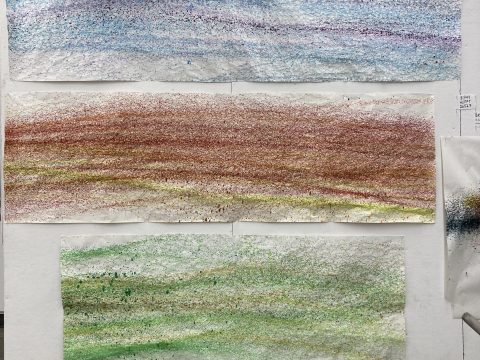