I created a drawing machine from the frame of an old ten speed bicycle. After disassembling the bike,  I placed the frame horizontally onto sawhorses so the gears and rear wheel could spin freely, and I attached a cardboard disc to the rear wheel. I would hand-crank the pedals to spin the wheel to high speeds, and throw paint onto the spinning wheel. Centrifugal force would fling paint off the wheel and scatter it to a long horizontal canvas I had hung around the bike.

This final product was far from what I had originally planned when I first acquired the old bike. I originally envisioned a spirograph-type machine where audience members could pedal the bike to generate drawings. However, once I started disassembling the bike, I ran into may difficulties regarding where I could place parts, as once I removed a part, there were few other places I could reattach it to aside from its stock placement. One of my first experiments had the bike horizontal on the sawhorses, but I attached paper to the cardboard disk, and would drop paint slowly on the paper to make a piece directly on the canvas. During these experiments, paint would sometimes fly off the wheel from centrifugal force, and I accidentally covered the walls in many paint droplets. Before continuing, I taped up the walls to prevent a mess. After I had created 4 or 5 of the disk arts, the paper on the wall had a layered striped of many paint colors that was much more interesting then the disc-shaped work I was trying to create. Because I was restricted by the constraints of how much I could adapt the bicycle, I realized I needed to manipulate one of the few things I could alter: the canvas.

After the revelation I completely surrounded the bike wheel in paper, and would mix different shades of acrylics and watercolors together. I would dump this paint on the wheel which I now spun at maximum speed, and it was forcefully flung onto the canvas in a line parallel to the height of the bike. I would dump about a few tablespoons of paint at a time, and would adjust the height of the canvas in-between paint dumps in order to create a criss-crossing network of lines. I experimented with varying degrees of paint consistency, paint color, wheel speed, paper distance, bike height, and the way I released the paint onto the paper. Over time, I begun to learn how to use the bike to create the splatter effects I wanted, and sometimes would lift the frame off the sawhorses while the wheel was in motion. Lifting up the bike was like using a massive chaotic spray paint cant, I would have to point the rear of the heavy frame in order to fill in specific regions of the canvas.

I created 4 large pieces, which took me about 2-4 hours each to create including setup and cleanup/breakdown (this project made a mess!). From the beginning, one of my main goals was to have my final products show the force of the bike by expressing its motion on the canvas. In these pieces, you can see the way the paint was whipped onto the surface at great speed, and you can track lines of specific mixtures across the ~6 foot long canvas. Though when I found the bike it was in a terrible unridable condition, likely abandoned for 5+ years, it still contained massive amounts of potential energy within its old bones. I named this project 81749HUFFY26827, the serial number of the frame I repurposed. I chose this name to emphasize the produced work as a raw, utilitarian product of the bicycle’s motion: the visualizations of the sheer force produced by its strong frame. 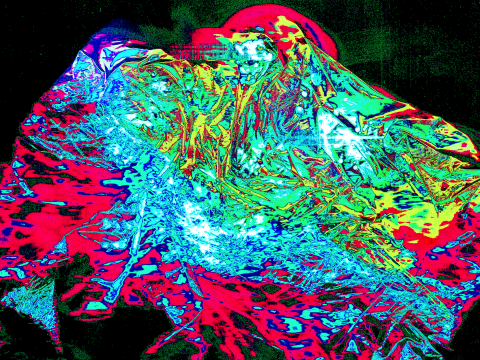