In this set I’ll be looking at five pieces that I’ve worked on so far in our Drawing Machines class: Chili Scan, Kirby Databend, Snake-scanned, Sanitizer-scanned, and Simon-scanned

This piece is a video scan I made showing a degraded clip of a chili pepper eating competition layered with a morphing dark shape that splits and moves across the screen freely.

This piece was one of the last experimental scan videos I made in class.

The other scan videos I made were mostly clip-based so for this one I wanted to see if I could make one that was a little more cohesive and continuous. I also wanted to play more with having the video fade in and out of recognizable shapes and figures, and I wanted to try and exacerbate the video degradation more than I had in my other videos.

For this video, I combined two video scans I made, one of a chili pepper eating competition, and one of a raindrop on a car windshield. For the chili contest video, I scanned it from my laptop with my phone and tried using zoom and movement to get more video degradation. I wound up chopping it up to focus on the parts of the video I found the most visually interesting and editing the saturation and contrast to bring out the pixelation in the clip. I got the raindrop video from a compilation of dashcam clips. I recorded the video in slow motion with my phone camera close up to the screen to isolate the raindrop I wanted to use and I enhanced it with contrast so that it looks more like an unrecognizable morphing blob.

Originally I had the clips separate but I ended up layering them on top of each other so they blend together more.

I liked the project because it was my first time trying re-scanning and this was the video that I made and felt like I was starting to understand the process and the possibilities of this method. Compared to the other re-scanned clips I was experimenting with I feel like I actually enjoy watching this one because the longer I look at it the more the pixels and lines blend together in a way I find visually satisfying.

This piece is a scan I took with a snake pendant in the center framed by warped chain and dark morphed shadows.

Describe your motivation in creating this piece

I made this piece towards the end of our first day working with scanners right after we had been introduced to using document settings in our scans. While making this piece I was experimenting with gamma and contrast settings to see how I could get the colors in the scan to warp.

While making this piece I kept my snake charm in the middle as a baseline centerpiece for focus and so that I could see how the scan colors were changing as I edited the document settings. I used my wallet chain and moved it across the scanner as it ran to get the wavy/liquid effect around the snake.

This was my favorite piece to come out of our first round of using the scanners because I felt like I was starting to understand how to get specific effects using the scanner while still having a lot of variabilities as I wasn’t sure how the final scan would come out. I felt excited when it came out and I found it really visually appealing with the way the gamma exacerbated the shadows from my hands holding the chain and the colors it brought out from the scan.

This piece is a scan of an amoeba-shaped blob of hand sanitizer with confetti-like bits in it, the image has some scanning glitches in it so there are blocks of crossing lines across the frame.

Describe your motivation in creating this piece

When I made this piece I had a bit of experience using the scanner but I really wanted to see how far I could take glitches and color settings. I was slightly hindered by my software because I couldn’t access the full range of color manipulation as the Widows software but I was really excited when this one came out because I think the reflections from the objects I was scanning got the camera to capture the degradation in the shot.

My process for this piece was to cover the scanner screen in saran wrap and then lay down some sanitizer that I spread out and shaped with my finger. I also added some colored mirror tiles and rhinestones into the sanitizer. I ran the scanner using the document settings and I edited the gamma and contrast to make it a little bit crisper and to bring out the light reflections that came out in the scan.

This piece is probably my favorite of the ones I made with the scanner because its layout was so simple but I felt like the scanner captured the light through the sanitizer and the rhinestones really well. My favorite part about using the sanitizer is the jelly-like aspect it has and the way the light runs through it, so I was really excited when the scan came through because I felt like it visually captured the texture that I was feeling and seeing while I worked with it.

This piece is a scan I did of my friend Simon where I moved the scanner around to capture his whole head.

Describe your motivation in creating this object

I did this scan as part of a set of scanner portraits of Simon. I originally wanted to see if I could get each side of his face as the scanner ran but the scanner ended up running slower than expected so we kept moving it around his head.

For this piece I had Simon stand and slowly turn his head back and forth as I held the scanner around his head. I also did some slight color adjustments in post to accentuate the detail in his hair.

I really loved the way this scan came out because of the way it captured the textures of Simon’s hair. I really enjoyed the way the light shone through the back of his face and how the blur of his face contrasted with the high detail in his hair. I found the colors and shadows in his hair really visually satisfying and I liked how the portrait focussed on the part of his head that wasn’t his face. 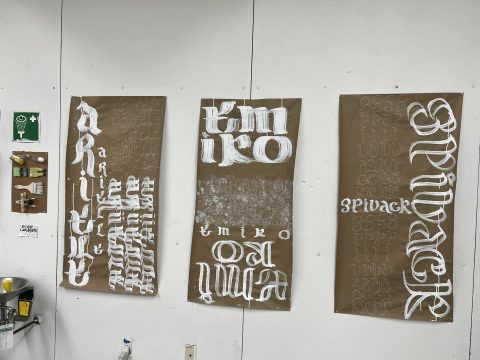