This piece is a set of brown paper tapestries painted with white acrylic ink and a gel pen. I also have the tools I used to make the piece mounted beside them.

For this piece, I was really interested in exploring calligraphy even though we didn’t have a very long time working on it in class. I was looking forward to learning different writing styles and working with handheld ‘drawing machines’ compared to the more tech-based machines we’d explored previously. I was also interested in breaking down the function of the calligraphy nib or brush because there is such a variety of calligraphy tools.

For this project, I started by practicing different calligraphy styles, I eventually started mixing gothic and old English styles to make letters I liked. For tools, I used an assortment of sponges, tools, and brushes, then I experimented with breaking things and putting things together. The tool that took the longest was my gel pen contraption. I wanted to recreate the way that tines on fountain pens can spread apart and make thicker strokes depending on pressure on a bigger scale. I ended up making a little accordion by gluing lots of small tiles of cardboard together and crushing the fluting down to it could bend in an arch. I glued that between the ends of two gel pens so that the pen tips met together in a point, secured by a rubber band. I secured that between two popsicle sticks with a cylinder glued to sit under the pen tips, pushing them apart when you push the popsicle sticks together and coming back together when you release.

When I felt like I had enough tools I took white acrylic ink and demonstrated the different stroke patterns and letters by using the different tools to write my first, middle, and last name on large strips of paper.

This project was a little difficult because I wish I had more time with it, especially with the presentation. I feel like there is a better way to demonstrate the tools, maybe with more layering and colors, or maybe so that people could watch the tools as they draw. Still, I got a lot of really interesting study out of this project, and calligraphy has been something I’ve wanted to get into for a while so I really enjoyed getting to know the genre a bit. 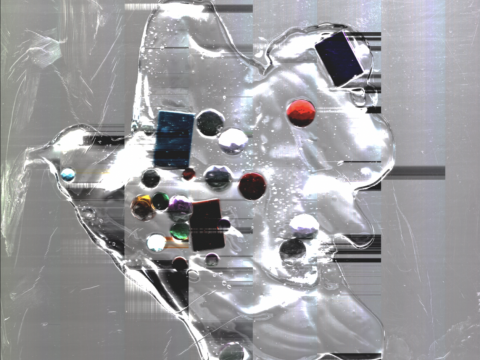