Each of these pieces contains a flavor of dissociation, most notably through their distortion of form and color. The human form is a subject in each; although obscured, bodies are most recognizable in fishbowl I and fishbowl III, and almost fully abstracted in fishbowl II and shibuya. The latter two are similar in their perspective, depicting one’s perception of the crowd; with the former two showing a perception of the individual. I did not want to objectively specify where the perception is coming from, as in all of these both inward and outward perception may be present.

Today we live in an aesthetically hyper-aware and individual-centered world where it has become a recurring theme for life to be filtered through the polished veil of social media presences. Although the awareness of this is also surely present in the minds of many, the notions of being genuine and true to oneself are becoming harder to define. I find it fascinating, and have observed in my own life, that even places of deep reflection or total non-reflection do distortions of the self occur, and I wanted these works to show that in their literal disintegration of subject.

Fishbowl I, II and III are portraits and self-portraits created with a digital scanner. The title “fishbowl” is a reference to ever-present feelings of being perceived, by others but most importantly by oneself. I wanted to avoid assigning negative or positive attributes to this perception, as I surely don’t believe that hyper-awareness of self is an inherently good or bad thing. Shibuya is a still from a video datamosh that I created from footage of the Shibuya crossing, one of the most crowded pedestrian crossings in the world. The data mosh is a much less controllable medium than the scan, so having concrete intentions with the piece was slightly more difficult—but I think my original intention for the sea of bodies to meld into each other was a success, with the random addition of intense color as an added by-product of the glitch.

These works are united in the overarching thematic dichotomies of self perception/being perceived by others, isolation/crowd claustrophobia, and being grounded/detached. My relationship towards daily routine and mental health saw a monumental shift as a result of the pandemic, and I think as a result anxiety, perception and inner vs. outer reality have been recurring motifs in almost all of the art that I create—whether consciously or not. 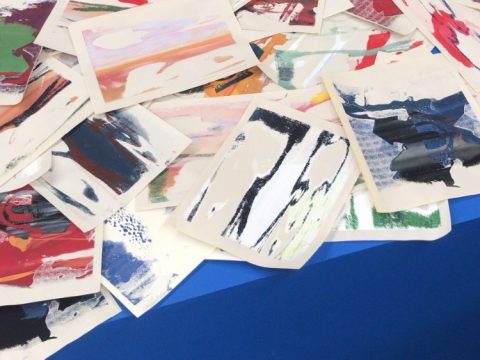