A few months ago I went on a family trip to Spain. We were taking a tour in Segovia when I saw this small book shop in one of the streets. I went to take a look through the glass and I saw a book called “Boulevard” by Flor M. Salvador, I asked my mom if we could go in and buy it but the store was closed. I got a bit upset by that but my mom reassured me that if we saw it again she would buy it for me, and with that promise made we went on with the tour. Two days later we went shopping for souvenirs and I found the book in the mall. I bought it because it was the book that was all over my tik tok. It made me desperate to read it and see if it was as emotional as they made it out to be. As soon as I got back home I started reading it and it changed my point of view of the world completely. Therefore, I wanted to create something to commemorate this book. I thought of many ways that I could do that but none of them seemed good enough. Eventually, I got the idea of creating a catapult that would throw balloons filled with paint and it would create a piece of art. After that I thought that it was a good idea to try and incorporate the book into that concept of the catapult, therefore, creating a poster.

I started to picture how the catapult would look and I made a prototype. After I finished it I tried to find tiny balloons but I couldn’t find any that were the size I wanted so I started to look for the next best option and while I was making lunch I accidentally broke an egg. This gave me the idea of using eggs instead of balloons. So I went to the store and I got a pack of quail eggs. I chose these ones because they were small and it meant that the content inside wasn’t a lot and that the number of eggs that I was going to use I would be able to eat later. I washed them and made a small hole in order to get all of the content that was inside out. After that I took some water and put it inside the eggs to fully take any residue out and get them extra clean. I left them for a second and started to mix some paint with water that would go inside each egg so that when they broke the color mix would splatter around. I made my first small poster and something that I noticed was that the base didn’t feel stable enough and it needed more force in order to break the egg. On my second try I made my best effort on getting the base more stable once I got that I started to research how I could give it more force so that the egg would fully break. I found that my best option was using a rubber band so I incorporated one. I made some slits on the sides of the stick in the middle so it wouldn’t slide through. With that done I got some of the same quail eggs but I also got some normal chicken eggs to see the difference between the two of them. After getting them clean I went to my backyard and put my paper on the side of my house and started throwing the eggs but little did I know that the paint would get on the wall which I would eventually have to paint. So after I saw that the wall was getting dirty I decided to put the paper on the grass floor so my mom wouldn’t get mad and I noticed that it took me too long to charge the eggs one by one to the catapult. Therefore, I made a new one. This time I put three little cups instead of just one. I tried keeping the base the same but after adding three cups it seemed a bit unstable so I just started again and this time I made the base wider so it had more stability. This seemed to work a lot better and to test it out I went to my nearest shop and got some more eggs. I got two packs of 18 eggs and two packs of 12 eggs making a total of 60 eggs that I have to fully clean. This took a lot of time and by the time I finished taking all of the content out I was regretting all of my life decisions and wondering why I chose eggs instead of something easier to clean out. Since they were a lot bigger I made the hole a bit bigger so the water would just get in instead of me having to physically get it inside of the egg. I submerged them in warm water, shaked it a bit and turned it upside down so the water could get out. I decided to do it three times and even if it would have been fine with just two times I had to make sure that they were extra clean. I left them on the side and did the same mixing of water and paint. I filled them a bit differently. Some I put more of this mix than others because I noticed that the weight also influenced how far the egg would go. Finally I went to my backyard again. I made some guidelines in order to write the title of the book and let it dry for a bit. A few hours later I went back outside and started loathing the catapult with the eggs and I would either put three eggs or just two in different holes and just mess around where I put it in order to get the whole paper covered in paint splashes.

This was a very sentimental project because as I said this book changed a very important side of my life and I just wanted to create something pretty for it and the characters. I feel like they deserved better and it was just sad what happened in their story. Something that was completely unintentional was how the word gets a bit messed up. Like at the beginning in the “boul” the colors are very bright and the black ink is not so messy but by the “eva” part the colors get a bit darker and finally at the “rd” part the colors go back to being very bright and colorful. This was all made by the machine. I didn’t expect it to happen and once I was done I looked at it and it made me feel like the poster was trying to tell the story, because at the beginning the story is very bright and positive and then things start to get rough and finally instead of having a happy ending we got a half happy ending. Another thing that happened was that there were some small egg shells on the poster that I could get out because the mix of water and paint made them stick to the paper but I thought that it just added a nice touch. Finally I felt that since the poster was already kinda telling the story I would add to that by writing some quotes of the book that I thought were nice, I used two different types of calligraphy pen that I had just because I wanted to see how it would look if I would try to write normally instead of doing actual calligraphy. 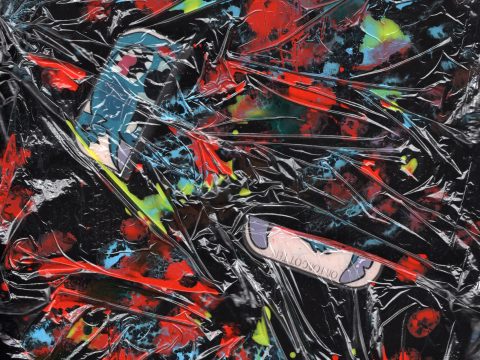