The title of my film is Nevruz. The film was made using the Epson scanner to scan each individual frame, accumulating all of these images into a video through stop-motion editing technique. It begins with a red circular character, inspired by a Turkish evil eye (nazar boncuk), which interacts with the world around it in many ways, helping along the process of ending the winter and bringing spring into fruition. A little frame of scenery comes into view, with a little wall covered with snow and a bare tree stump. A group of clouds comes into the scenery, preparing for a storm. Some snow falls, piles up on the ground, then melts away. The film skips to another frame where you can see the moon revolving around the earth. It diverges from a regular gravitational orbit and moves off-screen. The film follows the earth into a new frame, where it seems to jump around erratically and glitch, going into reverse. The same series of events happens backward until the earth is returned to its regular orbit. The film then returns to the same scenery, and you can see the sun rise then set, and the moon and stars emerge. Once the moon disappears from view, the narrative shifts away from what one imagines a natural series of events would be. The stars begin to fall from the sky onto the ground, similarly to how the snow fell in the scene previous. They begin to group together and out of this group of stars a bigger, red star emerges. It slowly rises and moves around erratically in the sky, then slowly begins transforming into the evil eye. The evil eye has returned to the story, and the scenery disappears from the background. The evil eye moves on screen for a few seconds, in search of something. Slowly, a fire starts around the eye, and it slowly transforms into a big, bonfire. A small shadow figure comes into view, approaching the fire. The figure attempts to jump over the fire and manages to do so with the help of the evil eye. Once the figure jumps over the fire, they begin walking away, in the other direction. The film’s view travels with the walking figure, and slowly, small bits of grass and flowers begin to pop into view. The figure bends and picks a flower, and slowly walks into the same scenery as from the start of the film. However, the scenery has changed slightly to depict the wall and stump in spring, with moss and grass that was not previously there. The sun crosses the sky once again—this time in the other direction—and the daylight seems to last longer. Instead of the moon coming next across the sky, the red evil eye can be seen. It diverges from its path to take the flower that the figure offers it and disappears once again. The figure then leaves the scenery and frame. The film then skips to the final segment, where the sun begins to revolve around the red evil eye. They eventually join together, ending the film.

My motivation to create this film came from a desire to create stop-motion animation in an unconventional way. I wanted to see if I could use the scanner to make effects that might be difficult to create with another method. I wanted to put as much machine influence into the film as I could while also making sure the narrative came through properly. I was inspired to depict this tradition/holiday because I brainstormed my conference project right around the spring equinox during the semester. I had the idea of a figure jumping over a fire—which is something often done on this holiday—and the idea grew from there.

The process of making this film was quite tedious. Stop-motion animation is a long process, as every frame needs to be exact and look synchronous with the others, while also being made in an efficient manner. I would have to move something minutely, scan it, move it again, scan it, and so on. I often got stuck with what should come next, and often came up with what I wanted to do next on the spot or an idea would come to me during the making of another part of the film. With conference feedback from my class, I was able to come up with some new ideas to lengthen and improve my film overall. I ended up with about 1000 scans total and spent probably 50+ hours on this film.

I really enjoyed making this project; I appreciated the creative freedom I had with the film and the challenge it presented me with. I was happy with the narrative and themes I picked, they had a lot of meaning to me personally as they were traditions I’ve had since my childhood and hold a lot of cultural value for me. It is also the first film I’ve ever made, and I’m proud of the way it turned out. 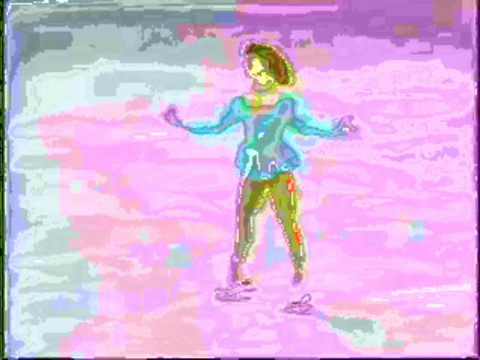