The culmination of my conference work for this class is a twelve-image series titled “What can we find on a night walk in the woods?” I explore curiosity, discovery, wonder, and the senses through the setting of a night walk out by yourself in the woods. What is under that rock? Is there anything behind the tree? I spy some insect tracks – where do they lead? Was that a splash in the water? What was that sound down by my feet?

It is a rare occurrence to be completely surrounded by nature, and there is a special sort of childlike wonder reserved for experiences like those. When you have no other distractions, you begin to notice little things about the world around you that would normally go unseen – the way that the bark of a tree moves in many little channels down the trunk, the tiniest ripples in the water that suggest some sort of small creature is living just beneath the surface, the ripple of the patterns on a slug’s back. The images that I’ve created attempt to capture these patterns and their inherent fluidity and movement.

The project grew out of some earlier experiments with a photo scanner, as well as some code-based work involving flowers and growth that I had done for a previous class. I became invested in using the photo scanner during our early sessions with scanners at the beginning of the semester, and was especially inspired by the unpredictably organic and quite beautiful patterns and forms that you can make when you incorporate movement while scanning. I used movement a lot with physical objects for some earlier scanning assignments, tracing different objects over the scan head at different speeds as it moved across the surface of the glass.

I wanted to see the results of manipulating a digitally created image over the scanner as opposed to physical objects, so I used some images created in the program Processing that I had produced for my flower piece last semester. I began to notice the resemblance of many of my scans to patterns occurring in nature – some earlier ones were the curve of a pitcher plant and the twisting and turning of root systems. This led me to create some images in Processing with more natural color tones to use during scanning, and these were used for the final series. The theme of “night” naturally grew out of this experimentation, as I was not pleased with any of the scans that I made in a lighted room. The final series were all done in a dark room to have the black background behind the images.

The images are titled, in order:

Evidence of a Termite

Something in the Water 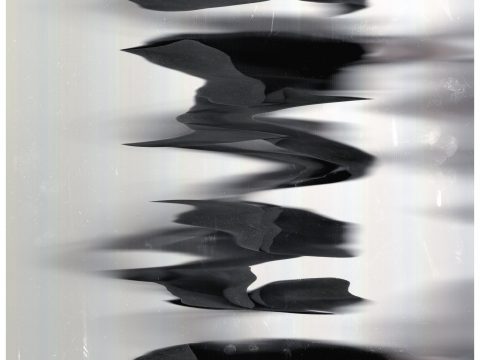