This is a still image from my first rescan, where I focused on dancing as a subject (the original video that this image came from was the crab rave video). With my rescans, I mostly decided to work with different themes. For example, the theme of this rescan is dancing, and more specifically than that, dancing in animation, while another one of my rescans has the theme of time passing/growing older. To make this rescan, I rescanned a bunch of different clips from various animated dances, messed with the playback speed and video settings, and rescanned at least 2 more times per clip, then I edited them all together. When getting rescans I stuck mostly to this strategy (find clips according to a theme, mess with settings, rescan, repeat), although in arranging one of my other rescans I had one rescan continuously playing for the full two minutes and overlaid other rescans onto it. This rescan was the first ever work I completed for this class, and is thus special to me since this class is out of my comfort zone, and completing it made me feel more confident in doing things I wasn’t fully sure about.

This is a glitched image that is part of one of my databend videos; the original footage came from the intros to the Mario and Sonic at the Olympic Games game intros. When making my databends, considering the assignment was to make the videos as different looking as possible, I decided to use a variety of subject matter that I found interesting and thought would lend itself well to databending, some examples being the Call Me Maybe music video, a video of jellyfish, the Let It Go animation sequence from Frozen, and, as mentioned, the intros to the Mario and Sonic at the Olympic Games Games. I hoped the variety in the subject matter would make the effects look different, even if I used some of the same ones. To make my databends, I used a youtube to mp4 converter to download videos and trimmed them to a little longer than two minutes since they tend to shrink after going through Audacity. Then I converted them to raw files through Avidemux, put them into Audacity, and added some effects. I tried to vary the effects I chose and how I used them (for example, in this databend I put one effect over the whole thing then overlapped two others over parts of it so they met in the middle but only some of the video had three effects), and once I was satisfied with the effects I had added, I converted the raw file back to a video using vlc. I really enjoyed making the rescans, as though I was the one adding the effects I didn’t know exactly what they would do, so I ended up handing over a fair bit of control to the computer, which seems very relevant to the purpose of this class.

This is a scanner image of thumbtacks in a plastic tray that I created using a scanner. When first starting out with the scanner, I had a lot of different ideas; for this image I decided that I wanted to experiment with motion. Because of the nature of a scanner, it captures high quality images and motion, and the contrast between the high quality of a still image and the lower quality of the motion can create some really interesting pieces. To create this particular scanner image, I filled a plastic tray with water and put a few drops of dye in so that the water would have a slight color to it. Then I poured some thumbtacks and some salt (to provide another visual element besides the thumbtacks) into the water, and moved the tray as the scanner line moved. Working with the scanner was really interesting because of the variety of input the artist can have versus the machine – unlike when making databends, where the machine has a pretty constant level of control, when working with a scanner the artist can either meticulously arrange items to create what is basically a higher-quality photograph, or they can move the items they arranged, trusting that the machine will capture the motion in an interesting way. I really enjoyed getting to experiment with different levels of control, and though I think my favorite piece ultimately ended up being one that I arranged and did not move while it was scanning, I ended up liking how this piece came out as well.

This is another scanner image, this time of salt, cling wrap, and blue dye. This was the intermediate stage of one of my attempts at the series assignment, and I decided to add the blue dye because the salt was a little boring on its own, and the white background because it didn’t show up as well against a black background. To create this image, I covered the scanner with salt, and then added cling wrap which I carefully put blue dye on top of, then finally I covered the dye with another sheet of cling wrap, and covered the scanner. Making a series with the scanner was an interesting experience because I struggled with making my pictures distinct enough from each other that it would be noticeable, but keeping enough of the elements from the previous picture that it was clear that they were related to each other and had a natural progression. I don’t know that I was totally successful in creating a coherent end product, but I feel that the experience of creating the series definitely made me more mindful about my art.

Finally, this is a self-portrait created with the scanner. My first couple self-portraits I made with the scanner were largely static because I was interested in the high definition, but for this one I decided that it would be interesting to experiment with motion and see how the scanner distorted my portraits. To create this image, I held the scanner up to my face and, as it scanned, moved it across my face so it captured some motion and also both sides of my face. Making self portraits with the scanner was interesting both because of how high definition the scanner is capable of producing images and because of the way the scanner captures motion. I’ve taken selfies before, but using the scanner to make self portraits was more interesting because I put more thought into what I was going to do before I did it, and on the ones involving motion, I was more surprised at the input. This portrait is not my absolute favorite, but I do like how some parts are really high definition and some are blurry, and how the scanner light almost looks like natural light despite the fact that I was scanning in the dark in the classroom. 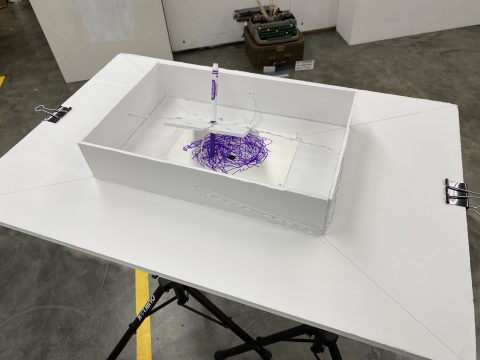