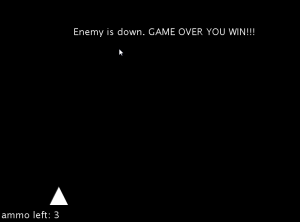 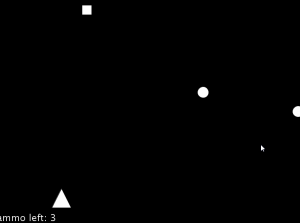 Our game is an abstracted sort of hostage scenario simulation.  We’ve created the player-controlled triangle, the enemy square and the neutral circle(s), all white against a black background.  The concept is that when the screen/mouse is tapped (which is the player’s only input), the triangle (who in this case is a cop or something) fires a shot and instantly kills the object directly above him.  The aim is to not hit any circle-hostages (which we’ll soon create more of) and to wait for the right moment to tap/click, killing the enemy square and then maybe advancing to another screen.At present, all objects are bouncing back and forth across the screen horizontally.  We plan on adding circular motion as soon as we figure out how to include it in the same class as the bouncing circles.  We also want to try and make some collision/bouncing happen between circles, which seems like it’d be characteristic of panicky hostages running amok.  Where we’re running into problems is widening the target area (hitbox?), or the invisible line/column between player and target that determines whether you hit or miss.  Right now the objects technically only cross each others’ y-axes for something like a millisecond, which makes the central mechanic almost totally dysfunctional.
Possible addition: Make everything invisible except for whatever passes through the triangle’s column of vision, forcing the player to do estimate where everyone is, heightening tension and making things more difficult.  It may also be fun to limit the number of shots the player’s allowed to take. If done effectively a one-shot game could be a lot of fun.

That covers the interaction design but not player choice, which so far is the least-developed element of the game (this will change once the basic skeleton is working as it should).  Right now if you tap at the right time and ‘hit’ a circle, text appears for a moment that says “Hostage is down” or “Misfire” or something to that effect.  However there is no consequence for doing so. Neither is there any feedback for ‘hitting’ the enemy square.  One concept that we’re messing with, once the basic skeleton is moving as intended, is using the postmortem negative space of the game screen to graph all the dead shapes.  The coordinates at which they died could remain filled-in in the next round, and those spots might then become walls/obstacles for characters to bounce off of or hide behind.