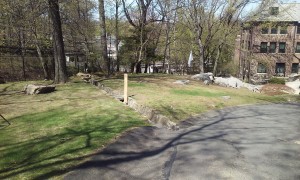 [The site seen from the main path]

My marker offers a sort of communication in an otherwise unused space on campus, combining dissonant elements such as the technology of the QR code compared to the simple wood. Additionally, the QR code is hand drawn which further disassociates the high tech aspect from its execution on my marker. Hand drawing the QR code is revolutionary because it’s technology being used outside the system. The technology itself brings about an at attempt communication: the marker asks for your name and requests that you talk to it, a very human interaction. 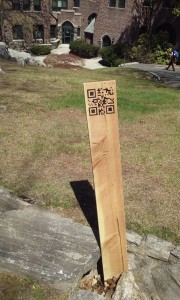 The figure drawn on the ground in front of the marker indicates a human entity at work, but one that has been removed from the site and is no longer physically present. The site itself is very human-constructed, bisected by a drainpipe, but people usually stay on the cement path. The marker also looks like a standard terrain marker such as one might encounter while traveling, but it doesn’t help one to locate oneself. The board itself is held up with natural materials (large rocks found in the area) in a manmade drainpipe. 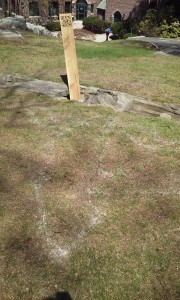 [The figure worn down after a week of presentation]

It is my intention to see if I can record any of the interactions with the marker. I received a blank text message, several hangup messages, and one person who when prompted for a name responded “Noooooooooooo.” 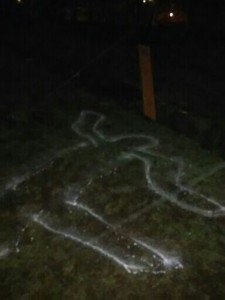 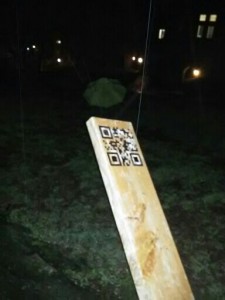