Fusion Reaction is a very simple black and white game, which only uses three components. The user starts off with this screen: 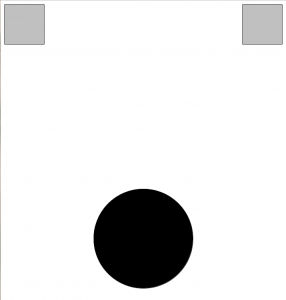 The user must figure out what to do to cause the titular “reaction.” 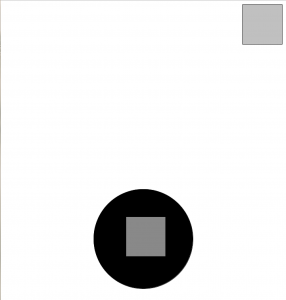 Both of the squares are draggable, but only the one in the upper right hand corner causes the “reaction.” The user knows they have won when both squares disappear, and the large circle moves into the center of the screen and begins spinning, as is shown here: 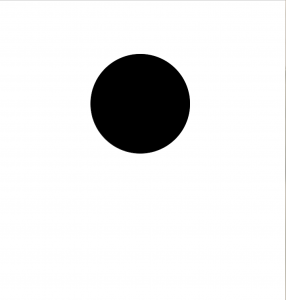 I chose to make the two draggables squares, as that reminded me a bit of a building block, and the user is attempting to “build” a reaction. The circle reminded me of a pot or cauldron, and it is bigger than the two blocks in order to indicate that the blocks must be placed inside of it. I chose to put the larger circle at the bottom and the two smaller squares in the upper corners in order to lend a balanced feeling to the game, by placing the “heavier” object on the “ground,” and the “lighter” objects in the “air.” The vertical symmetry in this design is pleasing to the eye, and the fact that the circle is approximately the same size as both squares means that the screen is visually balanced along the horizontal axis too.