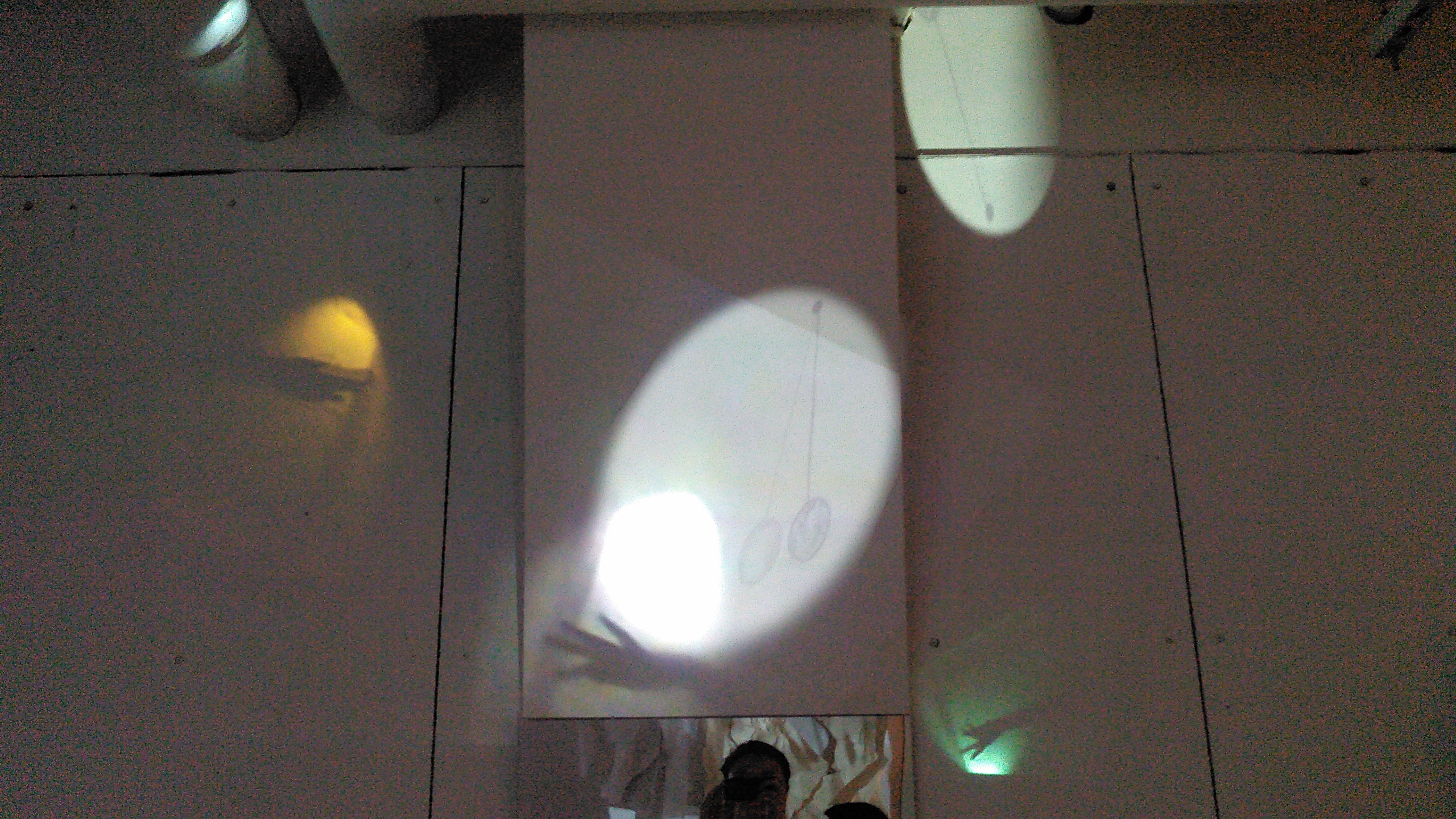 I grounded my thoughts for this project in two fragments of theory:

“The future is necessarily monstrous, the figure of the future, that is, that which can only be surprising, that for which we are not prepared, you see, is heralded by a species of monsters. A future that would not be monstrous would not be a future; it would already be predictable, calculable, and programmable tomorrow.” – Jacques Derrida

“The logic of monsters is one of particulars, not essences. Each monster exists in a class by itself. Monsters may, however, generate entire classes of beings.” – Alan Weiss, 10 Theses on Monsters and Monstrosity

With the paradoxically linked concepts of uncertainty and specificity in my mind, I embarked on a lot of research. In Angela’s words, I “ate culture” – I examined the work of horror aficionados, fans of monsters, and various public artists for cues on how to bring my passionate appreciation of these theories into artistic reality. I watched Pan’s Labyrinth and the entire first season of True Detective, scoured Guillermo del Toro’s Twitter feed for vintage monster illustrations and film recommendations, read the first three chapters of Frankenstein, gouged myself on Hans Bellmer photographs, and read arabellesicardi.com/tagged/girlmonstering from start to finish.

I found myself fascinated with the grotesque’s presence in horror, and with horror’s palpable foundation in the viscerality of the everyday. I focused on the feeling on the back of your skin when you see an abomination, something that’s inherently wrong. The first abomination that Western civilization tells us about is Cain in the Book of Genesis, who lives with his unnatural act marked on his forehead for the rest of his life; its first introduction into modernity is Mary Shelley’s Frankenstein; but my first association with that sort of visceral, felt wrongness is the Pale Man in Pan’s Labyrinth. Despite how impossible it is that such a creature could exist, it strikes us as real because it is grounded in the realities of the human body. Its lips purse and clench so as to obscure any mouth, its flabby skin hangs from his bones and congeals onto itself in folds, and its head is such a pale, skull white that the red outline of veins and the bloody contour of its nose are the only color visible on it. The Pale Man is an amalgamation of contradictory human characteristics, which are then magnified to the point of horror and then combined into a startling, impossible juxtaposition. The elements that compose the Pale Man are so contrasting as to almost be incongruous, and yet the character design is so grounded in the human body that what should come off as absurd (the swinging of his flabby skin as he chases the girl down the hallway, the incompleteness of his face) is instead absolutely terrifying.

I concluded that the grotesque is powerful because of its specificity in riffing off of the material world (please read “material world” in Marx’s terms and not Madonna’s). The details that form the foundation of body horror are familiar to anyone who suffers from the everyday aches, pains, and indignities of having a body. The brilliance of the grotesque is that it channels material conditions into a distortion that still rings true. And while the grotesque and the hallucinatory are distinct, separate entities, they are united in their need for specificity. Hallucination is sibling to the grotesque through their shared parent, mesmerization. Hallucination is poetic, dreamy, while the grotesque is shockingly visceral and specific. Both make a bid for the casual observer’s attention at the subconscious level. As the participant in the grotesque or hallucinatory experience, you’re hypnotized – more frightened of looking away than of what stays on screen (because the thing that haunts us has the ability to escape the confines of the screen).

We are haunted not by the abstract or unknown, I realized, but by specificity – repetitive and unexplained poetic moments that allude to unarticulated fears much larger than a single image. The line between the grotesque and the hallucinatory is viscera. Hallucination is a whisper; the grotesque is a scream. So if the grotesque is a sculpture – a visceral, physically felt object – then a hallucination is a video, an illusion created across the wall of the classroom or a spectre that exists as long as the lights stay off. And I distinguished between them in another very important way – the grotesque is alienating, while the hallucinatory is often pleasant, if unsettling. Sherrie Dobbs, during the class visit to Times Square Alliance, commented that while it’s very easy to use art to make people angry, her interest was in art that asked questions and started a conversation. The Handbook for Conjurers tells us that the importance of illusions lies in the fact that they are open to multiple interpretations – in Sherrie Dobbs’ words, that they are conversational. I view hallucinations as art that starts a conversation.

Another important insight I drew from The Handbook for Conjurers is the distinction between an illusion and a trick, because an illusion is vested with meaning and connected to the narrative that the conjurer creates, while a trick is a singular, unconnected event. Meaning is derived not from the concrete but from narrative, and narrative is in turn constituted by pattern and repetition. Readings from The Handbook for Conjurers gave me the technical challenges that I needed in order to put my theoretical musings on the grotesque and the hallucinatory into action. Thus, my primary technical concern was the creation of a specific, hallucinatory narrative via footage that utilized visual pattern and repeated often enough to hint at hidden meanings.

I played with shapes and tried to create tension using different speeds of footage juxtaposed on top of one another. I created narrative through the visual motif of roundness, first articulated in a pendulum motion like the ticking of a clock and second in a rounded spotlight, which drew attention to a shadowy hand in motion within the circle.

Chris Doyle’s Midnight Moment “Bright Canyon” and its use of movement inspired my map. He synchronized the movement of the animation across every screen, so even though there were a variety of different characters, colors, environments, and shapes, the motion they shared unified the space it was displayed in.

I wanted to literally create a map over the space I was given to play in – a topography of the unseen corners of the building, engaging with the nuances of the space.

I was interested in animating utilitarian areas that are so boring on a surface level that the brain skips over them. And in the space that I was using, there were big pipes painted a similar color of white. I put a clip of the shadowy hand moving across one of the pipes, but only visible from certain areas so that it would pop in and out of the audience’s attention, calling them to shift around the space and deepen their viewing experience.

Part of that literal map of space was developing a map of the space on paper that I could take notes on and modify. Whether or not I was successful in creating a decent system of notation for projection work, the first steps of my hallucination room developed in my sketchbook.

And finally I realized that shadows and the unseen are just as important as the footage that you use. I was reading Bresson’s Notes on the Cinematographer during this period, so half of my decision was influenced by his note “be sure of having used to the full all that is communicated by immobility and silence.” The other half of my decision to emphasize silent, quiet space stems from the TS Eliot quote “Light. The visible reminder of invisible light.” I wanted to evoke the invisible shadows that are hidden within our world alongside the invisible light that Eliot conjures — because darkness is a necessary element of the material world that I engaged with, and of the nuances and specificities of the classroom space that we ultimately worked in.

My major critique of how the piece turned out was the utilization of space in the classroom. I spent so much time thinking about the ways that haunted houses function that the disorganized structure of the classroom struck me as off.

My secondary critique of my own work is that it would have functioned better had I taken more of the footage that I wrote down as a possibility. I have lists of shots and footage that I thought would work well with visual themes I’d already established – hands, circles, disintegration/time – but unfortunately the constraints of real life prevented me from recording any more footage this time around. However, should I restage it in the future (or make more projections around a grotesque or hallucinatory theme…) I would definitely shoot and incorporate that footage.