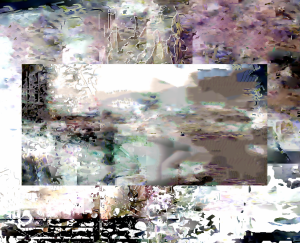 For this project, I intended to make a process-based series of images with abstract and figurative elements using a simple, turn-based method. My materials were minimal, just a piece of photo-paper, a pen, a hi-lighter, and a scanner. I began by drawing a simple square in pen on the photo-paper, accenting it with some hi-lighter ink. I scanned this sheet into the scanner in four parts, thusly some of the scanner’s interior was imaged along with the paper. I put the images into one photoshop document as four layers. I then re-arranged the layers into a sort of overlapping collage pattern. When I was satisfied with the arrangement, I used Photoshop’s auto-blend, which attempts to make a coherent image out of all the layers selected. As I had disorganized the layers, this was impossible for the program, and so it resulted in an abstract, glitchy rendering with emergent transparencies, unexpected colors, and strange, warped shapes. The program also produces or adds new layers as it sees fit, resulting in more or less puzzle-pieces for me to arrange. I continued “taking turns” with the auto-blend algorithm, re-arranging and blending, until the image looked completely unrecognizable, totally unlike its source. Some early versions are below, and a later version is above. The goal of the program algorithm, all the while, was to make a “coherent image,” and mine, all the while, was to make a figurative image. I wanted to make something that appeared like a human body. 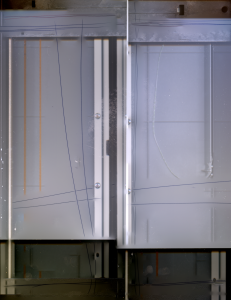 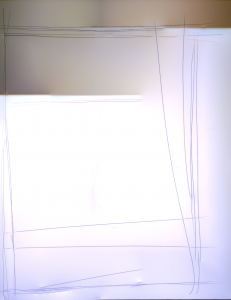 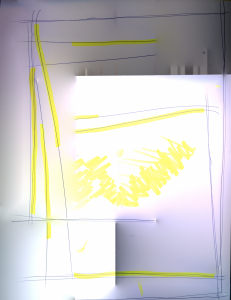 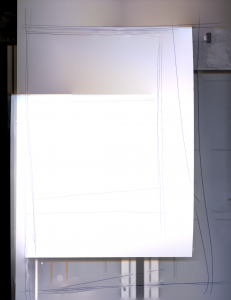 Ultimately neither of us quite succeeded in our goal, but the result was interesting nonetheless. The process, the game I was playing with the machine, actually made me see in a different way. I began to see the inkling of figures at some moments (visible in the examples below), but I also saw landscapes emerging. The process became immersive, and each step seemed to open up onto a landscape in a new world that I could explore endlessly, turn-by-turn. It was kind of crazy, but this was my experience. The image at the top of the post, in particular, marked a turning point. This rectangular space at its center looked uncannily like a landscape to my tired, immersed self, and only after that image did I end up producing the images below, which appear to me like scenes in some kind of fantastic tale—sci-fi cityscapes and mischievous characters popping up before my eyes.

I hope to continue playing with this sort of “drawing” process, and a fantasy of mine has been to actually write a narrative to go along with some of these images, to produce a sort of graphic novel. 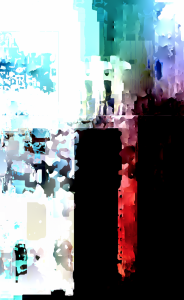 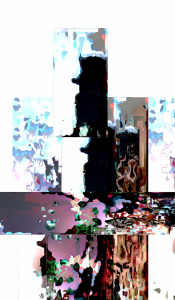 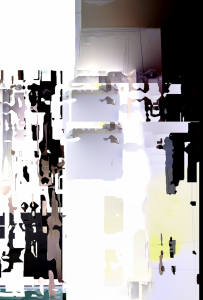