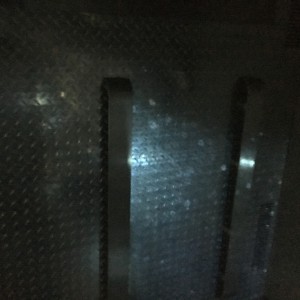 In Physics, the term ‘singularity’ refers to the phenomenon of all things colliding into a singular point. Theoretically, the singularity occurs at the middle of a black hole where the strength of the gravity is greatest. The gravity is so great that, at the Event Horizon, not even light may pass through; that is what creates a black hole. This means that past the event horizon, there is no possible future as light cannot move forward. As the mass is inevitably pulled toward the singularity, it is torn to shreds by the sheer gravity of the point. Eventually, all particles that enter the black hole must move toward one point; there is no longer a past, and no other future— the only singularity.

“Singularity,” or as my classmates know it “The Elevator,” was an experiment in space. Using Kluszczynski’s Strategy of Network, I wanted to create a space for pause and interaction on a mental and physical level. The idea of The Network is that interactions between participants is the formation of the interaction of the art. In this case, I was eager to have participants not only interact with each other but themselves. This was the intention of “Singularity.”

“Singularity” was also a product of my own trauma. In February, I was sexually assaulted by my partner. For many weeks, and still to this day, I suffered greatly; I often re-lived the assault and other past traumas, was unable to focus on work or entertainment, and visited therapists daily and then weekly. It was difficult for me to leave my bed for several days and still now I have trouble eating regularly.

The idea for this piece happened one night as I laid in bed. I wished, desperately, for a reprieve from my own thoughts. I wished for a place where the world would stop around me so that I could grieve, rebuild, and carry on. That feeling of loss, pain, and hope is what created “Singularity:” a place where time and space did not exist, only the sensation of moving.

When it came to constructing my space for healing, I wanted to encourage people to reflect on themselves. However, in order to reflect, I wanted to give participants the opportunity to enter the space with me. In order to invite my guests, I developed seating in the form of a large, communal bean bag and a projection that was intended for the ceiling. This would make guests focus on a plane that they don’t normally interact with: the above. The projection featured a starscape that infinitely propelled forward through space, featuring stars and planets of another time. The purpose of this projection, my Event Horizon, was to allow guests to feel as though they were moving forward, even if they may be standing still.

Originally, this piece was made for a much larger space. However, given time and practicality, I chose to move it. My ideal selection was the silver elevator in the Heimbold building at Sarah Lawrence. This elevator was massive and moved three floors, so it was ideal for all the components of my installation. 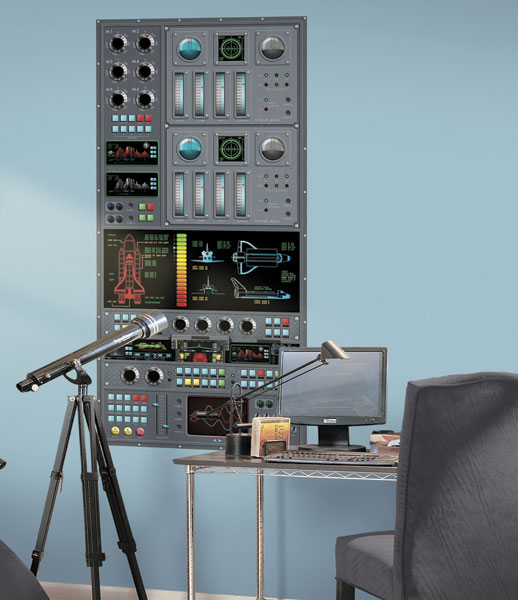 The theme for the Art Party that this work was featured in was space, which was very convenient. To match with the theme, I planned my aesthetics to feel simultaneously comfortable and futuristic. The result of this effort was an elevator covered in reflective mylar. 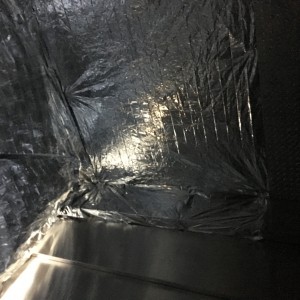 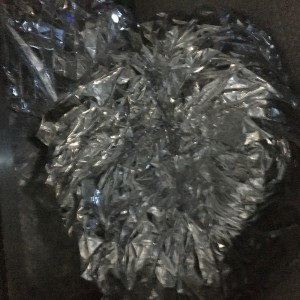 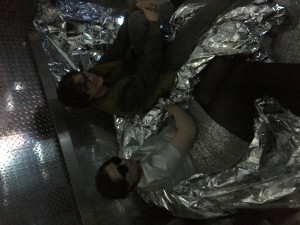 I had a deep interest in multi-sensory artwork. After reading selections from Design for Peripheral Interaction by Saskia Bakker, I focused my work on using auditory information as a way to stimulate the participant’s ability to divide and focus their mental capacities, or, multi-task. When choosing what audio to add to my projection, I thought very carefully about what I wanted my guests to feel. I chose to manipulate a public-use recording of Esti Dal by Kodály, a famous Turkish song. I chose this piece because of an English translation I heard and learned years ago:

This song encapsulated the exact sense of safety and momentary belonging that I wanted guests to feel. I manipulated the song so that it the singing sounded more mechanical. The end effect that I wanted was something between the sound effects of the gears of a spaceship and the low drones of meditative musics. Esti Dal served this purpose perfectly, and the audio was later looped for the video. 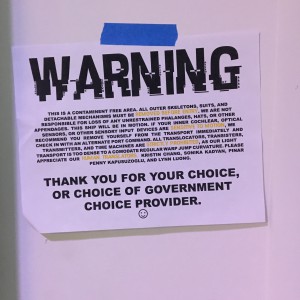 My other concern for this piece was the framing. I read The Two Magics by Nelms early in the semester and was immediately concerned with how I would dress my next project. It was important to me that the ideas that went into the project were both communicable and fun. Using the power of social media, I reached out to several friends and asked them to help me translate ‘welcome’ or ‘hello’ into multiple languages. These words were then added to the beginning of the video, to officially welcome guests. I also crafted a warning sign, as I was concerned about people’s ability to move through my piece. Both of these supported the intergalactic feeling that “Singularity” required. 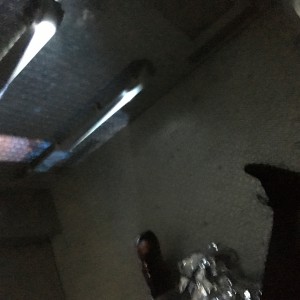 Surprisingly, this piece was a hit.

I checked in on my elevator several times throughout installation night, and not once did I see it empty. In fact, at one point, a party of approximately twelve people were in the elevator, lounging and talking. I could not have asked for a better reception. The mylar was dynamic and moved as the elevator changed floors; the projection, now moved to a wall, was mesmerizing and beautiful; the sounds of the moving elevator complimented the squeaks and groans of my edited Esti Dal.

Most importantly, as I sat in the elevator at the end of the night, I felt at home. “Singularity” was a space of my creation, intended to bring peace or piece of mind to any guests who would join me at my Event Horizon. And, strangely enough, they did.