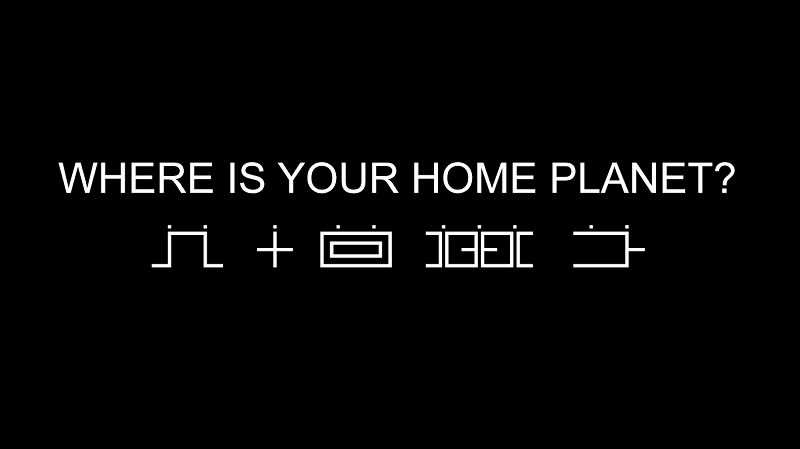 When I started in New Genres, I was determined to make a game. My original idea was to create a visually simplistic, text-based narrative that the user would progress through by answering questions. After reading “Strategies of Interactive Art” by Ryszard W. Kluszczynski, I learned that games aren’t the only cool way to create an engaging and thought-provoking interactive experience. For now, I put my original idea aside.

Once we decided on the theme “Supernova” for the Art Party, the rest of my idea began to take shape. As a lover of linguistics, my mind went straight to alien language. I could stick with the idea of asking questions to my audience by writing them in a language of my own creation and translating them into English. I later decided I would create a slideshow of questions and proverbs to display with two projectors simultaneously.

I started off by brainstorming a set of symbols with which to build my language. I wanted the symbols to look different enough from the latin alphabet but still recognizable as a language to my audience. I decided that they would be composed only of straight lines and could be strung together without spaces in order to form words. Pictured below is an example of the first version and a string of random symbols.

The next step was to create a font so I could type my language. I used fontstruct.com, a website that I had never used before but was easy to figure out. This is an example of what the interface looked like as I drew each letter:

While translating my hand drawn letters into their digital forms, I discovered that the diagonal lines weren’t working as well as the horizontal or vertical ones. They looked strange and out of place, so I wrote new characters using horizontal and vertical lines only. I also realized that it would be difficult to tell where one symbol began and another ended when they were all strung together, so I added a dot centered above every symbol to make it easier for the reader to discern. Finally, I decided to make one symbol for every letter in the alphabet so I had enough of a variety.

One problem that was troubling me as I worked on my project was, what does each letter sound like? I realized that creating an entire phonetic system was much too big of a task and also not relevant to my project. Because it was going to be projected, the point was for it to be visually interesting and different from English, so it didn’t matter what it sounded like. Whenever I was asked about this, I explained that humans are incapable of producing the sounds of the language.

When I finished my alphabet, I downloaded the font and began typing out my questions and proverbs. The questions were meant to be thought-provoking, not cheesy, and start conversation among my audience. As I wrote them, I imagined an alien civilization that wished to communicate with other planets. What would they want to know? I thought about what their planet/culture might be like and how those features would become apparent through the questions they asked, such as space travel, dimension hopping, crystals, slime, and beasts. I wrote 26 in total.

To create words, I mostly just typed random letters until I came up with something visually appealing. For some words, like sun and moon, I used the symbols to create shapes that looked like what they described. I also needed to create words for concepts that don’t exist in English, like solid-bodied or soft-bodied or body swap. I recorded every word I used in my journal and created a dictionary for myself to refer back to. 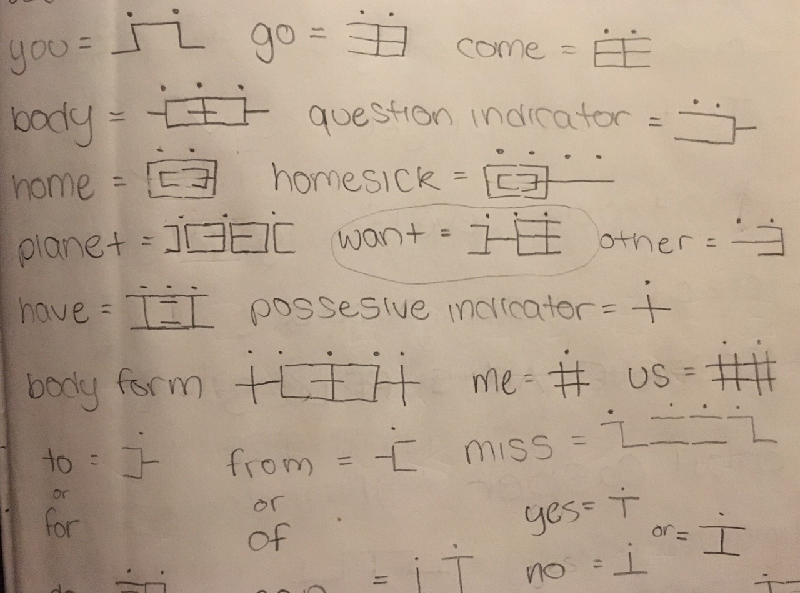 I also created a basic grammar system for my language. I did this by making up rules as I needed them, then sticking to them. To start, I decided that the basic sentence structure would be subject → object → verb. If the verb is is, it’s left out because it’s implied. For example, I like pizza becomes I pizza like, and I am a student becomes I student (am).

Here are some more of my grammar rules:

Following the grammar rules was a lot like putting together a puzzle. When translating English questions into my language, I would first rearrange the English sentence using alien grammar. Then, I could simply replace every English word with an alien one. I typed them out in a document like this: 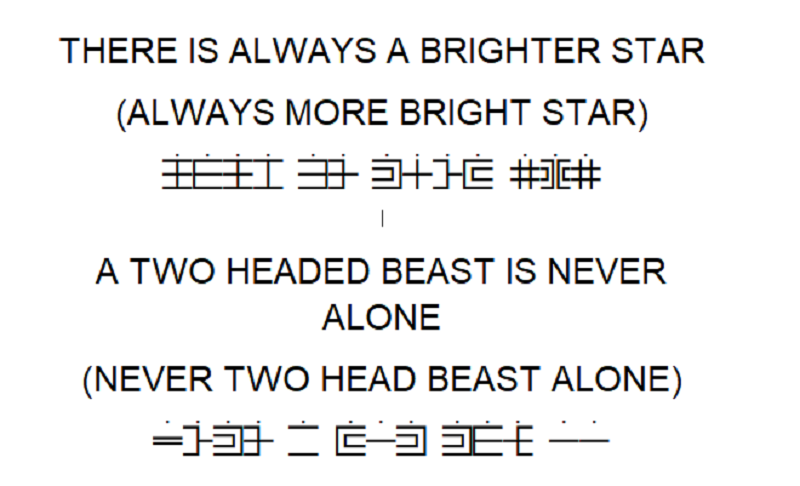 I then used Photoshop to make the slideshow I would project on the wall. Each slide consists of one question/proverb, with the English written above the alien language. I decided on a simple but declarative design, a black background with white text in all capital letters. This would allow the viewer to compare and contrast the features of the two languages easily. My inspiration for this was Jenny Holzer’s projections and truisms. 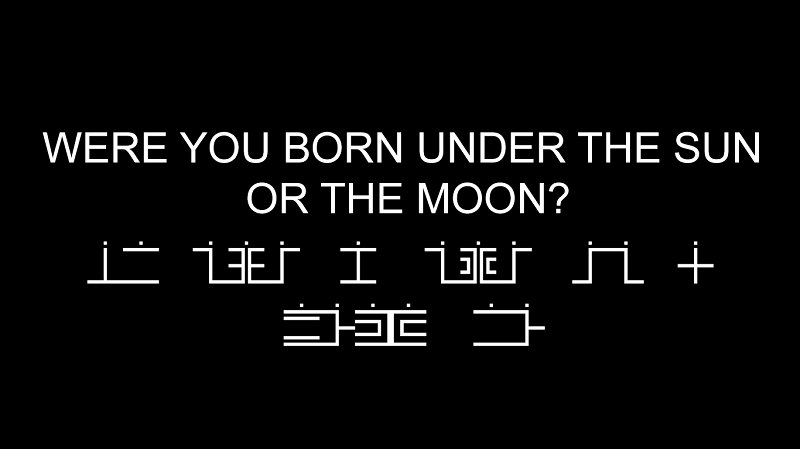 My two projectors were originally going to be set up on two walls facing each other, but because I was unable to build a rig for the projectors in time, I moved it at the last minute. Instead, the two projections were side by side in a different area. Ultimately, I was very pleased with how it looked in the new spot, probably more than I would have liked it in the original one.

On the night of the art party, some people only glanced briefly at the piece and then moved on. But those who realized what it was were really excited about it. I saw many people taking pictures with it and hanging out nearby. But nobody seemed to be talking about the questions. I would have liked for there to have been some kind of discussion going on. 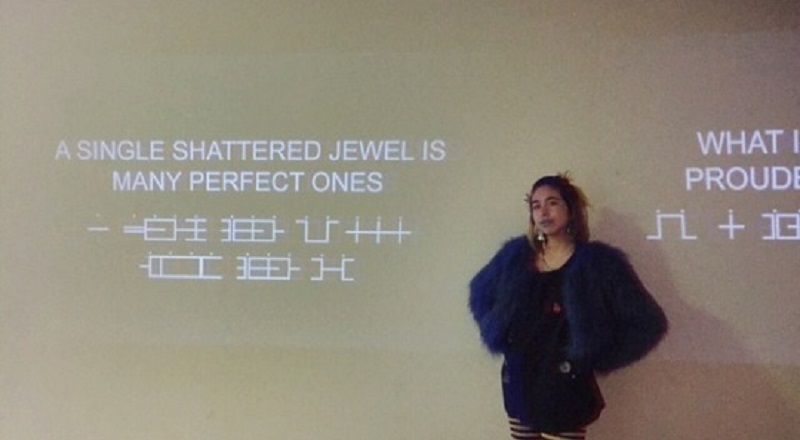 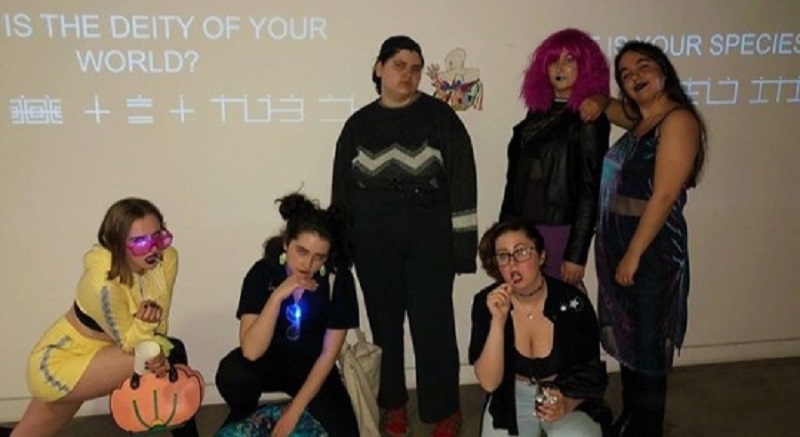 There are a few ways I could have better engaged with the audience. There could have been a performance aspect to the project; I could have stood by the installation the whole time and held a lesson in the language or assumed the character of an alien and told about the world I was from. I also could have created some sort of hand out, like a book of lore or a dictionary. It wasn’t really visible to my audience that I put in such an effort to create my own grammar and lexicon, so a hand out could have better conveyed that. I actually did create stickers, but I forgot to bring them to the party. My installation didn’t end up being as interactive as I wanted it to be this time, so next time I will keep these techniques in mind. But overall, it was a huge success, and I had so much fun with it. I think this project is the first of many constructed languages and projector installations to come.