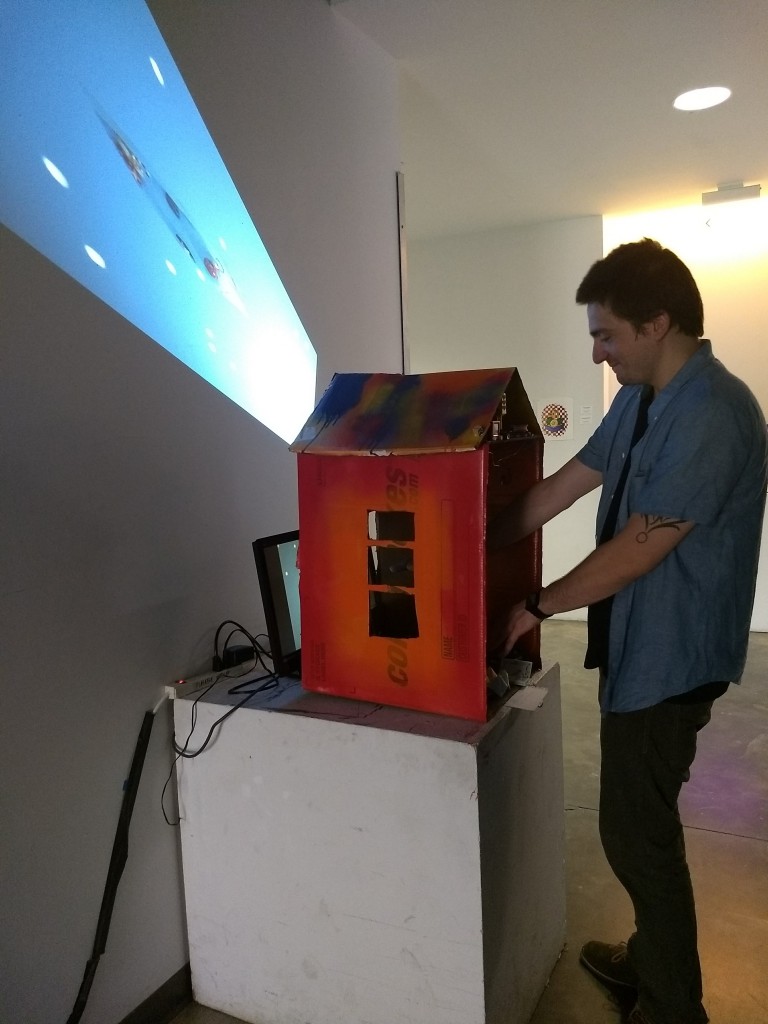 For my last project in Interactive Art, I ended up creating a house of nostalgia. The installation consisted of a cardboard box house, spray painted with a multitude of colors, filled with miscellanious toys and items from my childhood.

Behind the house was a framed monitor and Mac Mini, and to it connected a Leap motion sensor and projector. The Mac ran a program I created that began with a static blue background with moving white spheres. (This was intended to look cloud-like.) 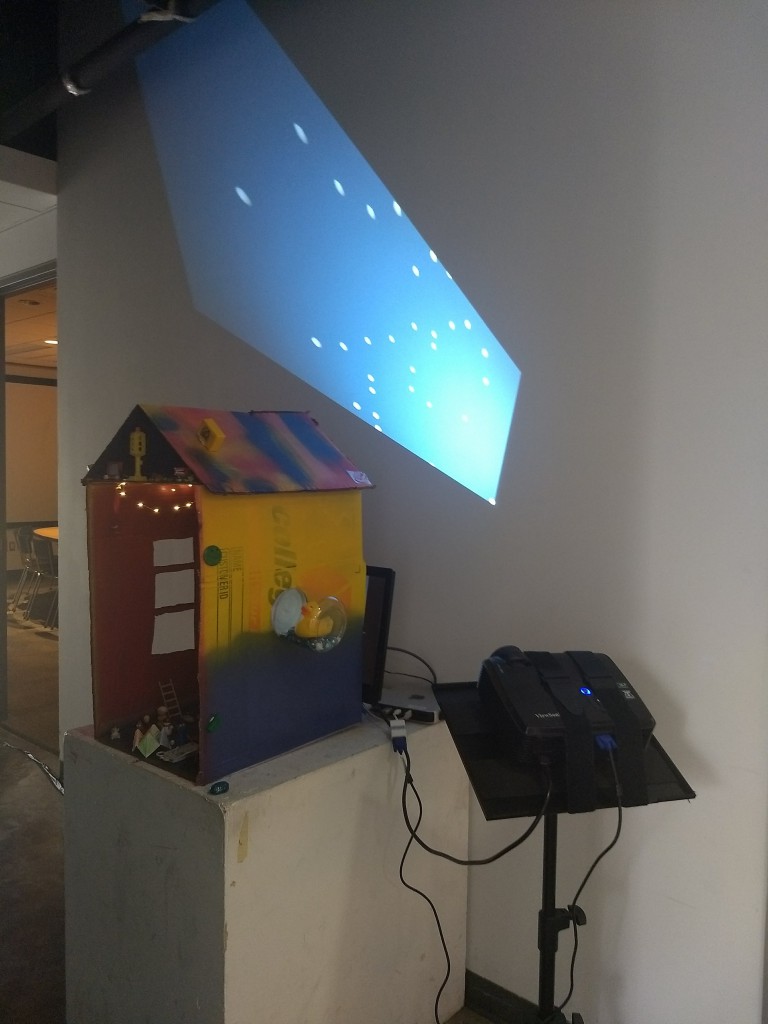 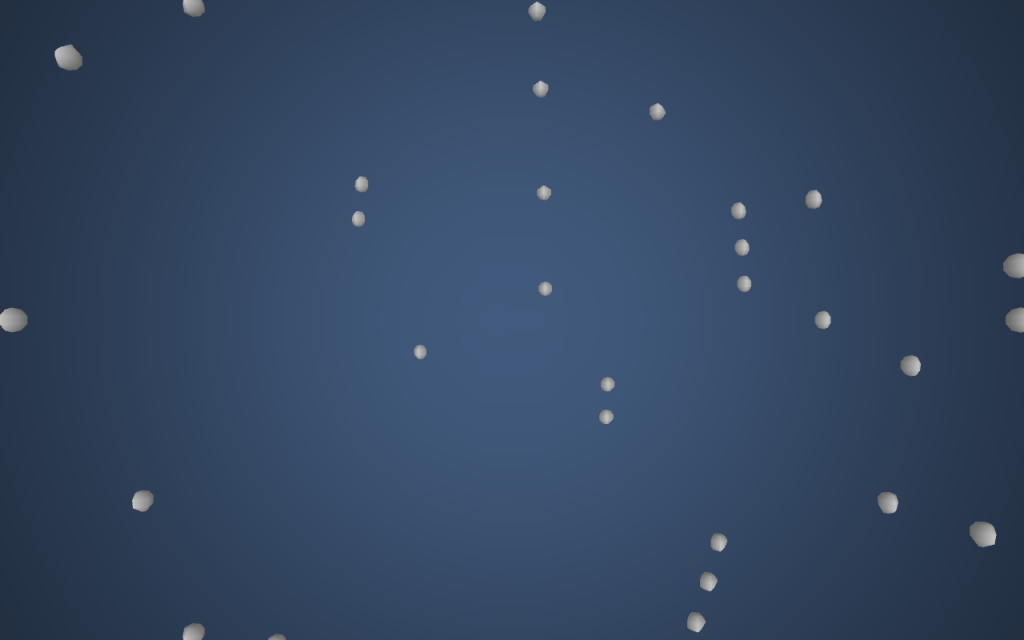 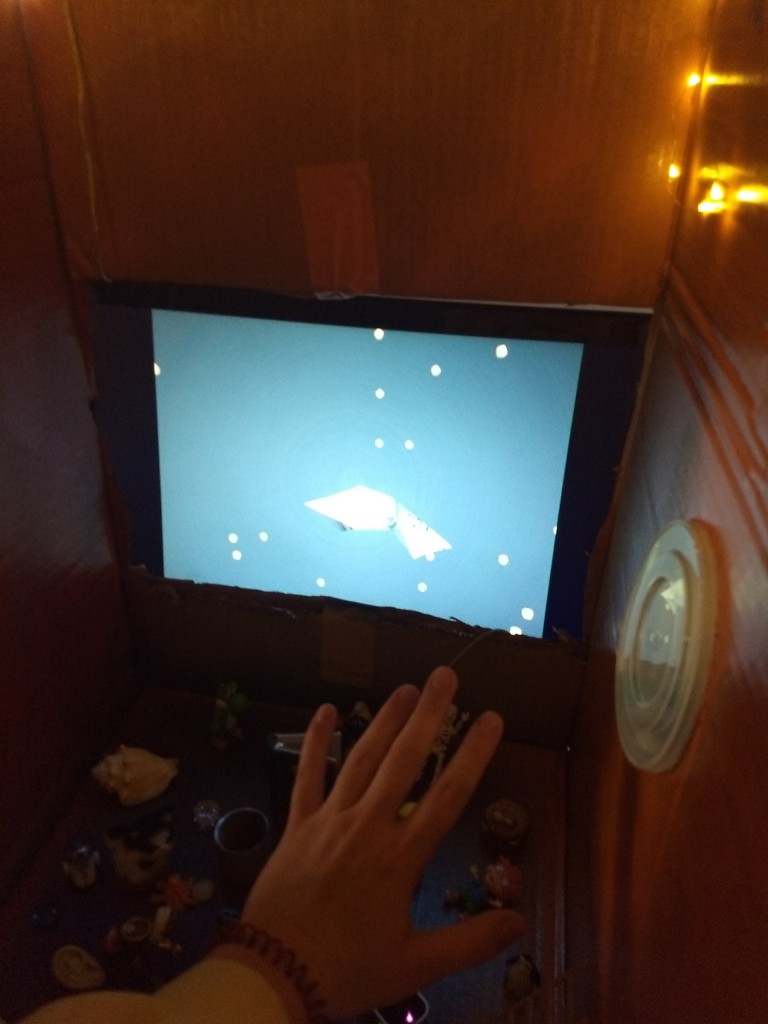 I purposefully attempted to match the color of the background to the blue sheet in the above picture so the distinction between “hand” and background became blurred, creating the “uncovering” illusion. I decided to project the screen as well because of the size of the box: when the user is interacting with it, the interaction stays confined to the box. To create the “magic circle” of viewers watching the interaction, I needed to make sure the screen could be easily seen outside of the box. 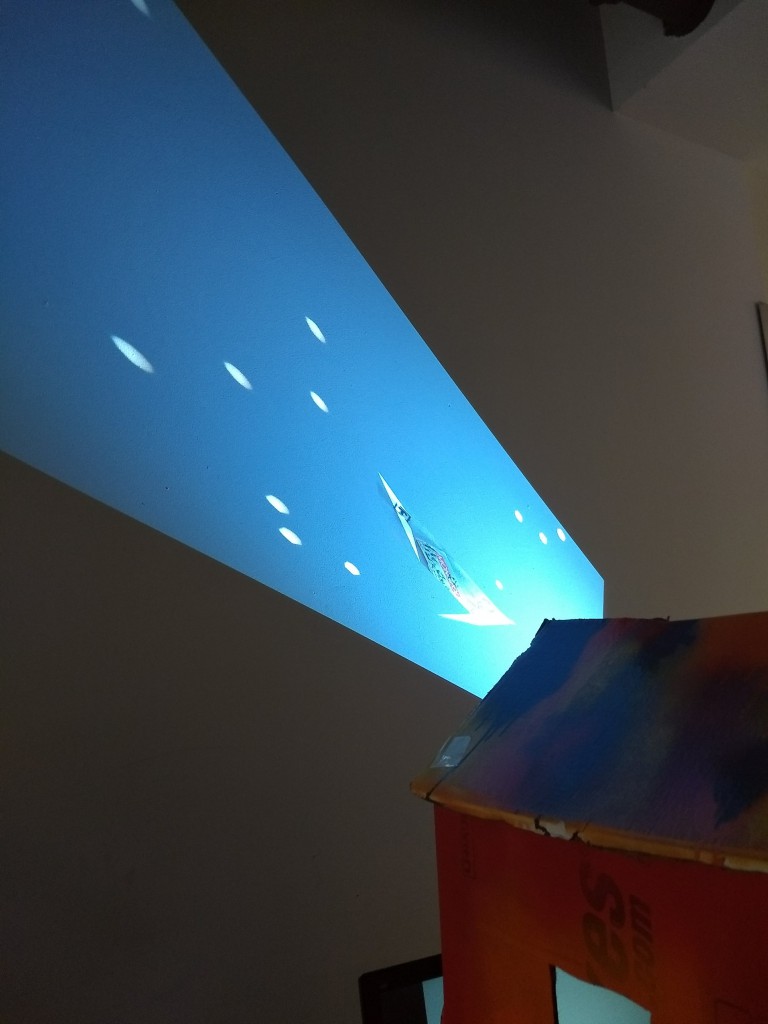 This project came to be through my Leap experimentation. While messing around with Angela’s code to create hand shapes, I found the concept of mapping and tried just mapping a basic 2D pattern I had created. When I saw how it instantly transformed the shape from something 3D resembling my hand to something 2D I was uncovering with my hand, my mind immediately went to Where’s Waldo. I knew I couldn’t actually use a Waldo image (as they are copyrighted), so I had to create something of my own. I wanted an image where the user was “discovering” something, not just looking at a pattern, so I thought about how to create this. I could draw something, but that would take more time. I decided to grab (also known as “have mom send”) some random objects from my childhood and take a photo of them. I chose childhood objects because I felt they were the most various, stand-out objects I had, and I was also determined to use Fischer-Price Little People in my next project. (I suppose I was feeling nostalgia at the beginning of this project, hence why it turned out to be a nostalgic theme.) 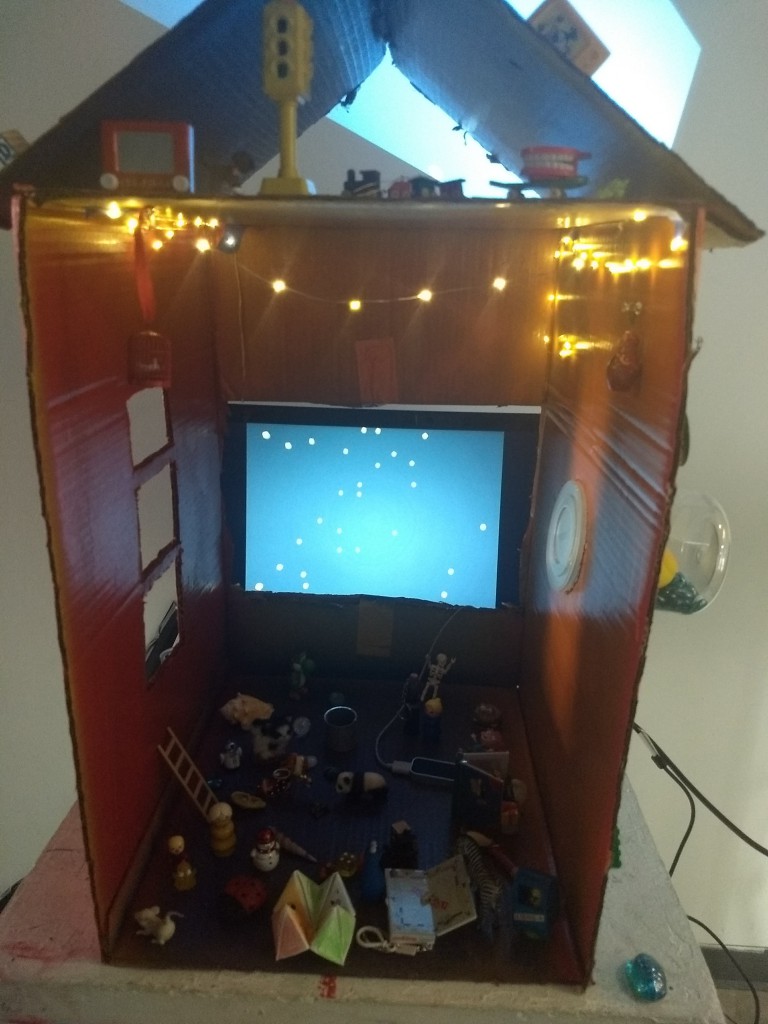 My program came together rather quickly; it was not a complex one. What I came to struggle more with was the cardboard box. Angela offered the suggestion of putting my program within a box to create a mystical feeling, but to transform the box so it didn’t feel like cardboard. The way I could visualize that mentally was to make a house shape. My first house was fine until I had to frame the monitor behind it. I didn’t think through where I was cutting and ended up cutting the entire back flaps out, where all the structure of the house was resting. It lasted through one crit, but alas did not make it through the following night. This forced me to completely remake the house from scratch. Upon the second attempt, I was more careful with where I cut and thus had a more secure house.

I decided to put the objects I pictured physically in the house after a suggestion from a classmate. I thought it might help clear up what the user is doing/what they are searching for. I don’t know if it quite achieved this effect, but added more to the showmanship/aesthetic of my presentation and helped draw people in.

Because the cord was short, my Leap ended up being quite far inside the house. I thought this would be a problem, as people would not know what to do. However, I think it was one of the best aspects of my installation: as people reached in to look or touch objects (which I encouraged by a sign), they would suddenly activate the Leap and realize they control the picture on the screen.

On installation day, I realized my program did not work as well in the space as it had on my computer. The Leap sensor would stop sensing objects only about halfway up the screen, reducing the amount of objects the user could actually see and access with their hand shape. This was a bug I could not fix before Open Studio, and I wish I had but I don’t think it affected the interaction for the user. I learned setting up in the space beforehand is extremely important and, as with the Art Party, there are always new issues that arise within the actual space.

One aspect that I wished would have worked better was the clues I had prepared for the user. I still wasn’t sure if the user would know what to do with the exhibit, so I created I Spy-esque clues for the image. Angela suggested they be presented in a kid-type fashion to fit in with the atmosphere of the installation, so I chose to create a paper fortune teller as that was something I remember being prevalent in my childhood (pictured above, bottom center). I attempted to put it in the front, but I feel it blended in with the other objects. I am not sure if anyone read them, as I was unable to attend the first hour of Open Studio, but the people I showed the installation to did not notice it. I think if I had made the clues more visible, it would have drawn people in more as they would feel like they had a task to complete. Instead of a goal-oriented “game” type installation, it became an interactive art piece about presentation and atmosphere. 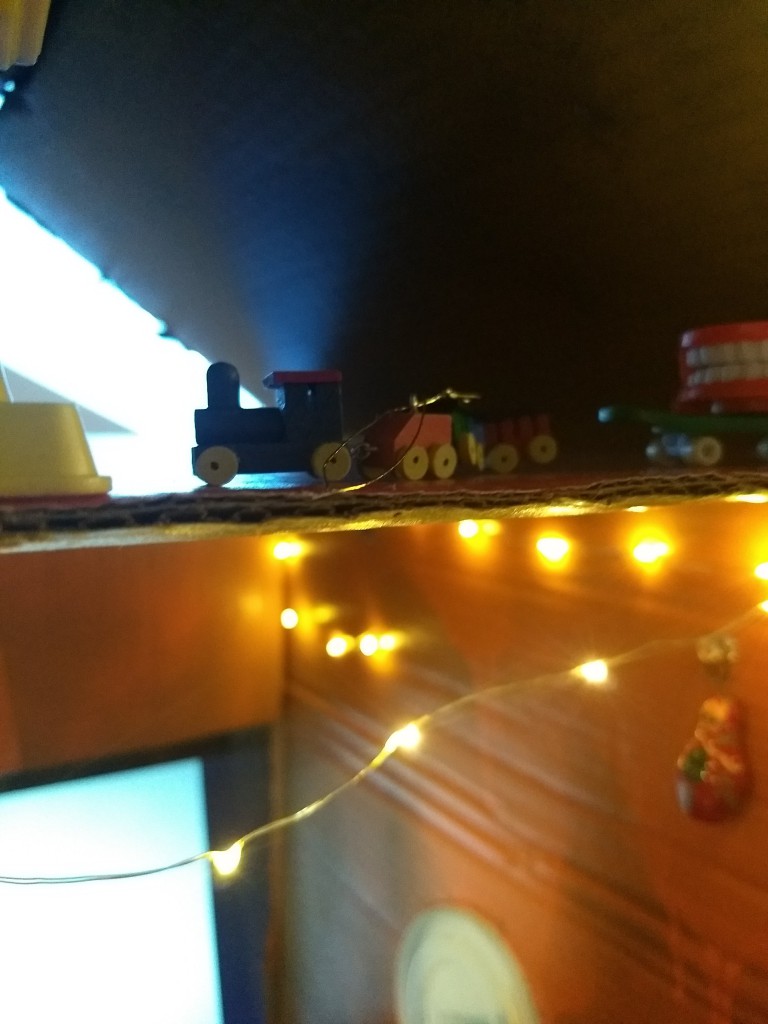 Overall, I think the installation was a success in terms of user interaction and how the user felt about it, but I think I was not as successful in specifying the action I wanted the user to take.