I felt that while combining artists ideas to create my own is how art is created. This was my first time taking art seriously and was such an amazing door to open. My inspiration came from Henri Matisse (French, Le Cateau-Cambrésis 1869–1954 Nice). I used Hertleins generative art idea and Monlars multi step system to create the fish that I did. While creating I use a a function called bezier, it uses two set of base point and two sets of pulling point. Using the bezier curve was especially difficult but also the most grifting part of the code. I did not understand it until I took out a piece of graphing paper and  graphed out how it makes its shape. This is how I made the curves, and then a simple line function and ellipse functions for the rest of the strokes. As I progressed in my piece I added in a sound wave to create and added noise to the background to have it gradually progress. I added randomness to the noise wave to give it the ripple effect and the gradient in the background is constantly overlaps the waves to give it a depth and make the waves disappear after a certain amount of frames. For the next fish it was simply adding a fill to the noise wave to create a fish like moving effect. I used randomness with the bezier() and line() functions to create a moving effect. Only this frameRate() was too slow so for the final fish I stopped the movement and added in a bubble object. A bounce function could have been added but I also found satisfaction in have the background be active against static form. In the second fish I moved it to its own class to make the code easier to read.

I started off with Monlar’s step by step heuristic where she takes a simple, symmetrical code, and randomizes something each step until she was content with the outcome. When we studied Monlar we learned that she used computers much slower and smaller than ours and yet she was still able to create her artwork one step at a time. I attempted to channel her progressive steps with my fish. I feel I most resembled Monlar in my third piece because I randomized all of the functions on the fish to give it the appearance that it was moving. I was also inspired by Bret Victor’s “Stop Drawing Dead Fish” video.  In the video he explains that when we draw fish we are not really drawing what a fish looks like , we are drawing was a dead fish looks like. This is dear is based off of applying code to animation to make it move as naturally as possible. This was not quite achieved by just randomizing the length the but inspiration of that effect was there.

I also used Herlein’s germinative art heuristic multiple times in my codes. To start Grace Hertein is known for her natural elements in her works. Although she is only known for making still lives my fish matches other aspects of her heuristic. The fish itself looks as though it could have been hand drawn by a pencil. The fish isn’t really something that Hertlein would create but it follows the natural idea. When I incorporate the noise wave to the top of the code, it really resembles something Hertlein could have made or thought of. I used a thin stroke (0.5) to create the multilayer effect depth.

Finally, I wanted to use a color I see a lot in Matisse’s other works, He has multiple paintings of fish in water and in ponds, I chose the black and white stretch because I liked the simplicity to It compared to some of his other more chaotic paintings. In most of Matisse’s work there is little to signify depth, he has a very flat canvas. The piece I chose has no depth to it and reminded me a bit of Paul Klee. If I could should how to present these I would not have put them in order, I would have created a grid with them and presented them all at the same time. I only thought of this after they were completed. As much as I enjoy seeing the gradual growth of the piece I also find beauty in the simplicity of the fist fist. If I were to have continued with this code, I would have added a bounce and a would have added more depth to it by using pushMatrix() and popMatrix() to translate and delicate there same fish into difference sized. To conclude, I used the skills in class I had learned and applied it to my fish. It might not be an that is alive  to some but I would hope it not to be interpreted as “dead”. 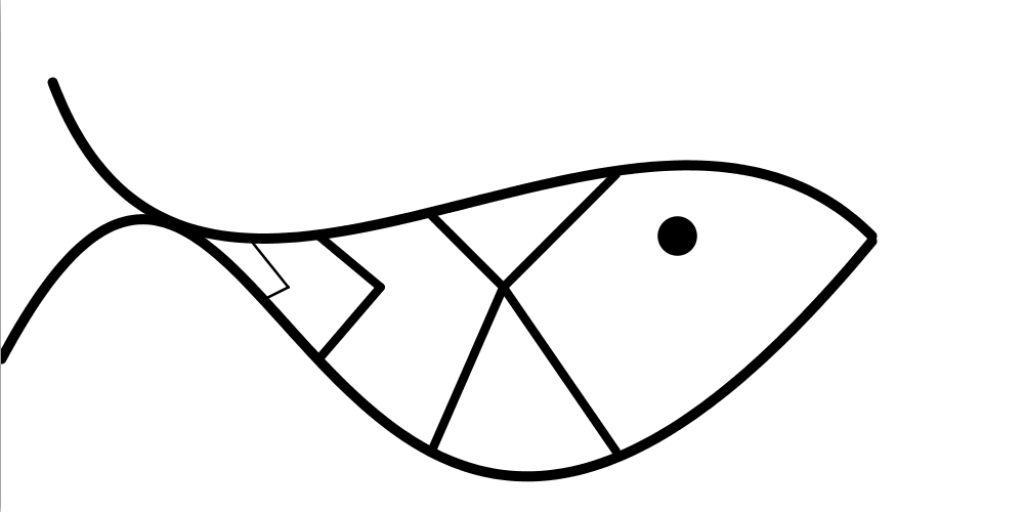 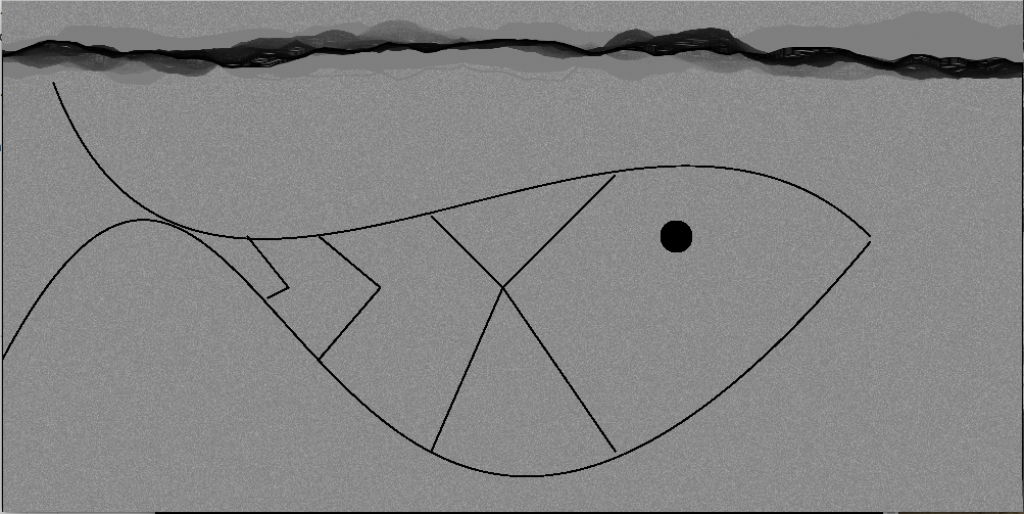 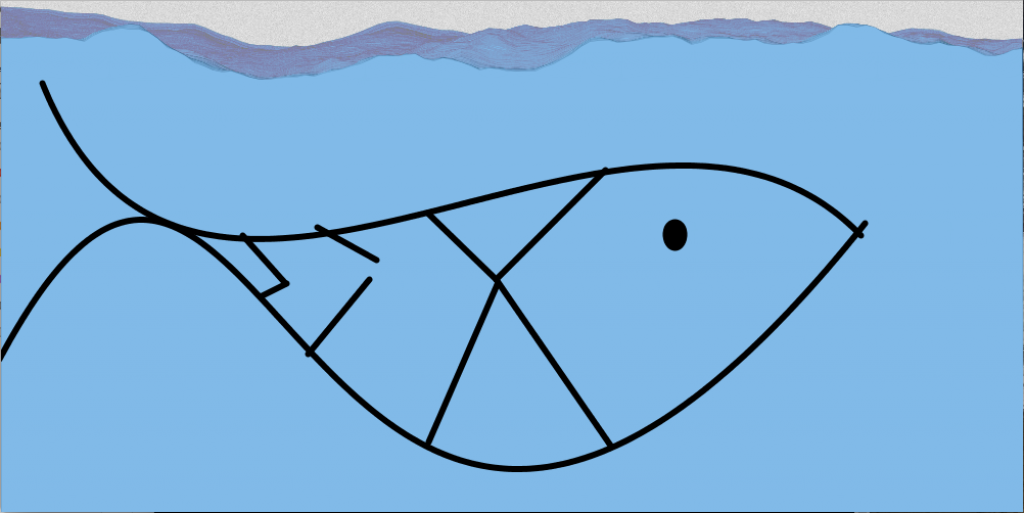 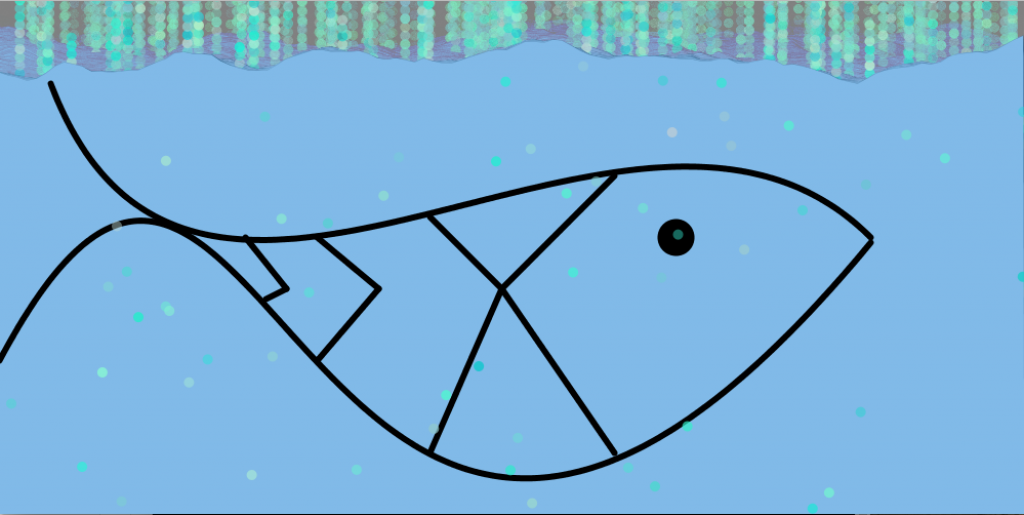