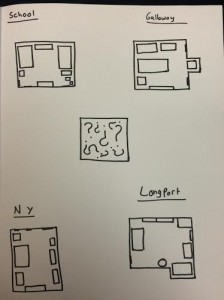 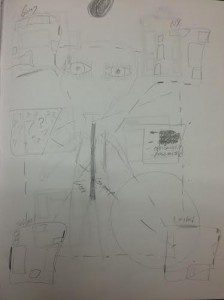 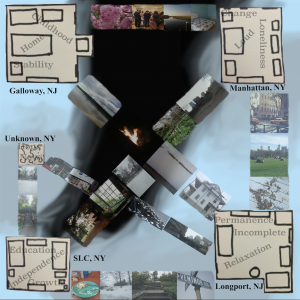 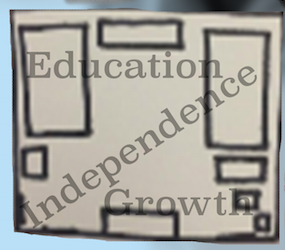 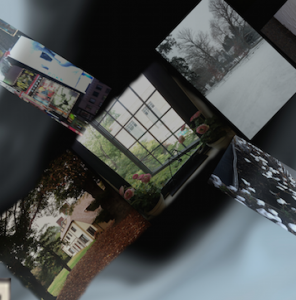 In this second draft of my self-portrait, I wanted to continue with the idea that the two places I have lived (New York and New Jersey) have had different (but equal) influences on me. However, with the help of crit and conference, I realized that my first map was more of a collage of the different aesthetics of these two locations, rather than a map of these place’s influences.

In order to make this draft of my self-portrait a map rather than a collage, I added rough, hand-drawn sketches of my bedrooms in each location to represent a sign system. There are multiple locations (and therefore multiple bedrooms) because of the amount of times I have moved within both states. The size of each sketch is relative to the amount of time lived there (which happens to coincide with the amount of influence the place has had on me). “UNKNOWN, NY” is a glimpse toward the future, as I know I am going to be moving apartments within New York City in the next few months. This unknown location is already slightly affecting some of my life choices, therefore influencing me in the present, despite the uncertainness of the place. The text within each room are words that represent my feelings towards that place and how they have affacted me.

The connective system shows which places are related in the terms of “moving house”. In the period of the last six years, “home” has been multiple locations at once, and the lines of pictures that cross between the rooms represent which houses I moved directly to and from. The pictures that make up these lines are representations of each place, what I think of when I think of each individual location.

The background of the map is how one is intended to differentiate between positive experiences of moving and negative experiences of moving. The darker the background gets, the more sad or traumatic the loss of a home/house was. For example, the move between Galloway, NJ and Manhattan, NY was a time of sadness due to the relocation to a new place from a childhood home.

Ideas that were discussed in the class readings, such as the fact that maps give us a type of reality that allows for a deeper understanding of specific individualistic ideals deeply influenced my own self-portrait. The idea that maps give us a sense of identity is an important aspect that I wanted to portray, especially because of the quote “mapped images have become essential to our sense of the world, to our place within it, to much of our identity” and “even our sense of coming from a particular place. . . to our sense of who we are, of what we’re doing, of where we’re going”. The aspect of a place’s importance in relation to an individual is something I wanted to show accurately. This self-portrait is a map because it proposes the idea that the relation between various locations are negative or positive/neutral in a personal sense. The map discards geography and time in order to make a statement about the influence of movement from one place to another. Through the display of specific rooms the represent different towns, and color-coded connective lines, the map makes the journey of movement between various places within NY and NJ (through my feelings toward these experiences) visible.

Artist References: Monica De Miranda-In the back of our hands and  Jeannie Thib- Georaphia. In addition, the class guest speaker provided inspiration for the idea of mapping out rooms in houses: 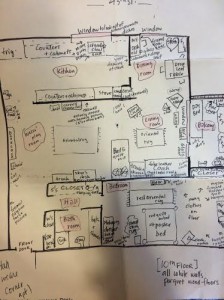