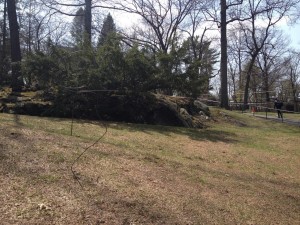 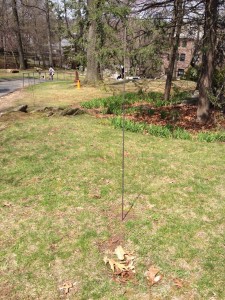 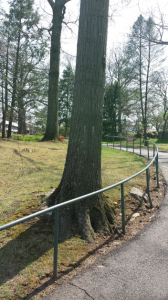 For our space, we chose make our sculpture more interactive by focusing on the vibe of the stalker rather than a specific, targeted act of stalking itself. Instead of designing a sculpture to be fixed on observing a particular place (i.e. always looking into one window), we wanted to make our sculpture semi-hidden and to stalk people passing by on Bates Hill. Some sculptures will go unnoticed until you just pass them — only for them to be out of sight when one tries to investigate. Going about this at several points down the hill replicates the creepy, omnipresent feeling of the stalker. 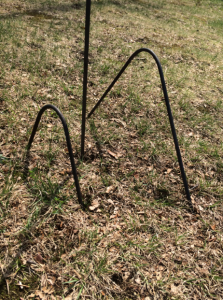 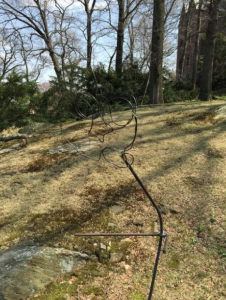 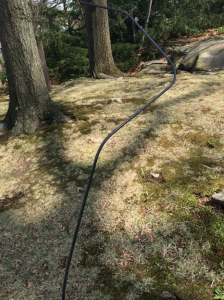 We are attempting to use our figure to impose a creeping sense that the site is stalking those who interact with it. Since people most frequently walk down Bates hill, and our repeating, wide-eyed figure slowly becomes more defined as they move that way, it is our intention that people will perceive our figure as appearing with the intention of observing them. Transversely, by recognizing this sudden unexpected presence and observing it, we think that people will themselves become stalkers (i.e. observers with intention).

We are using the natural topography of the site to help display our figures in a way that draws the audience’s eye to these installations. As people walk down (or up) the hill, the natural slope of the site (along with the various trees, rocks, and bushes) provide various ways to help partially conceal our figures, forcing the audience to have a more “searching” eye and adding a slight air of mystery.

Our piece is  an example of psychogeography in the way that it promotes a new sense of consciousness and awareness about the space. By placing our sculpture, we have transformed our space into one that invites exploration from any pedestrian that interacts with it. To someone who regularly traverses Bates hill, there is something new there, and not only is it curious, it’s watching you. It is our hope that by transforming our space using the notions of psychogeography (specifically the stalker), we have turned people’s awareness into their environment in a way that makes them psychogeographers, or stalkers, themselves.

We were definitely inspired by the stalkers we read about. We used the reading to form a general idea about the ethos of the stalker. From the reading, we took the ideas that the stalker is attached to the moment, is personally involved in the observation. They are intense, zoomed in on particular things, and gain their freedom by taking others.  Their journeys are made with intent, and they are somewhat manic and uncontrolled. We think we have put these elements into our sculptures.

Our site makes visible these notions of psychogeography.

We were influenced by the artists  Picasso and Susan Graham.