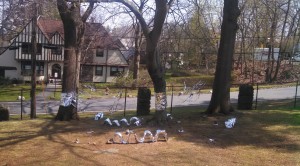 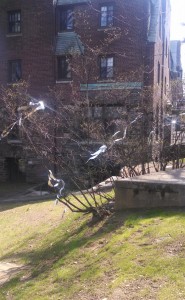 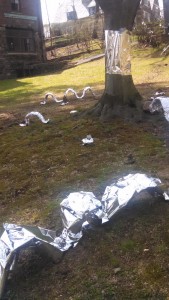 Our group visualized our identity as the Flaneur in several ways. First, we wanted our work to embody the wandering qualities of the Flaneur by creating different visual attractions to guide the eye in a wandering fashion around the landscape. Second, we chose to use a reflective material so that the viewer would be both an observer of the landscape, as well as being able to see themselves reflected in, and a part of, the landscape. This was inspired by the Flaneur being both a part of the city as the navigate it, and an observer. 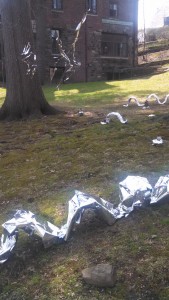 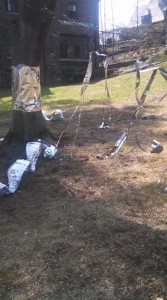 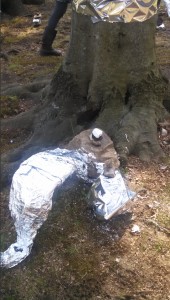 Our work is an example of psychogeography because it is intended to alter the viewer’s perception of the landscape. To begin with our site is one that is often overlooked, making the mylar a drastic change to the landscape. The piece both works with, and contrasts with, the landscape by contrasting natural and unnatural materials and shapes. The bizarre and shiny nature of the landscape now entirely changes the way it is perceived and interacted with. Passersby stop to stare at what was once overlooked.

We were influenced by the idea that “our own journey [through the landscape] is entirely imaginary” and used this idea to try to create a landscape which would inspire the imagnings of the viewer (Coverley, 70). We also chose to tackle the Flaneur’s task of “reconciling the contradictory roles of everyday reality and unconscious desire” (Coverley, 73). The exsiting landscape represents our everyday reality and the abstract and brightly reflective shapes reflect unconscious desire.

The artist that we were most inspired by was Andy Goldsworthy. His work is very site specific and encorporates materials found at the site. In our interpretation, we use the elements of the landscape such as rocks and trees, yet we chose to add and alter elements of the landscape in order to create disonnance between the viewer’s expectations and their visual experience.