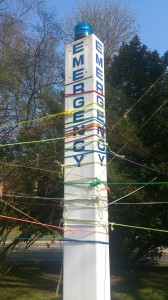 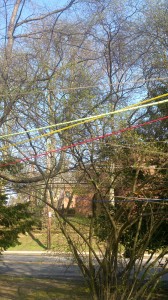 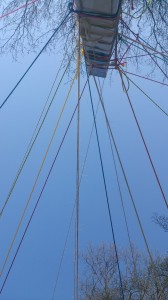 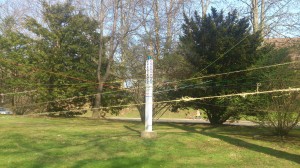 We have visualised the methods of our ‘identity’ in three ways: firstly we drew attention to the most surreal thing in the space – the emergency pole; secondly we used the nature of a line to break up depth, distance and direction so that perception of the space would be distorted and dream like (the tension, connection and colour of the strings all contribute to this); thirdly, the web like pattern that emerged is evocative of the fractal yet narrative nature of dreams.

Our work is an example of Psychogeography in that it is a response to the nature of a space which would change the way the site was mapped. It also forces people who enter the space to interact with it in a different way. The strings prevent straightforward passage, and actively encourage diversions, disorientation and unconscious responses unique to the individual.

One of the most interesting things the work does to the space is to distort depth perception. The mind unconsciously associates the lines of electricity cables across the roads with the lines of string and cord in the installation and given that this happens from many angles it does make the are a small bubble of distortion – in some ways a world of its own.

This effect is enhanced by the fact that one cannot see the installation when one approaches from main campus, so that coming upon it suddenly through the trees is quite a surprise. The strings also draw attention to verticals generally not noticed by people who mainly use the sight as a thoroughfare.

The emphasis on allowing unconscious impulses to translate into actions in the discussion of surrealist psychogeography from Coverly was particularly influential, especially given the ‘on the fly’ nature of construction and planning.

We should perhaps have liked to refine it a little more, play with more verticals and perhaps mimic the strangeness presence of the emergency pole more directly but on the whole we are satisfied, and we had fun.