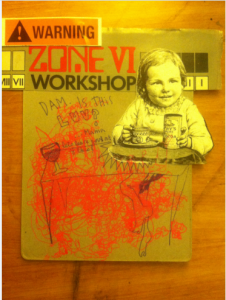 For my conference project I have decided to map the invisible topography of film through an automatic drawing process. The photo I inserted is from a collage and drawing I did when watching The Cook, The Thief, His Wife, and Her Lover directed by Peter Greenaway. As I watched the filmed I continuously drew the outlines of significant shapes and figures within the composition of each scene without looking at the paper. I wanted to create a direct link from my consumption of these shapes visually to my representation of them physically without re-imagining them at all. When I finished this piece and looked it over I began to think of it in terms of mapping the invisible. I realized that this process could be viewed as a way to map the intangible topographies of a film while simultaneously mapping my visual processing of these topographies.

For my conference project I would like to repeat this process, in a more refined way, for five (or more if I have time) different films. I will specifically choose films with contrasting aesthetic sensibilities in order to see if this effects the quality of line, or general affect of the finished ‘psycho-topographical’ map that I create. It will be interesting to see if there is differentiation within the set of drawings depending on the film.

As well as playing with the idea of immateriality in film and positing an interesting way to make a process driven map I think that this series will be aesthetically engaging and cohesive (which is very important to me as an artist!)

My process was largely influenced by many of the concepts that fuel surrealist practice, and in terms of psychogeography the surrealist derive. Automatism is of course very important to the surrealist process and I think that this system of mapping can serve to subvert accepted modes of navigating perceived space in film similar to the way derives subvert conceptions of how to navigate urban space.