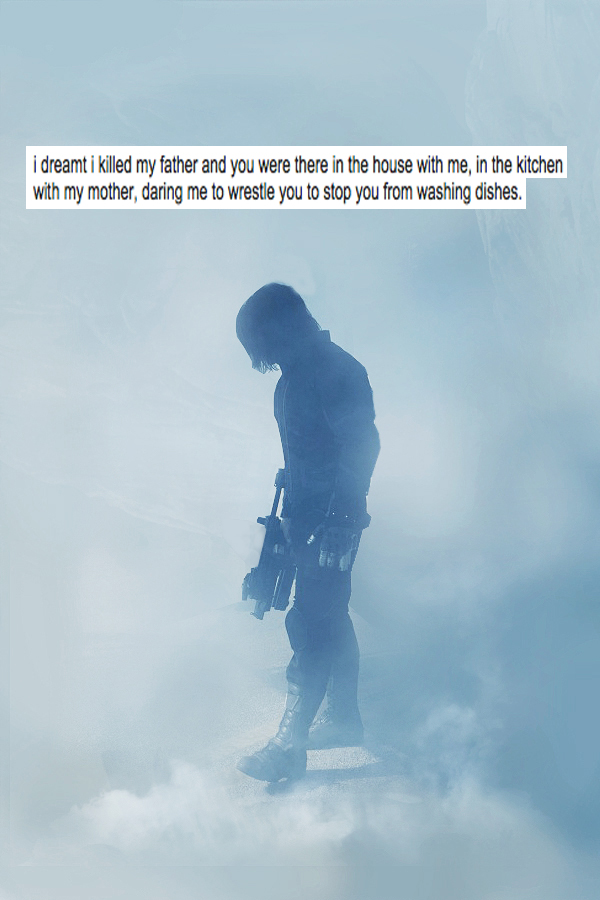 I was a big fanboi when I was much younger with regards to gay male fanfiction specifically, and had recently got back into it because of a reconsideration of the dynamics involved in tumblr slashfic/”shipping” culture, as well as because my boyfriend was into it. When I read Laura Mulvey last year, I wrote a little about the implications of the community’s gender dynamics: a population of mostly young women imagine a fantasist homosexual life for their favorite characters, which saves these characters from the poisonousness of their stoic masculinity, heterosexuality, and violence, or at least helps them accept the nature of these issues. These women use the techniques of screenshotting, making gifs, fanart, and fan writing to feminize the characters by detaching them from the narratives of their stories and objectifying them. They also uphold and liberate their masculinities in their sexuality; often these characters are not even presented as gay-identified, simply desiring of each other.

I identified with the commonly accepted ideas around Captain America (Steve Rogers) and the Winter Soldier/Bucky Barnes. I identified with the narrative presented of two men who had been through huge psychological and physical changes in their lives, but still managed to find their way back together. Rogers is born a sickly and thin boy in the late 1920s, takes an experimental serum that makes him grow into a super-soldier, becomes an overnight sensation and an unstoppable weapon, and is eventually cryogenically frozen during a heroic suicide, only to be thawed out in the 21st century. His childhood best friend Barnes dies while serving during WWII in Rogers’s unit, only to be frozen himself and come back brainwashed as a Soviet super-assassin assigned to kill Rogers. After some mutual beatdowns, Rogers breaks him out of his conditioning and the two reunite, nearly 100 years after their original lives began. As told by fans, it is a classic masculine gay story about two muscular and sad men, who, having known each other and been best friends growing up, are usually presented as soulmates. Regardless of their canon sexualities, their story is both emotionally and physically deep.

For me, Rogers’s growth to physical masculinity through chemicals paralleled my transsexualism, and Barnes’s sadness and identity confusion paralleled my depression and dysphoria. These men, in their imagined relationship, had something admirable and resonant to me that I could seek to emulate: a love that was about friendship and care, but that also acknowledged the reality of trauma, identity splits, and hurting one another. As I started a new relationship with someone who had simular experiences of trauma and transness to me, I sought this love as an ideal. I wanted to be good, understanding, and giving in a way that I had only seen in tandem with masculinity and violence in the context of fanfiction.

My partner also introduced me to the 70s cop drama Starsky and Hutch. The relatiomship between the eponymous leads of the show contains dynamics simular to that of Barnes and Rogers, in that there was a blond and a brunette, who were both about muscles and masculinity, but also constantly struggling to take care of each other in an unforgiving and violent world. Violence on the show allows for homoeroticism and femininity in the context of the two comforting each other.

It was these elements (my identification with the different men and their journeys, my belief in the gendered power of fan imagination, and my desire to be good for my partner in the queer way that these men were good for each other) that came together into my conference project.

Through collage poetry layered over fanart and screenshots, some of them lightly edited, I explore the ways in which my mind layered these different elements. I “mapped” the path of my mind through these love stories, emphasizing my own, in the spaces of the internet, time, fantasy, trauma, and reality. I used text from my own writing, as well as relevant passages from fanfiction and academic writing. I set the project into a timeline from an online template in order to get my desired narrative flow and to emphasize time as a setting.

The project maps the invisible ways in which media portrayals of relationships affect our thinking, especially about our real-life romances. I was seeking to shed light on how, instead of learning from romance movies or pornography, a marginalized subject such as myself must seek out other models for romantic ideals. I journey through a collective fantasy media, its existence itself a mapping of ruptures in heterosexual masculinity, to learn a queer utopian ethics that is unique to my own romantic project.

Lastly, I wanted the form itself to feed back into the larger fan project of mapping the invisible and communal world of fantasy, especially female and trans fantasy. I wanted a fan to be able to read it and like it.