There is a village: 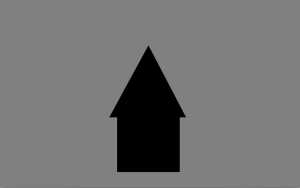 The monster comes out at night: 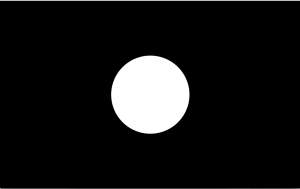 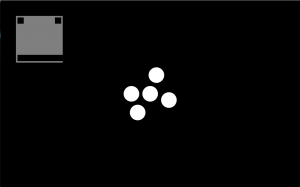 This ‘game’ is really a few-second long cutscene, because despite numerous attempts, I was never completely able to get gameplay working with the cutscene, and I liked the story the cutscene told way too much to end up scraping it. I created a representation of the village with a single home, which I created by placing a triangle on top of a square. I deliberately made the roof a little asymmetrical in order to try to give the village a bit of a Nightmare Before Christmas/German Expressionism-y vibe. The sun “sets” by slowly taking the background from bright white to black, at which point a moon appears to represent nightfall. The moon then breaks into pieces in order to represent ‘moon children.’ The monster is a block-y creature, in order to visually distinguish it from the rotund moon children, plus I kind of like the 8-bit vibe that it lends to the game. Finally, I represented fire-breathing by making the square that creates the monster’s mouth toggle back and forth between black and white several times in quick succession.