While sketching in my book, I stumbled upon an idea for a conference project that I immediately fell in love with: I would make a game about a lady bug that gets its spots. Aside from that, I had absolutely no notion of what the game would be like. My initial thought was to have the lady bug crawl up a flower (the bud would be the end point), while avoiding bees and picking up black spots that would fly through the air. You can see this idea in the sketch I drew here: 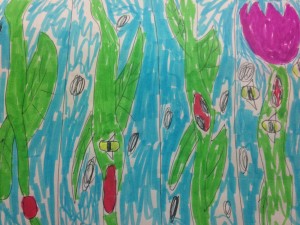 However, I soon realized that trying to code such a game in a few weeks might actually do me in. I then settled upon a more reasonable idea that would allow me to combine ideas from the two group games I have worked on. The spots would still scroll around the screen, and they would still show up on the ladybug as it touches them (echoing the circle-appearing aspects of BubbleTower). However, the bee will follow the ladybug and kill it if it touches it — adding a hider-seeker aspect to this game. The new concept is shown below: 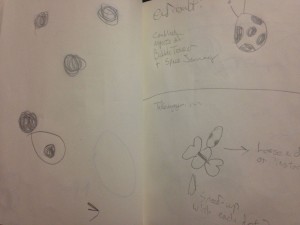 It was around this time that I came up with the name for my project: Bug Spotter! (Because…ladybug…spots…yeah….)