Rescue in its current form is an attempt to subvert the common RPG adventure trope of a hero rescuing a princess, but has been through numerous iterations and pivots such that numerous aspects of previous versions of the game appear in this most recent version. This history is long, complicated, and largely irrelevant, contributing to arbitrary aspects of the project. As it stands, the game is about a mother attempting to rescue her daughter, failing, and needing to be rescued by the supposedly helpless little girl. 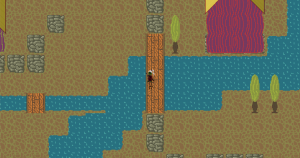 The inspiration came very soon after finishing LISA: The Painful in early February. My initial need was to create a game about a parent willing to do anything to save their child. This led to the character design of Isha, a middle-aged war veteran who is the mother of a small girl named Gemma. While initial aspects of the game revolved around the conflict between the Verda (Isha’s species of green skinned people) and humanity, I eventually dropped this idea in favor of trying to work off the medium of adventure games like Zelda and Mario, as it lay more within my areas of expertise. Because of this however, aspects of the previous world such as the Verda and Human conflict remain as backdrop and partial catalyst of the game’s events.

The way I wanted to challenge the hero rescue damsel in distress narrative was to have the natural hero (Warrior character) be rescued by the small child. Since Isha was the main character of my previous idea, I made her the typical warrior character by virtue of that being what she was before. The idea was that the player would become comfortable playing as Isha and slide into the usual rhythms of an action RPG. However, once the actual quest began, Isha would be captured and the player would begin controlling the imprisoned Gemma. From there, the player would discover that Gemma had reality altering powers, able to tear holes in existence, and would go on to save her mother. 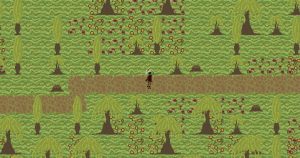 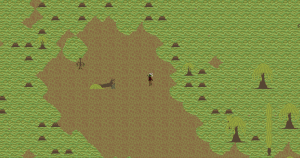 This section in particular during the paper test revealed several problems in the design I had laid out. Foremost was that when control of the characters changed from Isha to Gemma, it was not clear that that was simply meant to happen as an established event, not a mechanic that the player was in control of. Because of this, the player believed that the point was to return to a more powerful body, since Gemma seemed helpless and died anytime she came into contact with guards. This revealed both that the player felt mor e kinship to Isha (partially expected given the structure and my intentions) and that the player did not realize Gemma had any powers aside from running. Much of this was a symptom of oversights on my part that did not adequately inform the player of their abilities.

What was positively revealed was the idea that the player wanted to chase Gemma, who in the beginning flees from the player, reinforcing the idea of following/rescuing the “princess.” However, I’m not sure that this adequately illustrated the relationship I wanted to express. State of the game was also fairly positive, but again showed mistakes made in character design (misunderstanding the age of Isha) and the pallet of objects blurring together at times.

The art otherwise has been part of the easiest of this process for me, which I found exceptionally surprising as I have no real art education. While I’ve drawn for fun before, I’ve always found the details that I mess up too marring for me to really care what I’ve create. The abstraction of pixel art however, has made me feel exceptionally good about the kind of work I can produce. I feel this is well represented in the game.

Aesthetically I wanted to go for darker, earthy tones, because the original idea was to try and make the Verda seem folksy, and slightly other, but in a natural way. I also then wanted to draw attention to certain characters by using slight deviations in these colors. One of my original Verda designs thus had bright purple eyes, at odds with the dark green of his skin. I also wanted this earthiness to contrast with the humans, who I planned to put in lots of pristine, white, clothing, evocative of the Roman Republic. 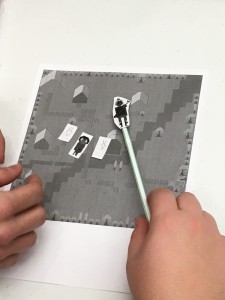 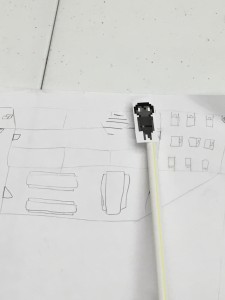 Development up until state of the game felt very smooth, exciting, and pointed towards a specific goal. Since then, because of revisions, expansions, and downscaling, I feel that things have slowed somewhat to a near stall as I try and figure out connections between the things I had already decided I wanted in the game, while maintaining the structure I had envisioned.

The path forward is a continuing distillation of what I’m trying to express, while retaining the impact fulness I want to create. In terms of art, I have a number of assets and environments left to build, as well as more animations for the characters and the world.