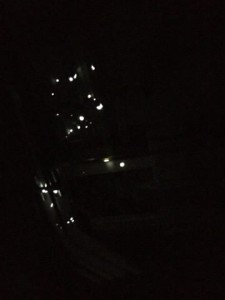 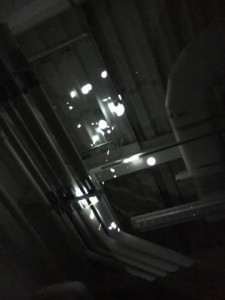 Gazing at the stars is an extremely personal and natural experience that many encounter, when we were children the lullaby, twinkle twinkle little star was sung to us.

It represents a simplicity and purity, the removal of outside influences, in which one abandons all thoughts and becomes fully encompassed by this magic. Deciding to code something so natural and pure strips it of these qualities that make it so attractive in the first place, becoming a commentary on how technology is now taking over humanities ability to access the rawness of nature and in life. Through the self evolving nature of this system, the originally star looking dots spread into one another and enlarge, morphing into floating bubbles, what we perceived earlier has been abandoned, forcing us to question what we are seeing and what it is evolving and its significane. Through the constant growth, development and expansion of technology today, the authenticity of the natural is minimized and instead we are replacing these experiences with the artificial, this is epitomized in my blackspace instillation. Also by projecting it on the roof, we are forced to lay and look up, a move that we also must do outdoors when gazing at the stars and the moon, however by projecting these on the roof of Heimbold that is largely pipes, the sterile atmosphere of the building is emphasized in what is supposedly the most ‘creative’ space on campus. 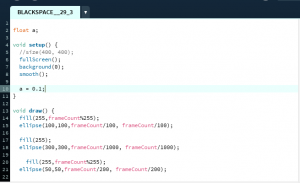 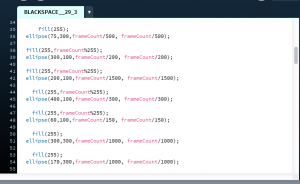 Overall, I am quite pleased with how my Blackspace installation went. I found it very interesting watching others and how each person in the class interpreted the assignment very differently from one another. This was my first time coding something for this class alone and although it was challenging at times, I persevered and stuck with it. I had to be very patient as I often found that when I thought I had the hang of it, issues in processing would occur, and therefore I was unable to run the code. I think if I were to change and alter my code I would do more to make it change over time and I would also like to use perhaps more than one projector so it takes up more space on the roof, effecting its overall impact. I think if I were to make take this simple code and then project in on all walls and surfaces of the room, roof, walls and floor, it would be extremely powerful, overwhelming and encompassing. The audience reacted well to the instillation, however I think the most effective part of it was the beginning in which it looks closer to the night sky therefore I would keep this in mind if I were to make further adjustments. I think these changes would cause the project to fall more directly into the category of a ‘system’ as it would make greater changes over time and would become self – evolving (more than it already is). 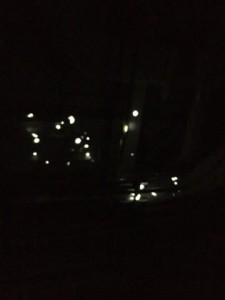 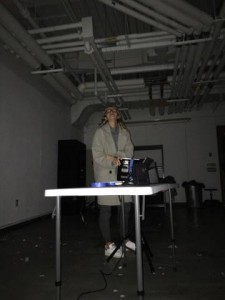