For blackspace I decided to play around with our polygon sketch from class. In class we had worked on adding more rules to the sketch as well as making the sketch self-evolving. In the beginning, I had no plan to even create a digital piece. It was announced that our blackspace presentations were the Wednesday after spring break and I figured I’d have time to find an analog system. I was in Atlanta over break and tried to immerse myself in spaces with systems. I visited museums in Nashville and Chicago, went aboard the MARTA in Atlanta, and walked around parking meters trying to find ideas. Above are some images from Nashville’s Frist Center for the Visual Arts and Chicago’s Art Institute. While the works of art I saw were incredibly inspiring, I realized I wanted to create my blackspace project in Processing to convey myself in a dark space.

I started playing with the last in-class sketch. We’d left off with polygons colliding and bouncing around the sketch. I was inspired to take this further by changing the side count (to make it more circular). A number of polygons in the sketch mimicked anxiety. They were bouncing off the sides of the sketch and shaking. To induce this disquiet I changed the background from white to black. Despite the unrest from the polygons, I didn’t want them to be too jarring to the eye which prompted me to use my color wheel scheme from system 2. This led me to use a greenish/blue hue opposite a randomized orange hue. The make the system self-evolving I created a colorMode and if statement:  if (location.y > width/2){radius = radius * 2;}, which enlarged some of the polygons off of the sketch.

I was most excited about adding music, especially a track that wouldn’t set any particular kind of mood. However, music inherently sets a mood. In a systematic way, I went through songs in my iTunes account looking for a track without vocals and one that was over 4 minutes long. The song I ended up choosing was “Insides” by Fort Romeau, a DJ from the UK. I had no idea who the artist was or the song. It was some download from NPR in their SXSW Top 50 songs playlist. Nonetheless, along with the colors, it sedated the anxiety from the polygons. After saving screens and exporting the video, I decided to play around with iMovie.

In iMovie, I decided to restart and reverse some of the screens. Doing this, I realized that I wanted to portray different angles or scenes of the polygons. I didn’t want it all to be a continuous film of videos in reverse and videos moving forward. This prompted me to create a “break” titled “phase”. Kind of like phases of the moon, this screen served to divide the films and pause. I wanted viewers to have a second to breathe.

The film began to remind me of space – even before I added the “phase” screens. To me, it captured the stress of the unknown, progress, and technology. With different polygons struggling to get out of the screen, flashing different colors, and finding themselves idle on the borders it captured my own anxiety. The music is a cover up of the anxiety since it’s much more smooth than the sketch. As I was told during the performance, it makes viewers want to dance and reminds them of a club.

I was disappointed with the number of idle polygons – the ones that seemed to just want to relax at the borders of the sketch. Some just disappeared beyond the sketch despite my code to contain them. I was also disappointed by the video quality which is something I have to play around with more on YouTube and MPEG Streamclip. I was surprised when the audience said that it reminded them of a dance club – which, despite the music, was not really my intention. I’d be really happy if this was played at some dance club. However, my intention was to convey anxiety and distress over the future and otherworldly spaces. With the darkness, now knowing that it reminded viewers of a dance club, perhaps I would have people move during the piece. Maybe dance can be a variable of response towards the film – onlookers examining my anxiety towards the unknown. It would be a reminder that despite my anxiety towards space people will move on or dance on.

Next time, I would see how many more rules I can add to make the system more self-evolving. Next time, I’d either take away the music or encourage people to move or dance during the performance. Ultimately, the music did set the mood. The mood it induced was not exactly the mood I expected people would have. Here are some images from the performance: 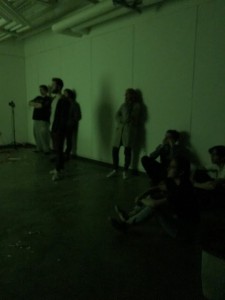 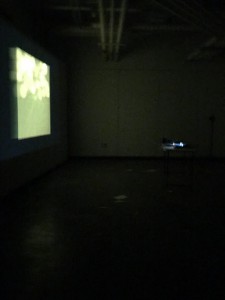 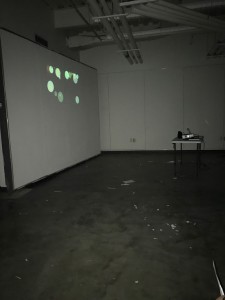