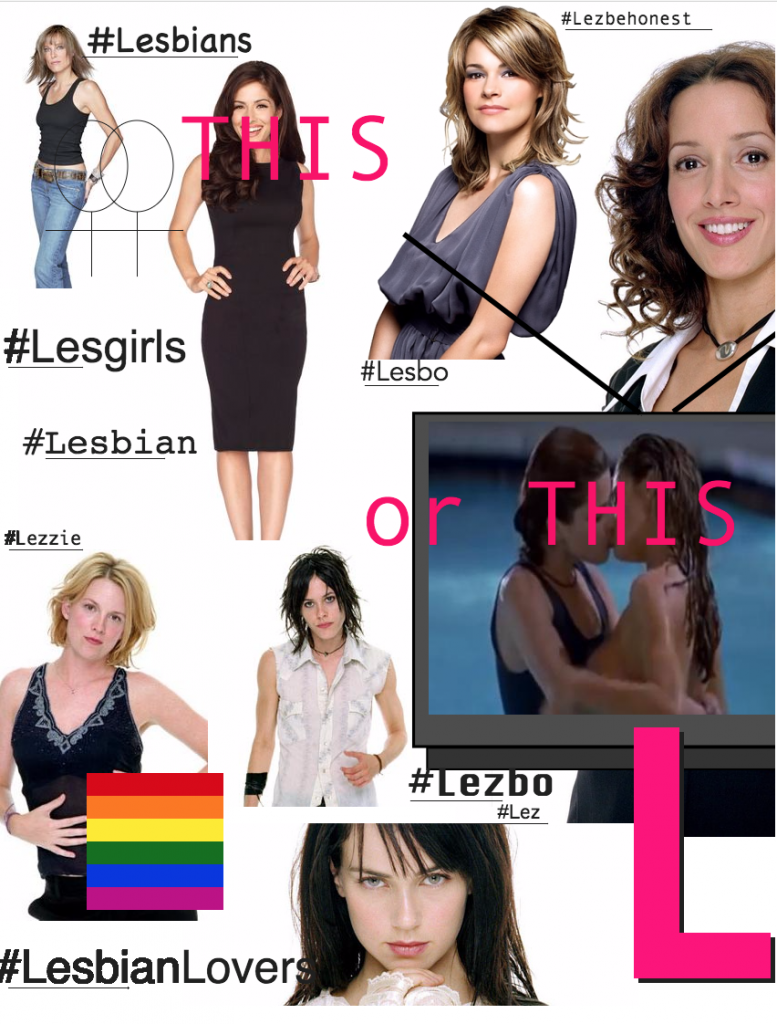 I’ve made many collages in my life. I’ve always enjoyed cutting out images from magazines or flyers, taping them to the lid of a shoebox and finding satisfaction in the collection of visuals. Making collages always felt very personal, I was unknowingly trying to represent a part of myself through the images I was cutting and pasting.

As a student of media, my life has been a path woven together by the television and films I’ve consumed. I’ve always looked to digital story telling to inform my own narrative. Out of the hundreds of series’ and films I have watched throughout my life, nothing has made as big of an impact on me as Showtime’s The L Word. This is not a unique narrative; many people attribute The L Word to their own coming out stories, as many people, like myself, need references when beginning their road to self-discovery.

Considering the fact that The L Word (2004-2009) was and remains to be the only American television series with a cast of lesbian characters, it has played an enormous role in the lesbian community. Though I cherish The L Word, I also find extreme disappointment in the fact that this affection I hold towards the show stems from the reality that it is the only one of its kind.

My collage is simple. I’ve included portraits of the main characters, symbols of the central themes, and recognizable sounds and dialogue from the series.   I’ve approached the aesthetic with an early 2000’s lens to mimic the visuals found in The L Word.  My collage reads as obvious and straight forward because unfortunately, in 2017, this is the extent of lesbian representation on television. I wanted to highlight the absurdity in the fact that this is all there is. These few women, these representations of the “l words”, are the only ones the lesbian community has to identify with on television. These women, these terms, hold so much meaning because of their extreme rarity in media.

I juxtaposed the smiling faces of The L Word cast members with an image of traditional lesbian representation on television. So often do we find queer representations of women through the male gaze, something The L Word addresses and successfully avoids. I also emphasized lesbian hashtags, a concept that both unites and devalues.

Throughout this process, I’ve found the creative elements, the selecting of sounds and images to be very straightforward and satisfying, while the construction of the collage itself has been more of a challenge. As this is the first project I’ve attempted to code without a direct reference, I’ve struggled with taking the tools I’ve learned through the readings and in class exercises and putting them to use without an outline. While this has been a struggle, it has also been a great learning experience. I’ve had to exercise problem-solving strategies, spending time testing different methods to reach my end goal.

Though I managed to solve most of the issues that arose with coding this piece, I have yet to be able to get rotations to work. I was unable to get the three animated elements to follow a center rotation. Every time I tested different rotation examples, my entire collage rotated along with the element I was trying to isolate. This is something I hope to address in class.

The L Words is a collage I’ve made to showcase the few lesbians on television, both in disappointment for their lack of company and deep appreciation for their existence.