My characters were limited by my artistic ability, but this led to a much more simpler and abstract design that I was influenced from watching the stick figure animations in my childhood. A lot of the design for the main character was influenced by a game called Fancy Pants Adventure. 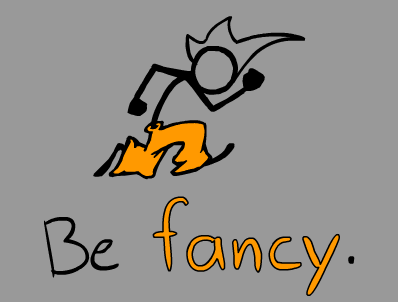 A lot of the design elements for the protagonist ended up being the same, such as the hairstyle for the protagonist. However, I wanted to put a unique spin on this style and blend it with music, which is something that has influenced me throughout my life. I thought the hair was very “punkish” which is something that I was aiming for as a design element. A lot of the bands in the 2000’s that I grew up listening to would have those kinds of edgy rocker hairstyles, the colored mohawks and the like. However, with stick figures, I thought that the character would be someone any aspiring musician could relate to in a way.

I enjoyed just how animated and expressive you could make stick figures, even with how simple they are. You could have a character doing all sorts of things and make the action even more exaggerated. 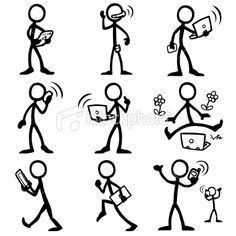 All the characters had elements of the music scene or an alternative look to them, which I certainly enjoyed giving and designing. A lot of stick figures are designed to be “bland” and not set apart from each other in an animation for example, but I liked giving them an air of distinction. For example, the roadie NPC was designed with long hair and always smoking a cigarette, which is a common trope/stereotype of the rock roadie scene that I thought I could play on. 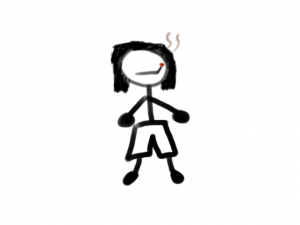 The cigarette automatically tells me that the character lives a rough lifestyle and is out on the road a lot. As for the villainess, she was designed as an opposite for the protagonist. The term “opposite ends attract” was a core principle for me in designing the character. So as the protagonist is leading a lifestyle of rock and roll and on his quest in the game, the villainess is an opposite, offering a life of peace and stepping away from his dreams. 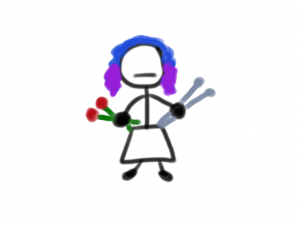 I chose the split hair colors as a sly reference to the choice she offers in being the villain of the game. The roses and the drumsticks also are a nod to that. The two worlds colliding was an interesting dynamic for me to explore. It is either the rock life or the life of settling down and building another life together. This reference image I found was the basis of the hair color. 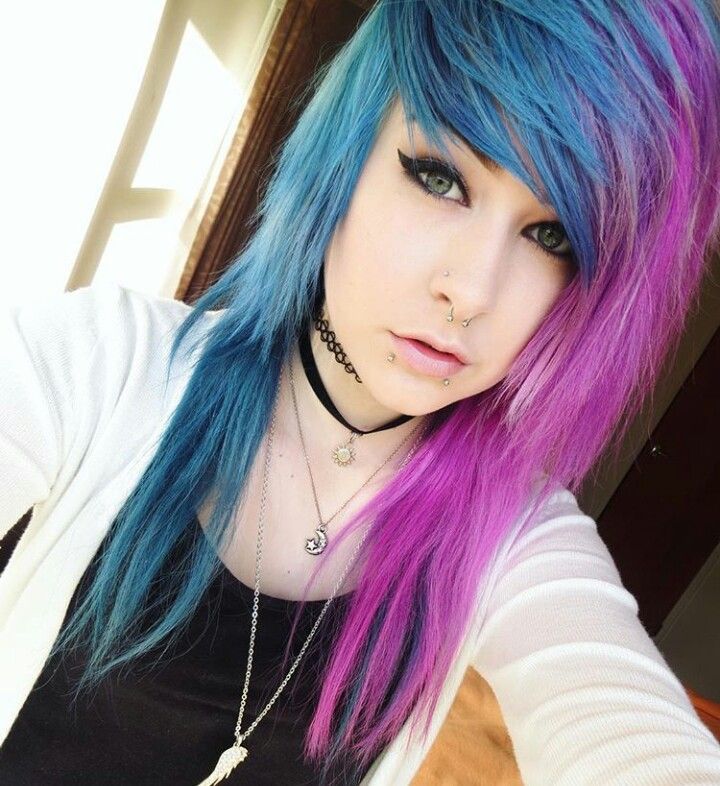 As per the protagonist, heavily based off the Fancy Pants Adventure game, I found that I would put the protagonist in my shoes, as a drummer just like me. I thought his story would be interesting as well as funny for any musician, putting on the best show of all time, playing the best gig that he can. 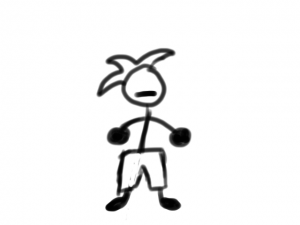 With the hair in mind, it ended up looking like a mix of the “mohawk” from the main character in Fancy Pants Adventure, as well as elements of Sonic the Hedgehog’s head mixed with a Super Saiyan in the Dragon Ball anime series. I liked the idea of hair being the distinctive item in all these characters, as I felt that looks would be important in distinguishing between all these characters. I liked being able to design one element that would stand apart from the others that would make them unique from each other. So I thought that hair would be the way to go as it is in some ways, a lot of people’s form of expression.