This project ended up rather simple. At first I had a lot of ideas for this project. I love anything that calls for interaction or input from a lot of people. My ideas all gave people instructions in one way or another. I wanted to work with music at first, to make a collective playlist and have it playing in Heimbold. I wanted to give people specific prompts like “write down a song that reminds you of him” and make a playlist based off that. I came up with a lot more, thinking that I could continue this project. But then it started to seem more conference project material, so I started thinking smaller.

A few ideas I had that I shared in class were having a box full of pictures, names of songs, pieces of writing that I find great and put them in a box for people to take. 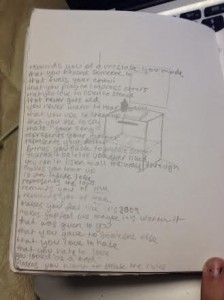 But I didn’t like this one so much. The other idea I shared was to give people tasks, for example making a collage and hanging it up in Bates. 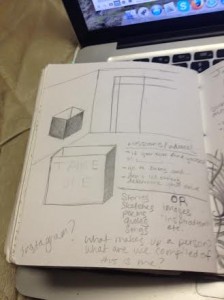 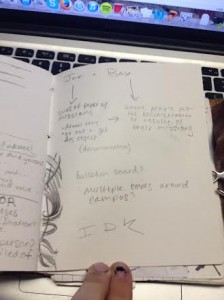 I wanted a way to check on whether or not they completed it, so I considered using a hashtag, or an email. I had trouble coming up with enough tasks, and I don’t like hashtags so I went back to an idea that I had originally scrapped. 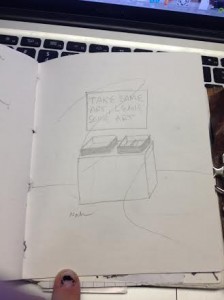 Very simple, but I think people may actually use it. I made sure to put it somewhere where people wait, and where there’s an adequate amount of surfaces for them to draw on. I’m worried about people taking the drawing materials, but maybe they will be respectful. Who knows.

Here’s a picture of the end result: 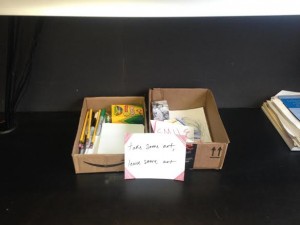 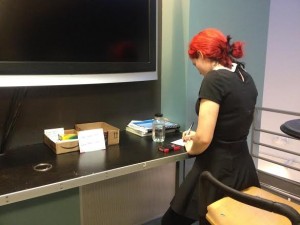 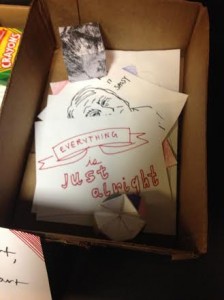 After leaving the boxes out for a while, I want to collect all the art that no one ever took and put it on display somewhere…