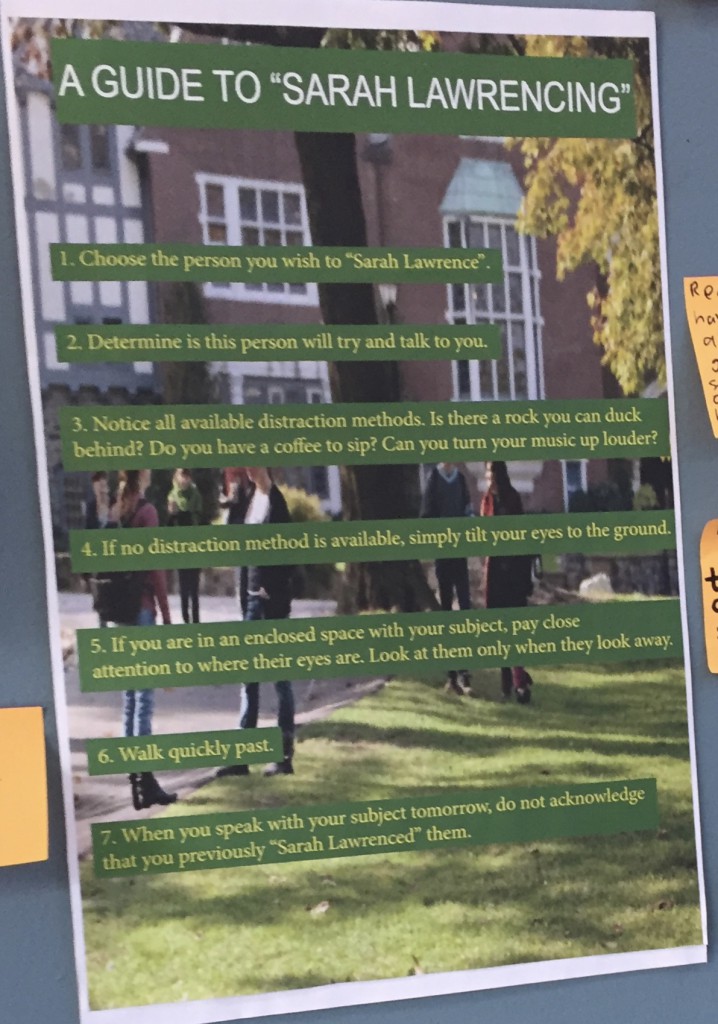 This project began with a poster that Andrea Gibson created, listing ‘Things that Don’t Suck’. They bring this poster to their poetry shows, leave sticky notes next to it with a sign asking audience members to add their own items to the list. I wanted to hijack this idea of a list with sticky notes. I settled on the idea of a project centered around ‘Sarah Lawrencing’, which speaks to the broader social climate on campus. I’ve complained about ‘Sarah Lawrencing’ and the broader social scene since I I started at SLC. I noticed that almost everyone I spoke with hated this culture also. I kept questioning why it still existed if some many students found it to be so negative. I felt that the idea of ‘Pillars of Support’, which is in Beautiful Trouble, spoke to this. The premise that large numbers of people comply with systems, forgetting that they have the ability to withdraw their consent from the system at any time. Virtually everyone I know, including myself, has ‘Sarah Lawrenced’ someone at least once, and yet we are the same people that complain about it. We complain about the action, yet we simultaneously comply with the action. I’ve noticed that once individuals enter a space, they mimic the social norms of that space and ‘Sarah Lawrencing’ is just another social norm.

Claire Bishop describes Tiravanija’s communal Thai meal exhibit, which he says only becomes art when viewers actively engage with the food and the artist, and other viewers. His main goal is to create a relationship between himself (the artist) and the viewer, so when the viewer is passive, this goal fails. This idea of collaboration and viewer participation was something I wanted to include in my art. I was nervous to create something that was completely reliant on other individuals, because the chances of the project failing were higher. However, I knew that if viewers did not engage with my art, then it would only speak to the very culture on campus that I was trying to change. 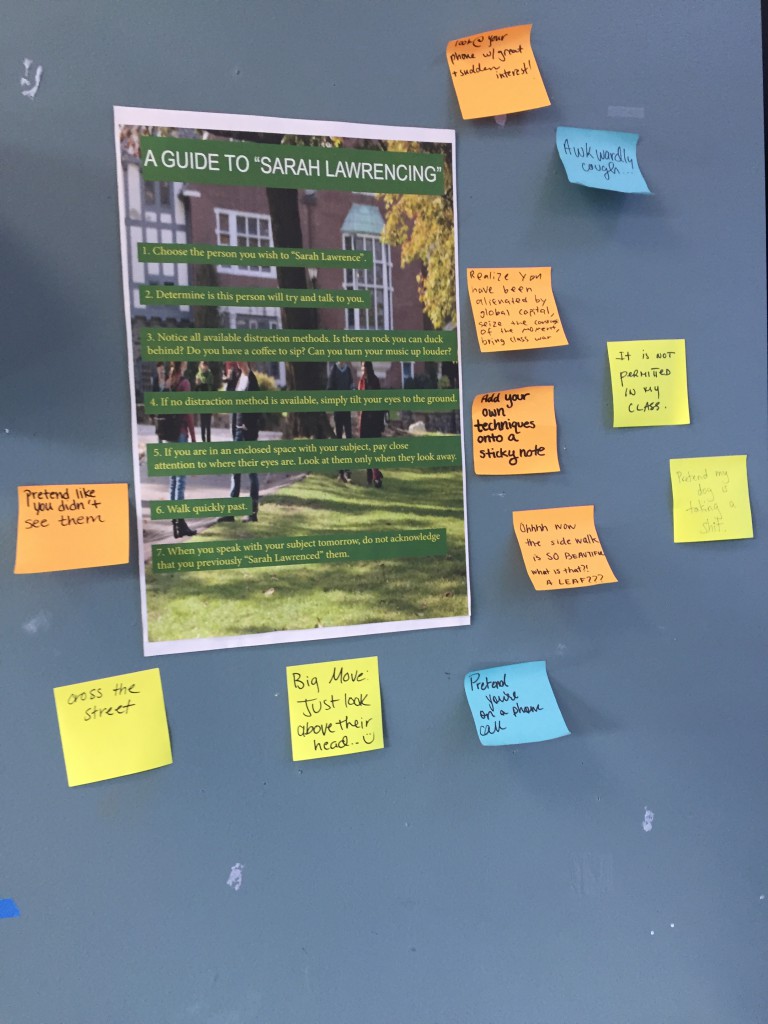 Originally, I wanted to be direct and serious. I planned to ask viewers straight-up, “Why do you ‘Sarah Lawrence’ your peers?”. I did not have any intentions of using humor, but after receiving feedback, I understood that this might turn viewers away. I planned for the entire project be made up of sticky notes, but during conference it was suggested I draft a poster to center the project. I attempted to make the poster as ironic, humorous, and ridiculous as possible. I also wanted it to emulate Sarah Lawrence marketing. I used the same font and colors as official SLC pamphlets, and I put a picture of Westlands as the background.

I hung the poster near the T.V. that is next to the yellow wall. I had copies of the poster (flyers), sticky notes, and a sharpie that I placed on the ledge below the T.V. I put a sticky next to the poster that said ‘Add your own method for ‘Sarah Lawrencing’, and another one next to the flyers that said ‘Take one please’ with an arrow pointing to the copies of the poster. The next day, the sticky notes and sharpie were gone. After talking to members of the class, I realized that my peers read this sticky note as an instruction to take any of the items on the ledge, rather than just the flyers. I went back and wrote ‘Do not take any items off this ledge. They are part of an art project’. This had better luck but a couple days later my items once again disappeared. 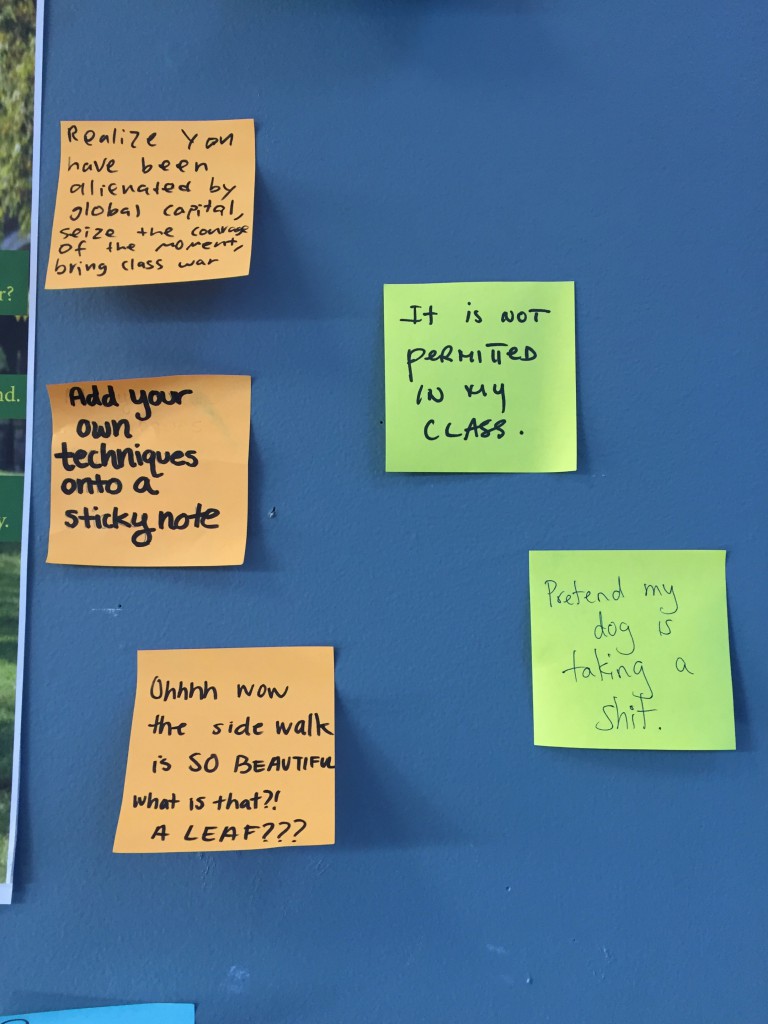 My peers did not participate in my art as much as I hoped for due to the location, disappearing materials, and ineffective communication. First, my installation space was not intended for art pieces. The ledge that had my materials is a space for functionality. It is where my peers place their laptops, books, etc. The wall is a space for posters, but my art was not just a poster, it was a poster that required participation. While this installation location did not spark participation, one advantage to this space was that people read my work as a regular SLC poster. My artwork blended in which further perpetuated the idea that this poster was one that a department of the college made. One individual even hung up another poster that overlapped with mine. Second, for the majority of the time that my project was up, the materials were gone. Third, even when the materials hadn’t disappeared, my peers did not understand what I was asking. My instructions were on sticky notes so they blended in with sticky notes that my peers had written on. Also, viewers would only know how to participate if they were less than a foot away from the poster due to the size on the font, sticky notes, and paper. While many of my peers did not add their own methods, I did see them take pictures of the poster or laugh at the poster. 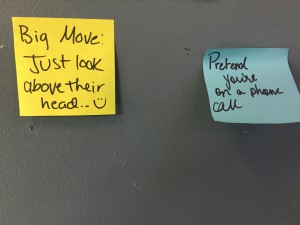 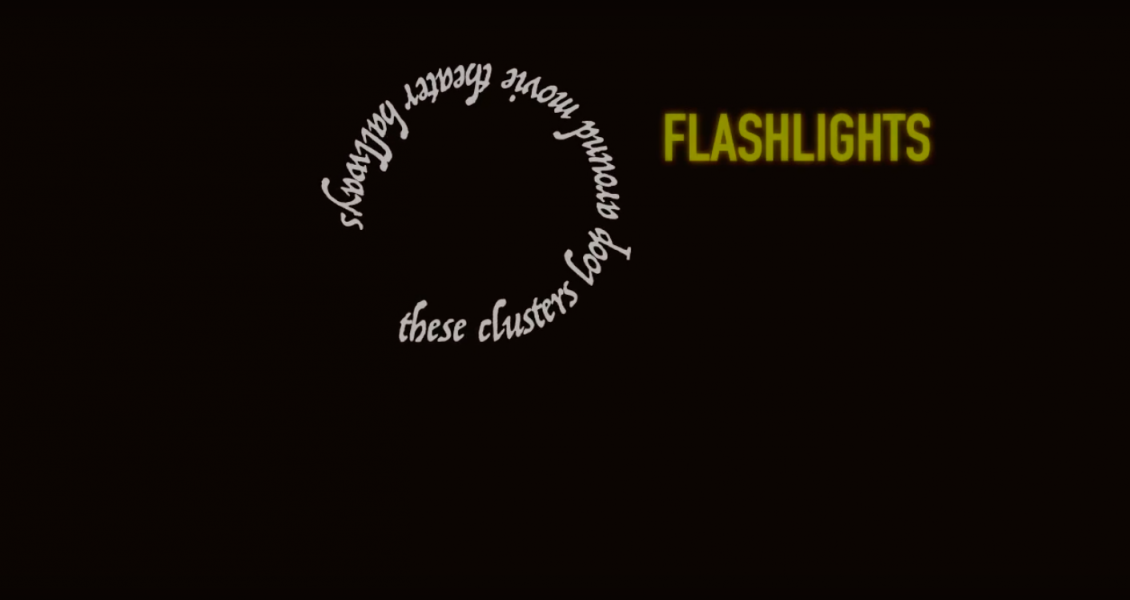