My conference ecosystem, Four Parameters, is inspired by Frieder Nake’s Matrix Multiplication, a series of mathematical solutions represented as computer art. My conference originally began with thinking about evolutionary art as I attempted to replicate the movements of ants in an art farm, but I found myself more and more compelled to follow in the footsteps of Nake and other artists who take mathematics and analytical data and find ways to transform this information into visual art. What strikes me about Nake’s work is his use of color, his ability to collage rudimentary shapes into a greater mosaic artwork, and his ability to create patterns in a digital space that appear almost woven or as if they were created from a textile. For my conference, I tried to create an ecosystem that, after being refreshed, or after input from the user, would change color and dynamism while still maintaining a sense of evolutionary similarity with the artwork prior.

Errors can certainly be a roadblock, but other times my errors provided me an insight and a deeper, more profound understanding of the artist’ design, and helped to propel me forward down a new path of inspiration. Still just a beginner to art and coding, I had some assumptions about how the code prioritizes the overlapping of calls to draw shapes and translate without the use of push and pop to separate design elements in an object. I had to reconsider the placement of objects and the very order and outline of my code itself. I saw quickly that the more organized my code was, I was able to maintain and keep sigh of my goals in the distance. When my code became longer and more syntactically complex I found myself overwhelmed by the code I had just sat down and written. I had to be extra thorough when re-reading and trying to find errors in my code that would break my art. 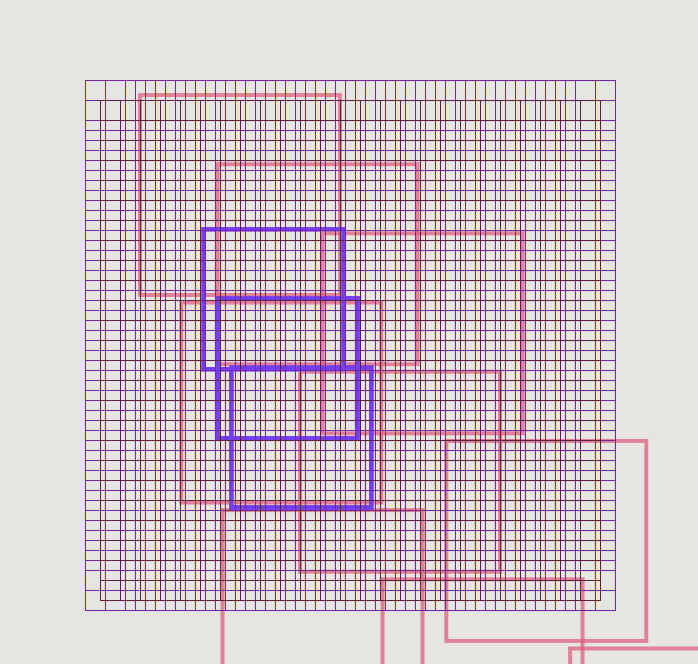 Nake’s work is deceivingly complex; I know this firsthand after trying to code my own Matrix. Nake’s work cares a great deal about space and composition, and so I had to reflect on those aspects as well. What I struggled with the most in my conference was manipulating the canvas and figuring out exactly where my shapes would be drawn. In my sketchpad I had an infinite amount of room to plan and layout my design, but once I started coding loops that would draw multiple shapes, the interactions of their x and y coordinates became hard to locate. That was also part of the fun, because sometimes my errors would lead me to very interesting mistakes.

Additionally, while working on conference I came to understand that there were multiple ways and approaches to reach my desired goal. I often had moments where I recognized the opportunity to just hard code a parameter, or make changing a variable accessible by input in the function parameters (for ex: function(x_asis,y_axis)). There were many ways I could go about my code, and finding the most effiecient solution wasn’t always apparent on the surface. I certainly gained a better respect for Nake as a pioneer of computer art at the intersection of mathematics. It was illuminating to work in his footsteps, and to consider that every process in art is intentional and mathematically understandable, and vice versa there are moments of artistic beauty in math as well.

My first several iterations I just worked with turning the basic shapes in objects that would be able to experience other forms of transformation (rotation, translation, change in scale). Even in the overlapping and multilayered chaos of Nake’s works, his choice of shape and specifically the color palette he chooses also the viewer to still distinguish and recognize individual shapes. Lines couldn’t be drawn on one another completely blocking out the lines below; I had to really pay attention to the opacity, saturation, and depth of field I was creating with my shapes, even if I assigned some parameters to move randomly within a given boundary.

Next came rotations and finding ways to slightly alter my ecosystem every time the user refreshes. One of the other reasons I really like working with an evolutionary system in the vain of Nake’s work is the very subtle white and gray backgrounds he frames his works on top of. While someone else may say that Nake’s backgrounds don’t lend much to his artwork, I would disagree and say that all of Nake’s colors and even the materials he prints on adds to
the collective composition. I love thinking about the modernity of Frieder’s cubic design and palette at a time of few graphic designers or artists, but how his design already prefigures and predated the waves of graphic design that will follow after him.

Next, I changed the color scheme from the original blue, yellow, and red to rotating between several different pallets on refresh. When creating this evolutionary system and thinking about Nake’s work, I always wonder how a change in color can completely transform a work’s tone and atmosphere. Nake’s Matrix Multiplication and many of his other untitled works have a very deliberate color composition, and I wanted to follow is his footsteps.

Again, I struggled the most with translating and moving around the canvas, but my inspiration still burns and I have several more things to add! With additional time, I hope too the ability to take in user commands with the mouseX and mouseY values to rotate individual squares on their axes. I also want to elaborate my pattern more and on refresh and new pattern should be generated. With certain keystrokes or presses the user should also be able to change the size of some of the squares on the canvas.

Overall I think my ecosystem needs some tuning up and optimization, but I am very enthusiastic with more attention I can make a very interesting ecosystem like Nake’s work that explores gradualism, pattern, collage, and color in a mathmatic vein.