To start, I knew I wanted to set my game in a space world with the player as an alien. After I did some research on different items that were in space, I decided to set my world metaphor to one where the player would be an alien who was searching for the sounds from the Voyager Golden Record. While I was excited about this at the time, as I thought that it would provide me with a good basis and good sounds, I think that instead I let this idea control too much of my thought process.

The goal of the player was to gather cassettes that had songs from the record, specifically the ones from North America for this level. The help and obstacle items are speed ups and slow downs, which are in the style of the fast forward and rewind buttons on a music player. The fast forward made the player move faster and the slow down made them move slower. This is one element of my game that I really do like because I think that at first the speed ups seems like they will be the helper and the slowdowns seem like they will be the obstacle, which is true to an extent, but if the player collects too many speed ups, they won’t be able to control their movement as well, and so then the slow downs become the helper item. 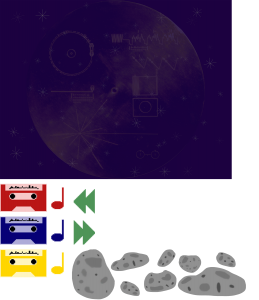 I think one way in which my game is lacking I think is in zones and bounds. I think the disconnect for me was using the items to create the zones, which instead I tried to do with the boundaries, which made the game much less dynamic. In my final mod, I leaned into the maze elements of the game and made it so that each area (as delineated by the colors of the notes and cassette) only had one way to enter each other area. 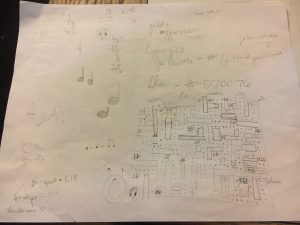 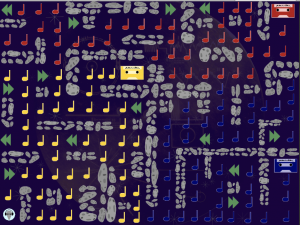 One change I would make is to change the red cassette and notes because I think in context with the green speed ups and slow downs, the player may get confused with the color narrative, thinking that the notes will hurt them. I tried to push back against this idea by giving the same noise to all of the notes, but I still think that color would make this change more clear.

One of the choices I was happiest with I made at the end of development. I changed the camera so that the player could not see the entire map. I think this added to the gameplay in that the player had to struggle and search more to find the cassettes. This zoom in also made the effect of the speed ups and slow downs more difficult and more obvious. I think this was part of my understanding of the importance of Costikyan’s ideas of struggle because I was worried my game was too straightforward, and so I wanted it to be more difficult for the player to understand exactly “what to do” immediately. 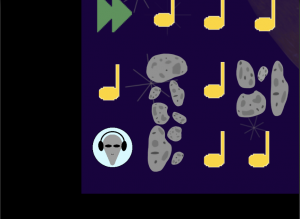 I think my game misses some of the elements that Fullerton needs for it to be a game, and in some ways, it leans toward more of a puzzle. In its current form, this game can be kind of more akin to a puzzle where the player has to figure out where to go to find the “right answer” in the form of the cassettes. However, I think my game does have good character to make the player more invested. I merged images of astronauts and their helmets with traditional visualizations of aliens (with gray heads with large craniums and big eyes) to make my character, who’s just an alien head inside a helmet with big headphones on and a smile on his face. If I make this game into my conference game, I would add animations that would change with different effects to his speed and when different songs play on cassettes. 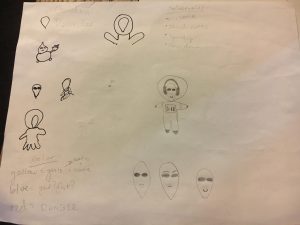 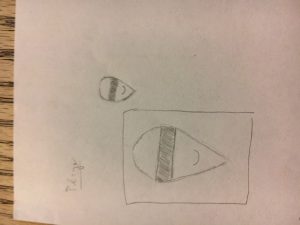 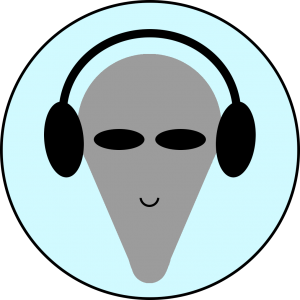 If I decided to make this game my conference game, I would definitely change a lot, but I ended up being happy with the general look of the game and the basic concept of music collection. Despite this, I still think I learned a lot about game design and things to avoid in the future, so I think that making Golden Recorder was a good learning experience.