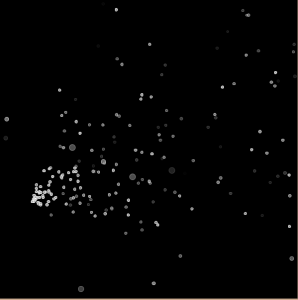 With the particle system the key part I wanted to make sure was there was that it was player controlled.  From there it was trying to figure out how to make that pleasing to look at. I was playing around with different ideas and I tried having the particles always tend toward the center of the screen and the effect it had made the piece feel a lot more alive than it previously had. Once the randomness of the particles was set so that they didn’t stream out in a line i added a few more variables like bubble size and color that changed based on where the cursor was.