Farm Land was my mod of the collection game tutorial. The focuses of the redesign were world metaphor, zones, and bounds. All three of which i struggled with. Coming up tot the paper game I couldn’t think of any world metaphor to use. So i ended up deciding on the first thing I thought of that collects things. Rabbits collect food. From there I made my collectibles a carrot and seeds. This struggle with decision making and delay meant that my paper game wasn’t as developed as it could have been which further hampered the development process.

The goal of the game is to get 20 points from collecting various foods around a field. seeds were worth 1 point and carrots worth 5. The players only obstacle during this were foxes that patrolled a set section of the map and if collided with would end the level.

As part of the class critique, it was made clear to me that due to the sameness of the collectibles there wasn’t really any sense of zones and bounds and so I had to diversify my collectibles. So I added a cabbage.

The cabbage didn’t give any points but increased the player’s speed.

I then reorganized the level so that the carrots were in the top section that the player had to pass by two foxes in order to reach.  Cabbage in the bottom so the player would need to go there to pass the foxes easily enough. And the right side of the screen would be the majority of the seeds. The result of this meant that there was a linear way to progress through the level and again the idea of zones and bounds wasn’t fully expressed.

Part of my issue I believe was my struggle with the map. I was very shut off from change in terms of my map and I think the game really needed a different map layout in order to achieve a better gameplay. 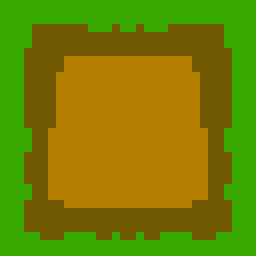 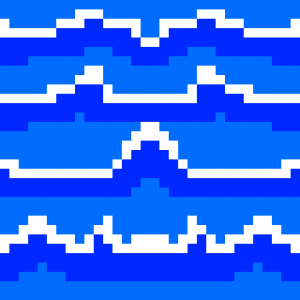 I went with a kind of tile set design for my obstacles which worked well for the water but didn’t work out for the land boundaries. I think the ocean set to the right of the screen giving the best definition of space was the thing I was happiest with about my game. I later tried to add a pumpkin to the map. 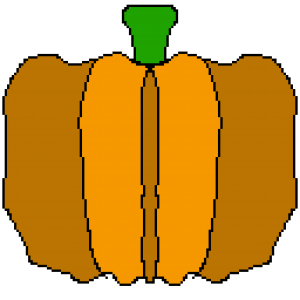 the problem here was that I used a higher resolution when making the pumpkin and it made the collective art style of the game too distant from everything else.

The player design I was happy with as with the fox. Movement was satisfying and the sounds of eating things were in line with the charm. I ran into problems with the foxes pathing. Using the first set of marker based pathing my foxes would glitch out of bound and sometimes spasm in place. Eventually, for the hallway submission, I used the bound system learned from the shooter game. This helped with the bug but the foxes would sometimes still have erratic behavior.

Overall I’m not very happy with how this game turned out. That being said I think that has more to do with the struggles I had during it and I think I could do a much better job now. I learned a lot from the game and it definitely improved my results in the following mod and my general workflow going forward so in that sense it was a success. If I were to continue work on this game I think I’d redo the artwork from the ground up to give everything a consistent vibe and redo the map to allow for more exploration from there I think the game could really take off.