While conceptualizing this project, I had Starseed Pilgrim on the brain.

Putting together a musical puzzle platforming game would have been way over my head. But I wanted to create a mechanic similar to that game’s perpetually-expanding black hole, which ends your game if you touch it. No matter how many platforms you build, no mater how far you go, eventually you’re going to touch the black hole. It’s an inevitability, and if it’s not then I haven’t gotten far enough to know that yet (it’s a hard game). The point is that Cosmic Armageddon is coming for you, and that you will eventually lose no matter what. This was to be the crux of Space Crisis 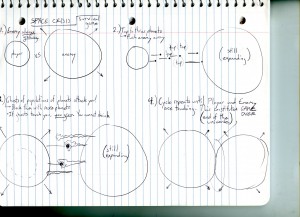 The premise is this: two giant and mysterious celestial bodies (represented by big circles on either side of the screen) are at war. The aggressive one is constantly expanding, threatening the other one. If the circles touch, the universe ends and the game’s over. The player represents the more passive space-circle on the other side of the screen (or it represents the player). I devised a planet-throwing mechanic (which amounts to ‘tap to shoot’): the player flings planets (smaller circles) at the enemy circle to keep it away. The dead populations of those planets then fly at the player circle and if they touch the player circle, it grows. You can block ghosts by throwing more planets, however. So the idea was that you’d be throwing planets at the enemy circle to impede its growth, but then the ghosts would punish you for it be punished for it by forcing you to grow and come closer to the enemy circle. And the only remedy is to keep throwing planets, which repeats the cycle. The only other option is to embrace doom. You can’t win but you can prolong the inevitable for as long as you feel like it.