The machine I chose for this project was a miniature, corded fan.

In initially examining my object, I could see that harnessing the energy of its centrifugal motion could make for a very powerful artistic tool. “Accessing the main points of motion on the fan will be critical in working with it as a drawing machine,” I noted in my primary observations, “as I can attach objects to the blades or allow them to manipulate other objects.”

I needed to gain access to the moving parts of the fan in order to start repurposing them, and so I removed the outer ribbed casing, exposing the blades. The casing was attached to the body of the fan with a series of small screws, which I removed with a screwdriver—a process from which I got a kind of perverse enjoyment, even though I was not purposefully or permanently ruining a perfectly useful, functioning machine. (“I won’t be making any permanent adjustments to the fan and will keep all of its parts to reassemble later,” I write.)

My earliest notes indicate that I wanted to try to work with a variety of materials, having the fan perform multiple artistic functions. I speak of potential experiments involving “applying paint or ink from an outside source and allowing the rotation of the blade to create a pattern,” and “attaching strips of paper or cloth to the fan blades and allow[ing] the rapid movement to alter them.” My first tests, as well as my final piece, more closely follow the predicted trajectory of the latter.

I discovered that attaching lengths of yarn to the three fan blades and letting ‘er rip quickly produced a twisted, tangled mess—especially if, as I later figured out, I held the fan so the blades pointed towards the ceiling. I enjoy yarn as a material because of its equal measures of versatility and unpredictability, in that while it can be forced into adapting almost any tidy shape, it can lose this shape within seconds when exposed to just a bit of chaos.

After my yarn experiments, I considered a number of other materials that I might have been able to slice into strips and apply rotation to create similar long, loose, compact knots. After rejecting fabric (I didn’t have enough of it in the house) and newspaper or paper strips (I imagined that they would be unwieldy and rip), I decided on plastic bags, which I thought would be both flexible enough and visually different from the string I was using. The plastic bags produced similar yet less distinguished knots, confirming my hypothesis.

While handling my finished pieces (each composed of nine strips of plastic or nine pieces of string; three per fan blade), I noticed that the fan was not so much tying them into actual knots as twisting them into knot-like shapes. Therefore, when I decided to display the pieces as one unit, similar to a wall hanging, I noticed that the string in particular would begin to unravel when subjected to gravity. I did not mind this, as an art piece fragile enough to change as a result of another force outside of my control was interesting to me.

Having ultimately used my found machine to create sculptures over whose final form I had very little control, I also decided to use it in the presentation of my final work. These final videos were taken with the fan directly under the tapestry, blowing air up onto it from underneath and creating a listless, fluttery effect that put me in mind of a tree in summertime (the colors, to me, also read very summery). 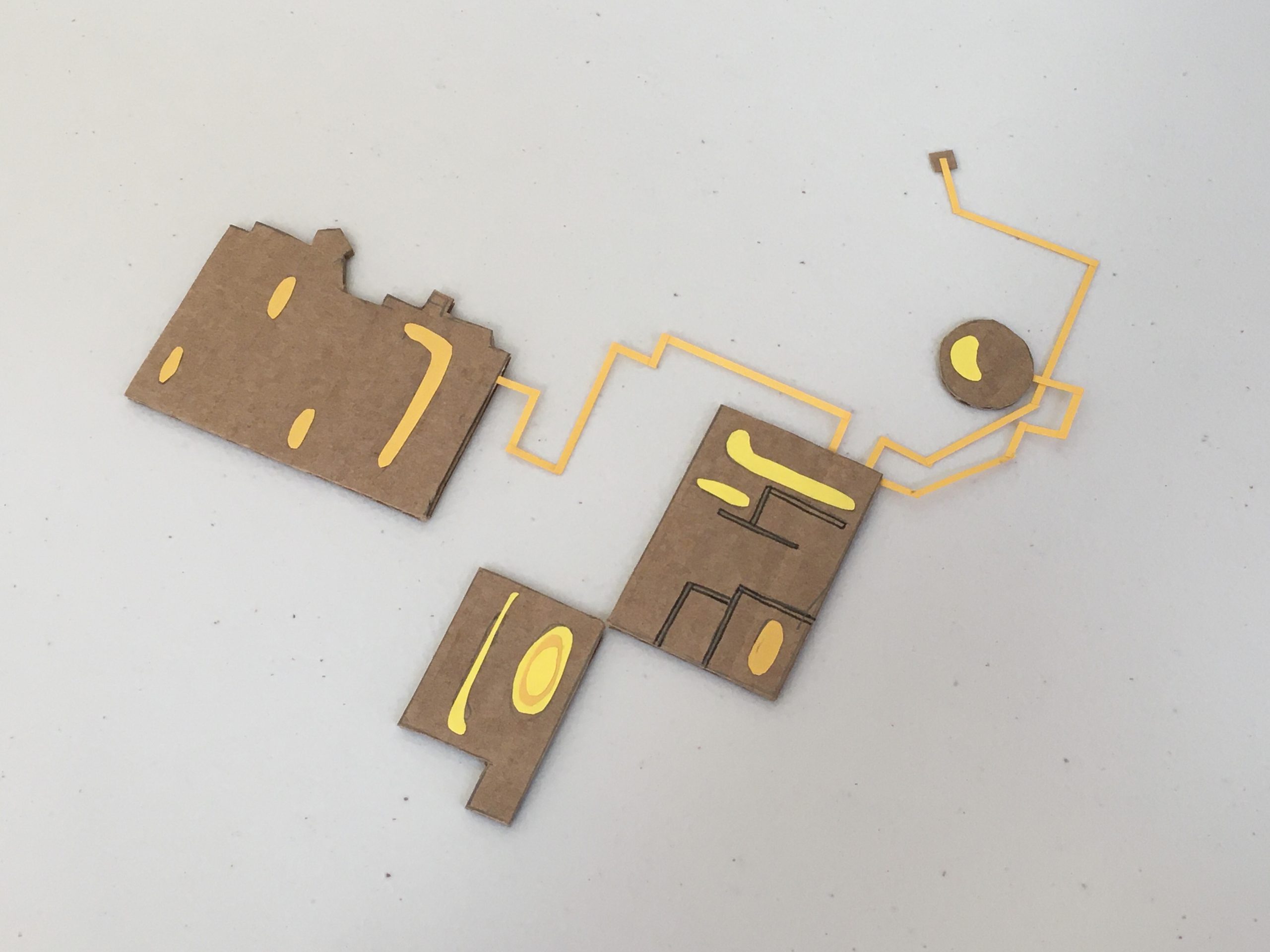 Drawing Machines: ‘I Am Here’ 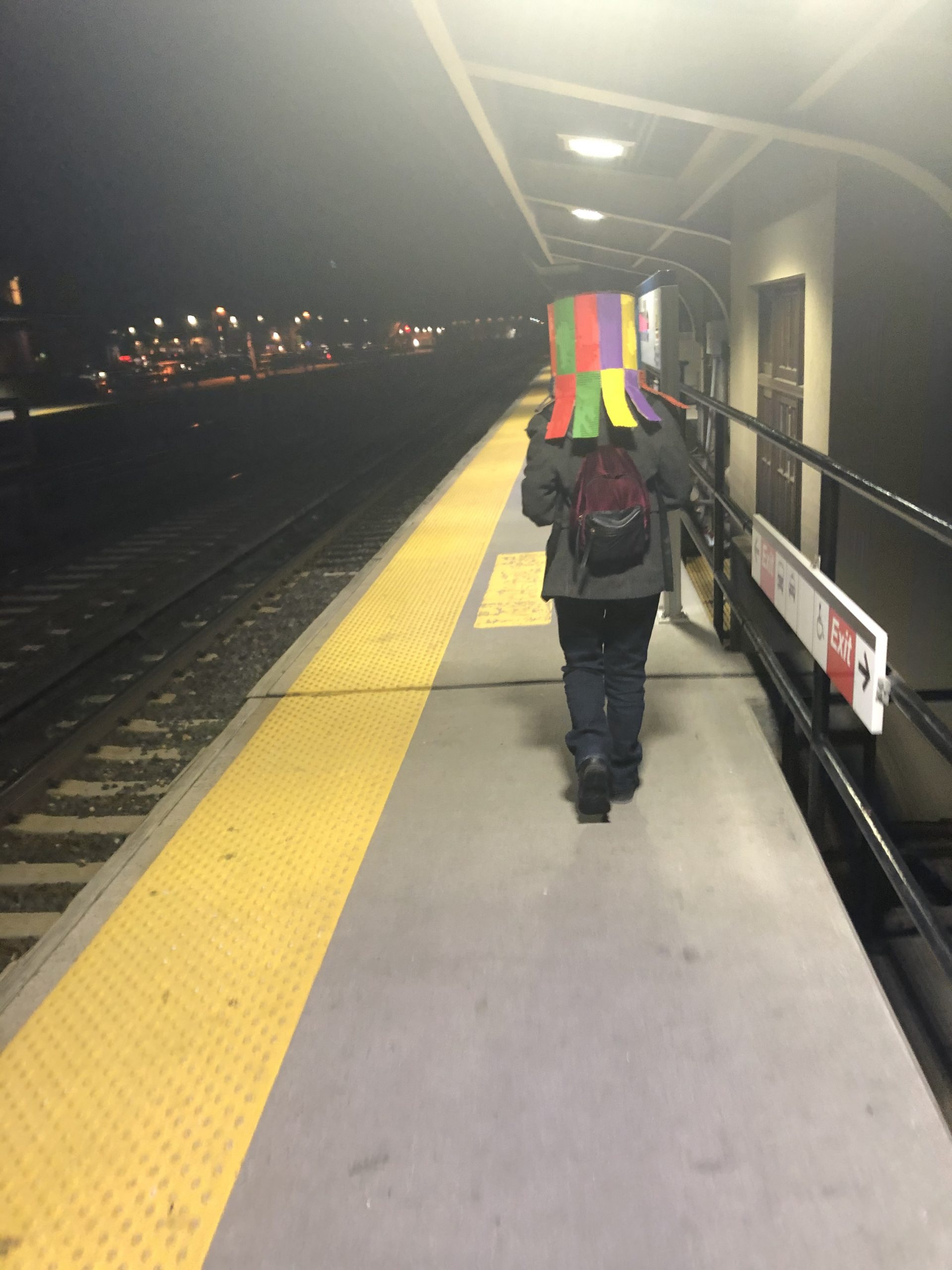