Coding this game was quite a journey. At points in time, I spent 1 to 2 hours dissecting if() statements to fix bugs or things that I didn’t like about the game. The collision was rudimentary and barely worked at the start, and after I did some thinking and testing, I was able to make it work and be enjoyable for the player. I spent a while making different soundtracks for the game before I was halfway done coding because I wanted to hear what the game would sound like to help me develop it. In total, I only ended up using about 3 sounds, but this game really centers in on minimalism, so I’m satisfied with the sounds, because they do just enough rather than too much. The first picture in this post shows a rough outline of how ridiculous coding this game was/how frustrated I was in trying to overcome some obstacles (that I managed to). 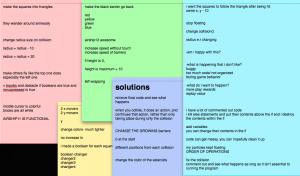 I started with the basic seeker code, and messed with it probably around 40 times until I got to where I am now. It was originally a bunch of vehicles that were attracted to or repulsed by the mouse coordinates, depending on if the mouse was pressed or not. I played with color and the speed and movement of the vehicles, but it didn’t seem to be enough. 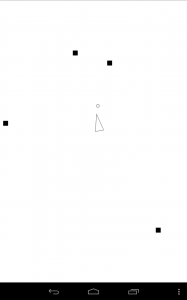 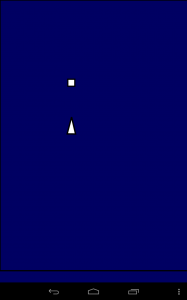 I got rid of all of the vehicles, except for one, and I changed the collision from the mouse coordinates to the coordinates of the one vehicle (triangle). Then, I added a floating rectangle, and played with various movement options, and outcomes from collision. My initial idea was to have a few rectangles floating around, and once the vehicle collided with one of them, it would follow behind, and this would apply to each rectangle, one behind the other. 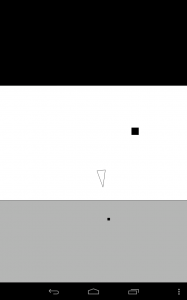 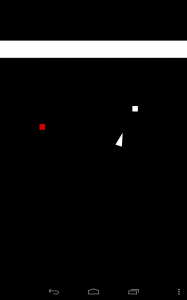 Then, I thought about making the rectangles surround the vehicle on each side, and I had serious trouble doing this. Probably about 2 hours of trouble. It finally clicked in my head, and I assigned a boolean to each rectangle collision check, so the outputs i was making would last past the duration of the collision. I finally did some tweaking and made the rectangles shoot away from the vehicle after all of them are collected and the mouse is released. A short time before this, I implemented some basic wrapping, and then fixed it after I made movement changes in the vehicle and rectangles.

Parts of coding this game really stumped me, but through double-checking, testing, and tweaking, I was able to rid it of bugs, and be proud of the game in its final stage. 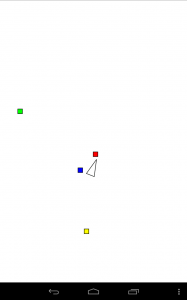 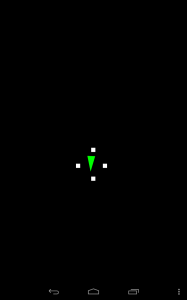