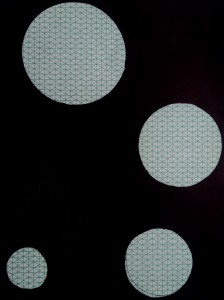 For my conference project I wanted to go off of my previous map. I was happy with my self-portrait but finally I realized it had too much information. My idea about national identity didn’t come across as much as I initially intended it to. That is why I’m dedicating a whole map to this thought.

At the beginning of the semester, when I started collecting materials for this course, I turned to a family friend who used to be an art teacher. She gave me all types of materials she had from those years: from old sketchbooks to beautiful colored pencils. In her package, was a stack of papers with an interesting looking grid printed on them. I knew I wanted to use them in a project. But I had forgotten all about them until I recently rescued the stack when trying to figure out what format I wanted to use for this project. It’s not that I randomly picked them up and decided to use it on the spot- I was able to connect the peculiar grid that appealed me with my idea on national identity.

As you can see, the grid forms many triangles. With them I wanted to represent a duality that recently became a triality when I started college. The initial duality was composed by my two backgrounds: the Spanish and the American. This third side represents a new state, product of the two original ones. It’s an undetermined state that I don’t fully understand, but that I know is there. Therefore what I have decided to map is this uncertain state that came about when I moved to Sarah Lawrence. So what better place to map this feeling than our campus?

I decided to take four places around campus where I’ve noticed myself being aware of my national identity throughout my first year here. Those being: Bates, Titsworth, the Library and Hill House. I chose to represent them with a circle for two reasons: on the one hand I wanted to make a contrast with the very geometrical appearance of the grid. On the other, circles tend to be indicative of location (in this sense, also creating a conceptual contrast because on my map they represent, in a very standard and defined way, a place where I feel myself undefined and questioning). I caught myself thinking about my identity for different reasons in each of those places- but that wasn’t something I wanted to map, because ultimately, it comes down to the same feeling, regardless of where I am.