I’ve been experimenting with the original code for “Bammer” and warping it into more of a sandbox art piece. The form of the game is constantly shifting, and one of the ways I did this was by adding a score to the bottom of the screen. The score constantly climbs over time, and is reset to 0 upon collision. 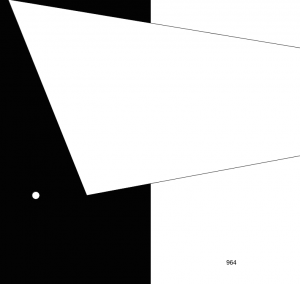 If the score reaches a certain number, say 1500, a few events will happen. For example, one of the triangle’s points is now mapped to the user’s X or Y coordinate, or there’s a black rectangle taking up one vertical half of the screen. Other changes include the growing/shrinking of the user’s circle as it hits certain X and Y coordinates, as well as changes in the speed of the triangle’s random morphing. 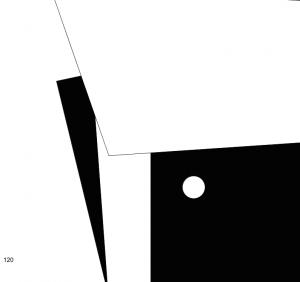 One last part about this game: you can intentionally collide with the triangles, with the only punishment being a score reset, but the triangles keep the shape you’ve put them in before the point of collision. The game could be played just as something that you can alter visually with your decisions and movements. 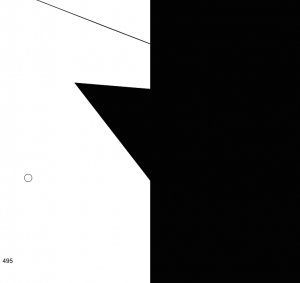 Originally, “Bammer” was a game of a player-controlled circle attempting to avoid numerous pulsating/vibrating triangle obstacles. Over time, the triangles grew in size, and their motion was hard to track (as it is randomly generated), but we needed to further design the game and add new elements. Each member of the team started coding their own version based off the random triangle code, and I chose to design something that’s more aesthetically pleasing; I wanted to see how cool I could make a game look using only the colors black and white.