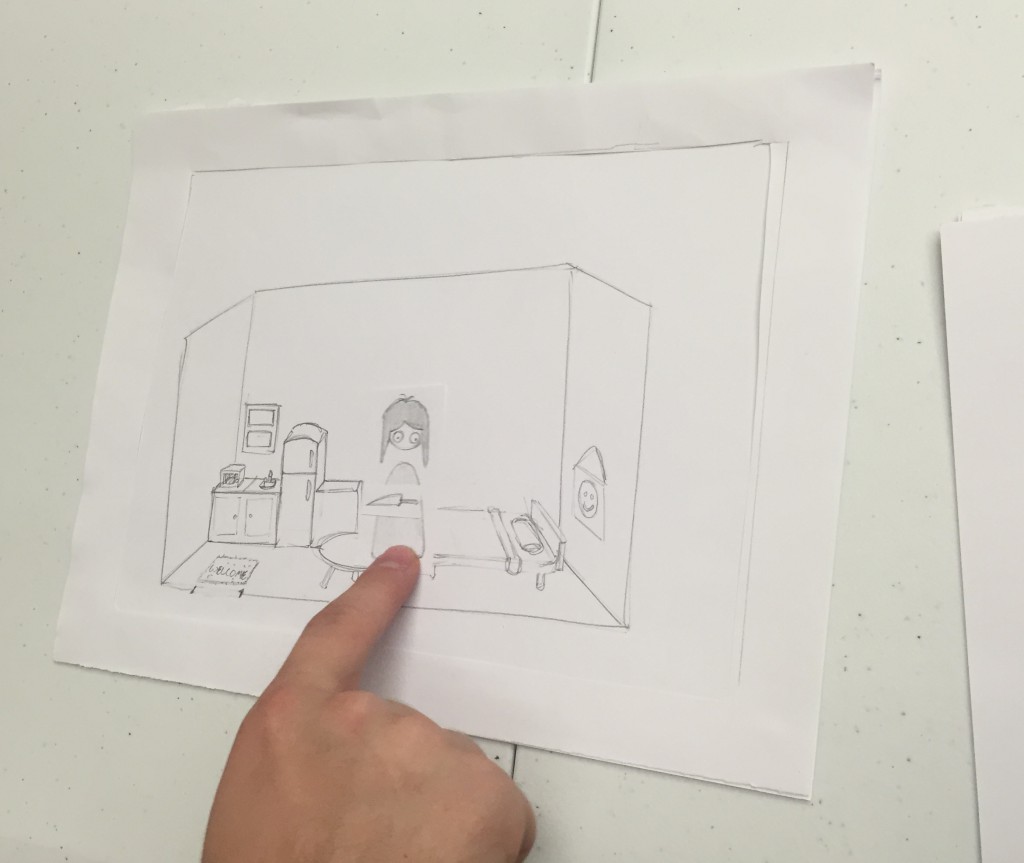 The start of the game.

For my second paper game I decided to revisit the War of the Clowns story from the perspective of one of the townspeople. I designed the game as a simple RPG with five scenes: home, home internal, park, convenience store, and convenience store internal. The player could travel freely between these scenes. The actions available to the player were moving from side to side, picking up items (a knife and a gun), and interacting with certain environmental objects (the bed, the clowns, and the other townspeople). The game had a time limit of five ‘days’. A new day would begin each time the player interacted with the bed. For each day that passed, the clowns would gain another follower in the park. After four days passed, the clowns would equip bats and the convenience store (where the gun object could be found) would close. On the fifth day the townspeople would turn violent and kill the player, ending the game. If the player killed a townsperson in sight of another townsperson, or killed one of the clowns in sight of a townsperson, a police officer would come and arrest them, ending the game.

Visually, I attempted to illustrate the difference in perspective from the first iteration by giving the clowns a more threatening appearance and humanizing the townspeople somewhat with the inclusion of eyes and hands. I wanted to communicate that they clowns held a sort of hypnotic influence over the people gathered in the park, so I created two different versions of the townspeople, a “normal” version in which they had pupils in their eyes, and an “indoctrinated” version that was lacking pupils. I also decided to alter the scale somewhat, replacing the multi-story buildings with a single-story house and shop. I created red blood puddles to emphasize that the player character was more affected by the violence than the clowns were in the first version. 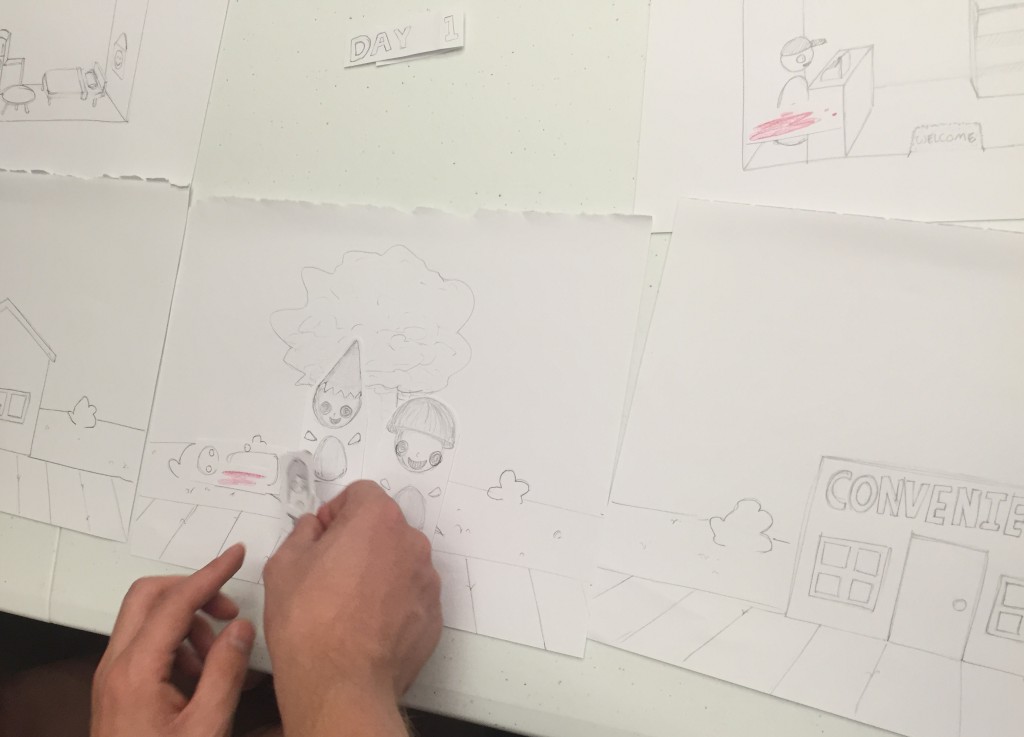 The player did not behave as expected.

The playtest did not go as expected. The player elected to resort to violence almost immediately, taking the knife from the house on the first day. They tried to cut down one of the bushes outside their house, an action that I declined, and then went on to murder the convenience store clerk. They then took the gun and used it to murder the only townsperson with the clowns. Because no one but the clowns witnessed these crimes, the player was not immediately arrested. The player then proceeded to kill both clowns and went home. They asked if they could kill themselves, an eventuality I had not anticipated. I declined their request. The police officer arrived at their home, and they murdered the police officer (whom I had neglected to provide with a weapon). As there were no more possible actions, I ended the game at this point. 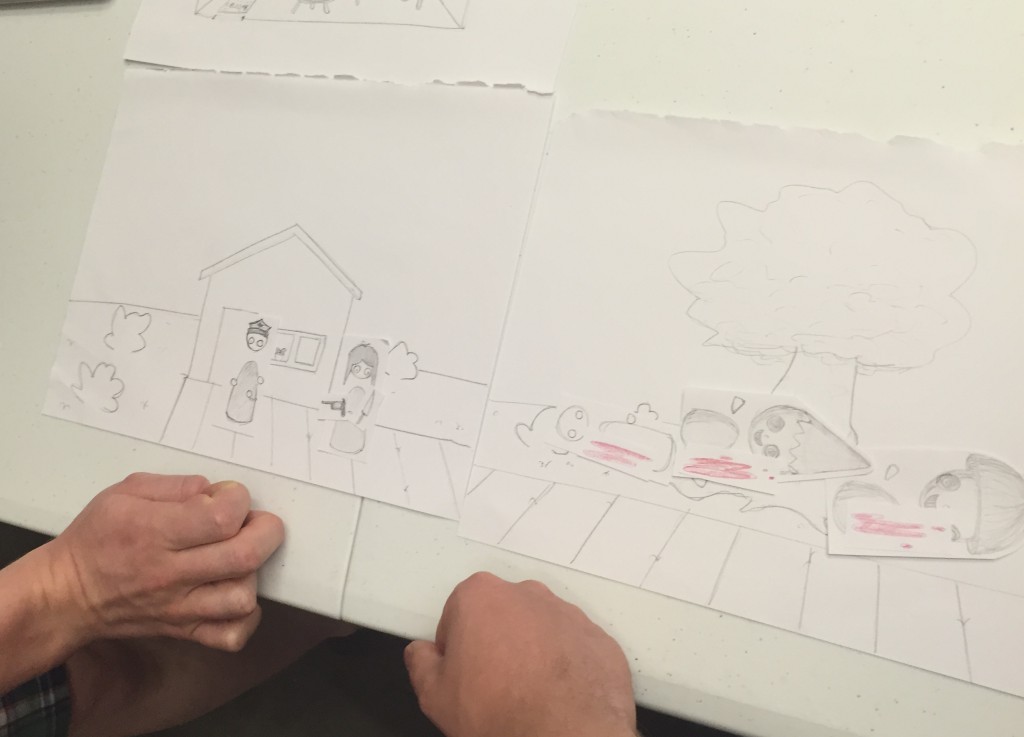 The player killed every other character in the game on the first day.

The most striking lesson from this playtest was undoubtedly the tendency of players to test the limits of your system. I expected the player to behave within the bounds of normal social behavior, and expected them to resort to violence only in the later stages of the game, if ever. In retrospect this was an unbelievably foolhardy assumption. That being said, although I was taken by surprise and unsure of how the system would respond in a couple of cases (killing the only spectator in front of the clowns, for example; do the clowns call the police? I decided no), overall I was able to extrapolate a response from the rules I had laid down for the world. The fact that an unexpected narrative emerged from the system I had created feels like something of a triumph, and, in my opinion, led to this iteration being feeling much more “alive” than the last where the player’s actions were much more severely limited.

I also realized a short way into the playtest that I had not given ample consideration to the tendency of players to experiment with any interactive game object they are presented with. I expected the player to take an initially non-violent approach, but the only obviously interactive objects I provided them with were implements of violence. If I were to do a third iteration on this game, I would be tempted to hide the weapon objects from the player somewhat and provide them with interactive objects that might encourage them to explore other avenues.

It is also worth noting that the bed object did not give any indications as to its interactivity, and although this issue did not impact the playtest, it would likely have proved to be a stumbling block for any player that did attempt a nonviolent approach.