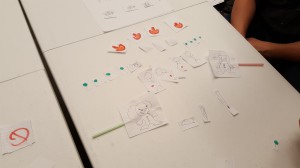 The first paper prototype I did was based on a fiction piece title War of the Clowns. This story was about two clowns who have an argument with each other in a city. No one really pays much attention at first because they are clowns and they don’t believe it to be real. As the argument escalates the citizens begin to take notice and side with a clown. Soon the clowns are beating each other up and the citizens are killing each other and destroy the city. At the end we see the clowns leaving the city with all the coins from the destroyed city and move onto the next city. In my prototype, titled Mortal Clownbat, you play as the clowns. 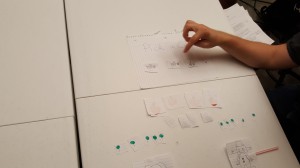 The beginning of the game

You can insult each other, throw pies, and hit the other with a bat. As you insult each other more people crowd around you. And when you use violence, the police begin to take notice, but people begin to fight. The goal of the game is to get the all 4 fire emblems to pop up without the 4 handcuffs popping up and also while not popping all of your fellow clown’s balloons. If you achieve this you destroy the city and move onto the next one. 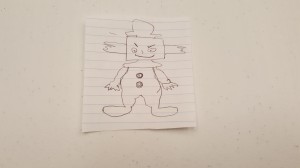 All in all the playtest went okay. I thought it could have been better. I wish I had used pixel art for this demo as well as using a cutting down on the UI. Throughout most of this playtest people were unsure of what it all meant. And because of this people were confused how the game worked. I want to design something different where the player doesn’t get confused by the UI. Also from a non linear standpoint, there wasn’t much story here. The mcguffin of the story, the coins, are also not necessarily completely understood from this playtest. I think with my next playtest I’m going to do a better job with this and put in a little more time. All in all it felt a bit rushed.