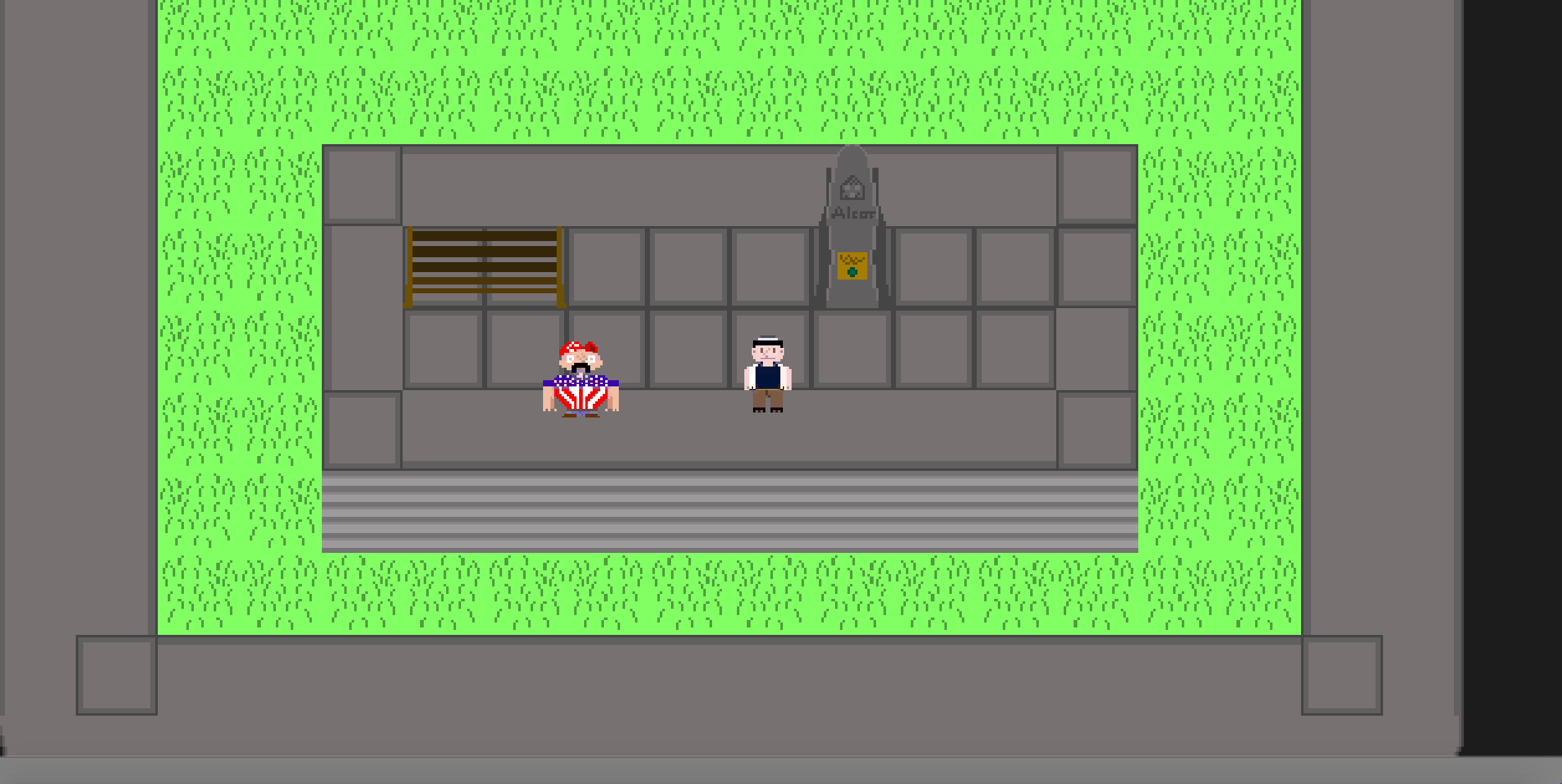 Nazi Punch:The RPG is a hands on probe into the ethical dilemma of who it is or isn’t okay to use physical violence against.  The goal of the game is to provide the player with a myriad of options as to how to approach “combat” with traditional physical violence being only one of the many choices.  The goal of the game is to be a think piece that makes people probe deeper into their moral stances to find more nuanced understandings of their own self-imposed ethical guidelines.  You play as Jacob Liebowitz, a Jewish twenty-something living in a small New Jersey town.  You go to work, you buy groceries, your days are finite. The routine gets a wrench thrown in the mix when right-wing rhetoric begins to seep into your home town.

Is it okay to punch Nazis? That question is at the core of this game. The environment and the player character are meant to ground the player in a very real world as an attempt to make the question less hypothetical and more theoretical. Every secondary element serves this backdrop.  The notion of finite days, of limited time is meant to make the player question the weight of their actions in a world that changes on a day-to-day basis.  It’s meant to make you feel as though idly standing by is the losing stance.  Beyond that level of incentivization though, the player is free to choose to spend their days however they please, whether that’s arguing with internet trolls, or it’s saving up enough money to move by working full days. Just like real life, there are no rules of engagement on the social battlefield.

The inspiration for this game came from the intense debate online about whether or not punching Richard Spencer was ethically sound as a course of action.  It was a question I myself initially grappled with.  In my own experience with the question, I found myself enriched by a deeper understanding of the ethics of violence then I had previously, and the aim of the game is to bring that to an audience.   Mechanically the game has two major wellsprings of inspiration.  One is the 2d RPG genre, games like Earthbound and Super Mario RPG, or more recently, Undertale.  The main mechanical grounding comes from these roots, and as a player, you function along these lines.  The second source of inspiration was Papers, please and it’s ability to use time and financial resources to put pressure on you as the player.  Grappling with necessity on top of the ethics gives them a grounding layer, they are no longer what if scenarios but instead they are divergent paths: do you prioritize your short-term needs, or the long term health of your cultural homestead?

Development is going fairly well, and the art resources for the game are coming along.  The main source of frustration on my part is finding a way to create turn-based combat without inserting a clunky UI.  In my prototype I was able to write out samples of what the conversations might sound like, and give the players choice within that. It demonstrated how the combat might work in the theoretical, and people seemed to respond relatively well to it.  As a way of making entire areas playable, I may create a twine file to serve as a stand-in for the combat system, and create a series of locks and keys, with the locks existing in the game proper, and the keys being at the end of the twine combat encounter.  In that way then, the game can respond to those encounters without them ever taking place within the Unity file itself, thus bypassing the UI bottleneck I know find myself at. If you had told me that the art would be the easiest part of the game to develop and enhance, I would’ve balked at you.  I have never been a particularly talented visual artist, but in working on this game I’m finding that my limitations were mostly mechanical: I have tremors that make it very difficult to draw a straight line. In Piskel these problems disappear, and I’m finding my aesthetic sensibilities to be keener than I had realized. 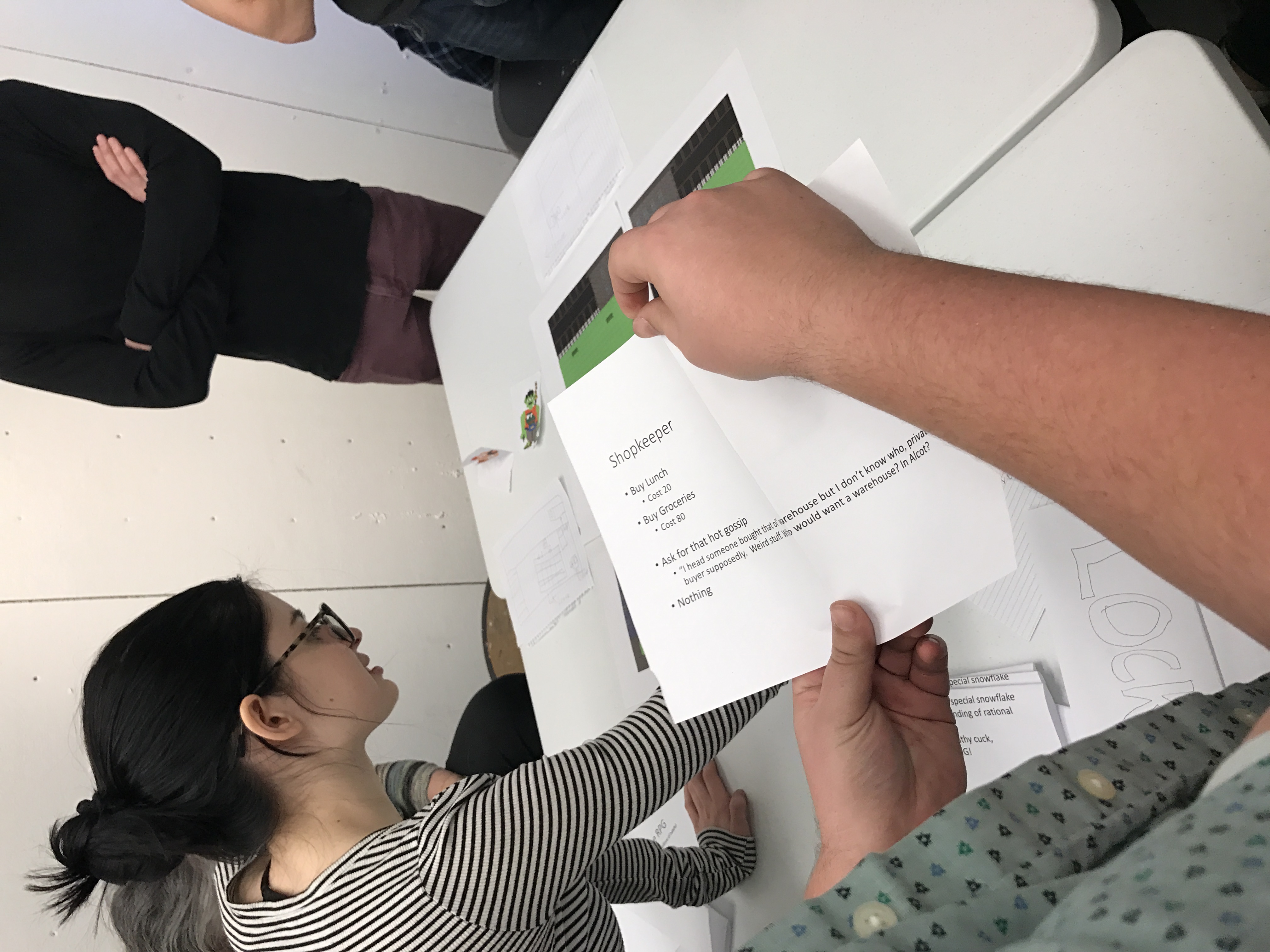 My state of the game went fairly well.  People understood the level layout for the most part, and they grasped what I was going for.  There were no serious elements of confusion where the visuals couldn’t guide people towards an understanding of utility.

The paper game more than anything taught me the importance of secondary narrative threads accessible aesthetically within the world.  Every design feature needs not only a general narrative purpose, but a specific one. In building it out to a larger game, I think I’ll have to go slower, more purposefully, about designing future areas, and redesigning the central map. 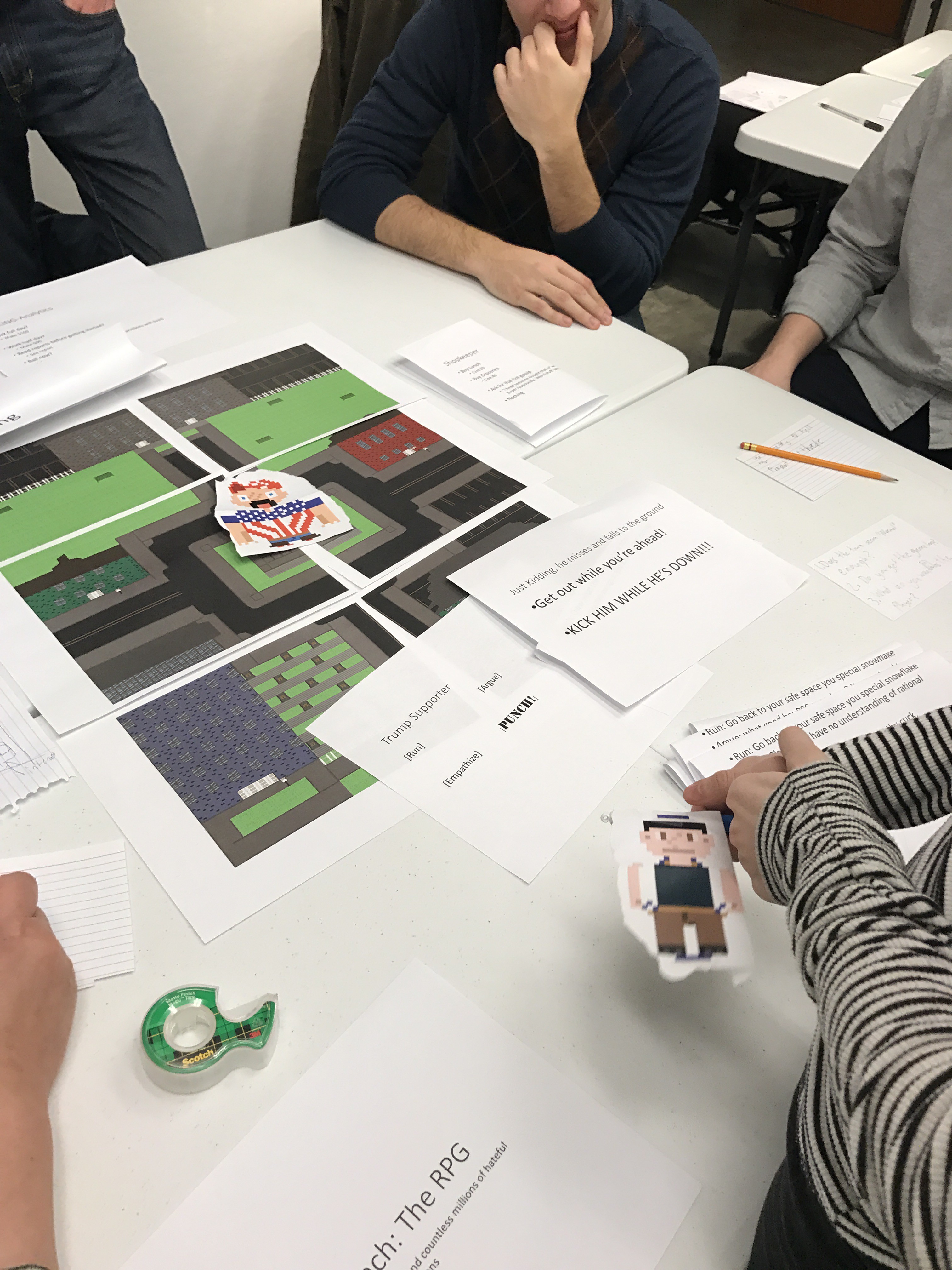 The central goal of the aesthetic in this game is to present a world that is, visually at least not at risk.  Trees aren’t dying, buildings are holding up.  The threat and the emotional stakes are provided by the conversations, and eventually the appearance of threatening characters.  The world does not visually change to meet their appearance, just like the real world.  The central escape that this game provides is that it lets the player work out the ethical quandaries set forth at the outset in a safe environment where they can really engage with them, rather than letting the fear of real-world physical or verbal violence stand in the way of a greater, more nuanced assessment of bigotry in America. 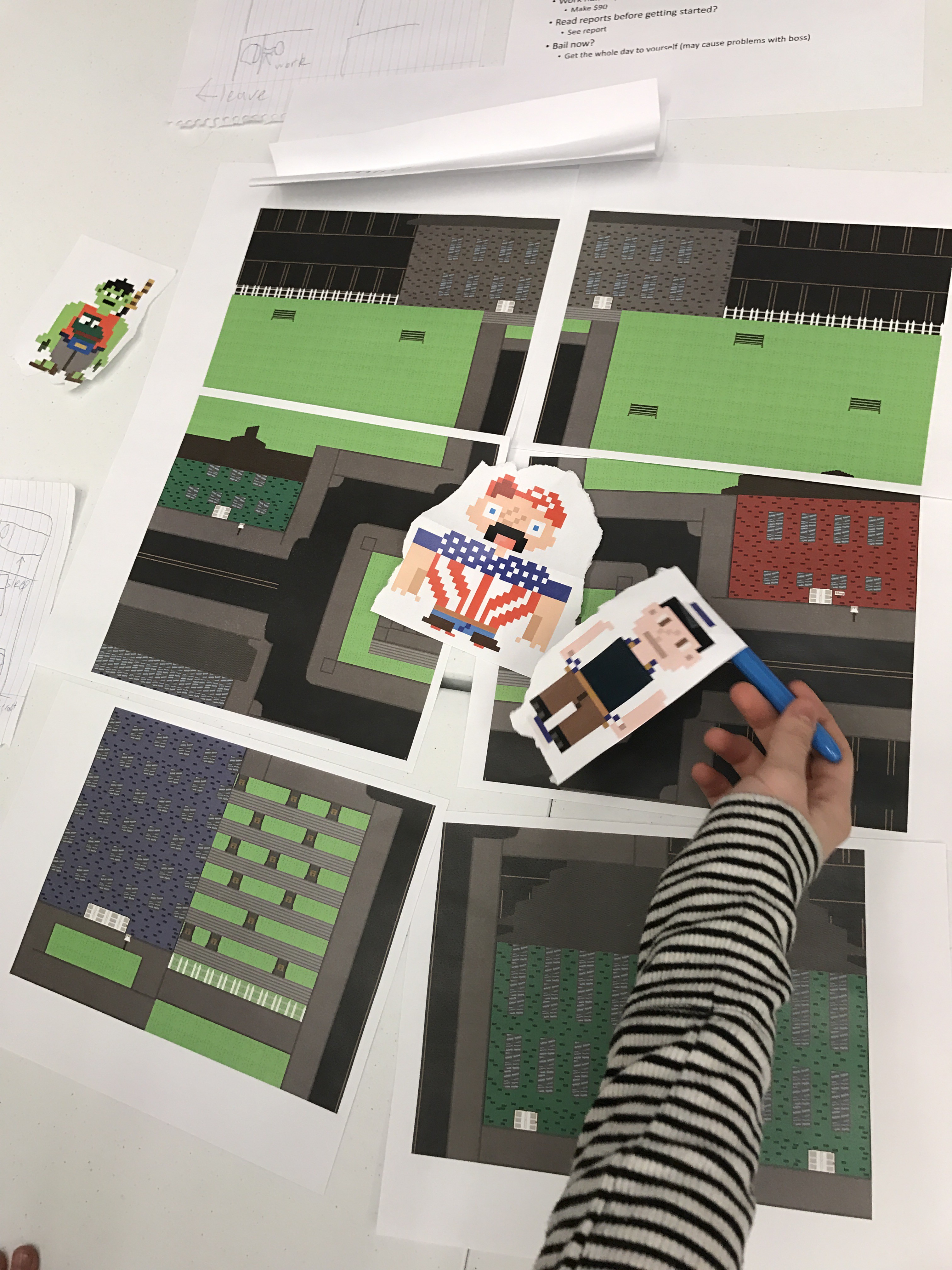 In that way then I think character design is what is most meant to convey large narrative threads in concise imagistic detail.  The trump supporter and the internet trolls both have clear visual markers as to who they are as people, what they stand for, what they believe.  They don’t need back stories because it’s all explained in their appearance.  As more enemies pop up, I hope to continue that trend.  Every encounter should happen in a way that you as the player understand your circumstances from the outset.

By the end of the semester I hope for a strong, playable vertical slice of the game that conveys the larger scope and narrative future that the game has to offer.  The meat of that work will come in the form of writing dialogue and narrative development on an aesthetic level.  The tile sets I have so far are the majority, and only a few small interior spaces are left to be created.  Overall I’m hopeful that by the time the semester comes to a close, the purpose of this game will be realized in its encapsulated form.