I wanted to work with a space I have a lot of opinions about, so for a while I was thinking Bates. I wanted to bring to light the “come and go mess hall” nature of the place by creating a space where it’s the opposite. I was planning on using a small corner of one of the back rooms and mimicing a fancy restaurant, by covering a table or two in tablecloth, setting up menus and utensils and candles, etc.

The more I thought about it though, the harder it seemed to manage. I kept thinking I’d have to get someone to play a waiter to serve people their food and talk about specials of the day and I had no idea who would agree to that.

So during conference Angela and I decided to move it to Heimbold cafe. I will choose a table, cover it in the few essential items, and instead of having someone wait on people, I would get two friends to dress up nice and eat the cafe food with a knife and fork, as if they are at a fancy dinner party. This way, it would be more of a performance.

Not only will this be easier to manage, I think it would be a lot more fun for people to witness, given the drab nature of Heimbold. Saskia Sassen talks about the “vague terrain” and the space between things. I think of spaces that are uniform or ones that follow a strict visual code. Because of that strict adherence they are silent and go unnoticed. I want to combat the cold and dry nature of Heimbold’s cafe by giving it more visibility.

the page in my sketchbook where I worked out the idea: 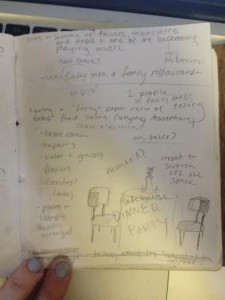 I want the table to look a bit like this – I find that making generic searches on google like “fancy restaurant” helps me figure out what items will send the strongest messages. 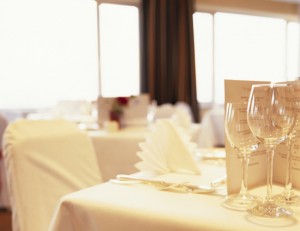