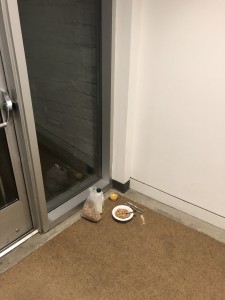 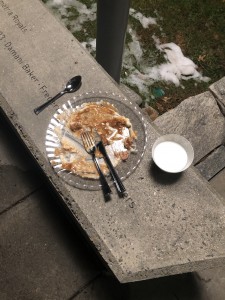 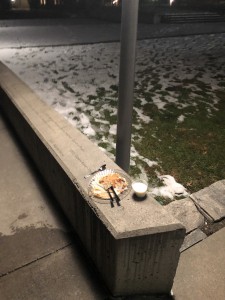 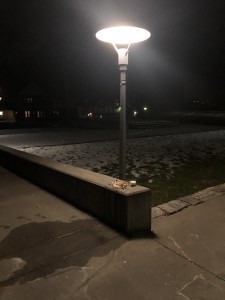 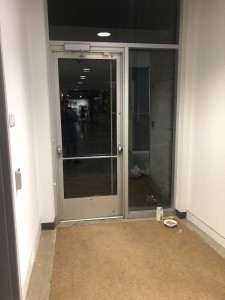 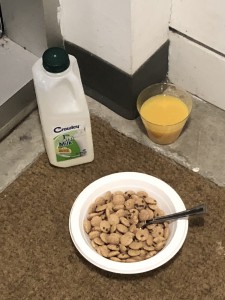 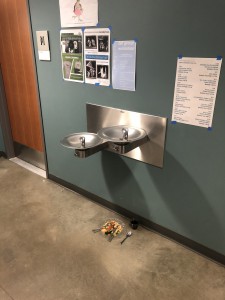 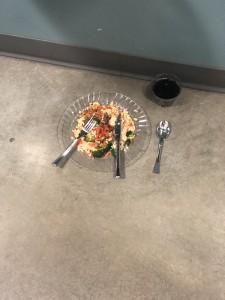 The Space HiJack Project was both frustrating and rewarding. I initially wasn’t sure what to do for my project. I presented the idea of using trash to my classmates. I received a lot of helpful feedback and suggestions, but ultimately decided to stick to a suggestion made initially, I believe, by Casper.

The idea was to have trash laying around the building in an orderly fashion, as if to suggest a story, inviting people to stop and think about what they were seeing. That sounded both exciting and challenging. We settled on making it seem like someone had a meal and left the rest behind.  I gave a lot of thought about what the meals would be. I ultimately settled on having the kind of meals I ate, using things from home. The installation was installed in three different parts of the building. Breakfast, lunch, and dinner.

On the next day, as it turns out, two of my pieces (lunch and dinner) had been removed. It was ironic — but mostly rewarding. In part, you could consider their removal a failure. After all, whoever removed it, clearly didn’t think it was art. It was trash. In other words, the meaning that I was trying to attach to these objects — which would clearly point to this being an installation — was not conveyed as clearly as it should. The objects remained just that: objects.

On the other hand, I ask myself questions: Who removed this? Were they aware that people were installing art in the building that would be seen by students the next day? Perhaps the most important question of all: What do they think of as art? If I saw this installation in a gallery, I would stop and think about its meaning, what the artist was trying to convey. My father, on the other hand, would walk by it, laugh a little, maybe say something like “I could do that!”. This isn’t a supposition either, I’ve seen him say things like that before.

Let me now speak about why the removal of my pieces has felt to me like an accomplishment. I’ll try to explain it as best I can, because I don’t have a full opinion formed yet. I believe my excitement comes from the fact that someone engaged with my art. They picked it up, then they threw it out! They touched it, they walked over to the trash, threw it in. The pieces of it are now in a dump somewhere. Perhaps they’re being recycled at this very moment.

I don’t know why, but this interaction (an interaction not person-to-person, but person – to object – to person) has made me feel like the observer of the piece rather than the person who created it. It feels, strangely, as if this wasn’t an installation, but a moving piece (performance art, maybe?) that started when the art was picked up and thrown out, and ended when I found out it was no longer there.