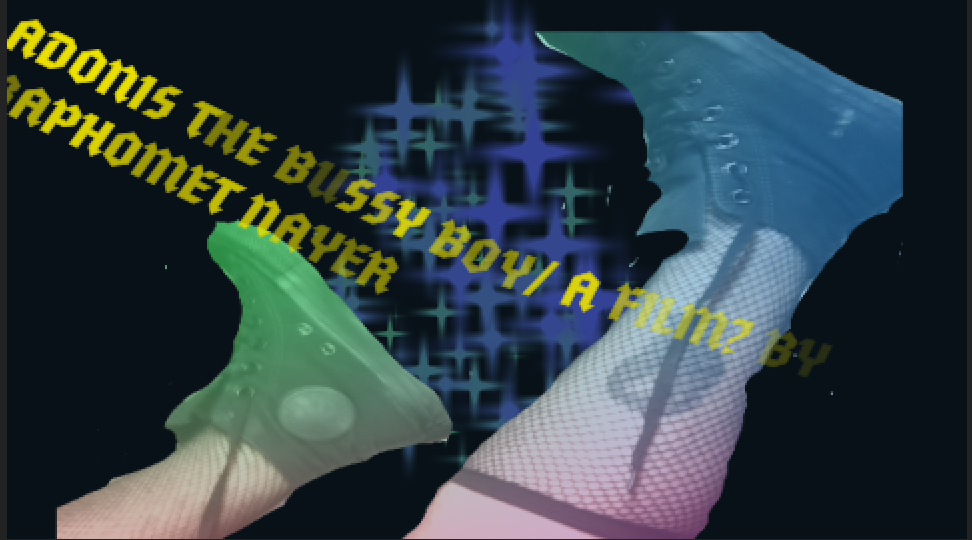 For my conference I decided to animate a poem of mine.  It goes like this:

I wish I could flay you alive my love

Let me step into your skin

Let me cast you out

I deserve the cloak of your lean muscled body

I deserve your dick and your chiseled jaw

While your consciousness lays

Broken on the floor

Sometimes in my dreams my breasts fall off

I see them rolling on the floor

And out of the holes come stars

But for now I must suckle and worship you

With the big cock I want

I cannot help but look at all of you

The Adonis that drinks too much

And goes on benders

And bends you over

And leaves you with big purple love bites

I settle with fucking you

If I can’t take your body

I will have you inside me

Your scent will mingle with mine

Will replace snatching your skin

And the sight of my own eight inch dick.

Now that this is here, let me take the poem and video apart for you.

The Title- The title makes reference to Adonis, a man so handsome that Aphrodite fell in live with him and uses the term bussy, a slang term for boy pussy.  This title proclaims that this man is both handsome and is trans.  In the trigger warning before the title I mention how the poem and video can be triggering to viewers due to sexual themes and disturbing imagery.  However I end it with a provocation.  Throughout my life I have had to prove and defend my identity, and it has become a near reflex.  The title itself is text following a path, with my legs cut out and with an animated gradient.  I am wearing fishnets and converse for the following reasons: its a look, it goes against heteronormativity, and fishnets have a long history if being associated with sex. 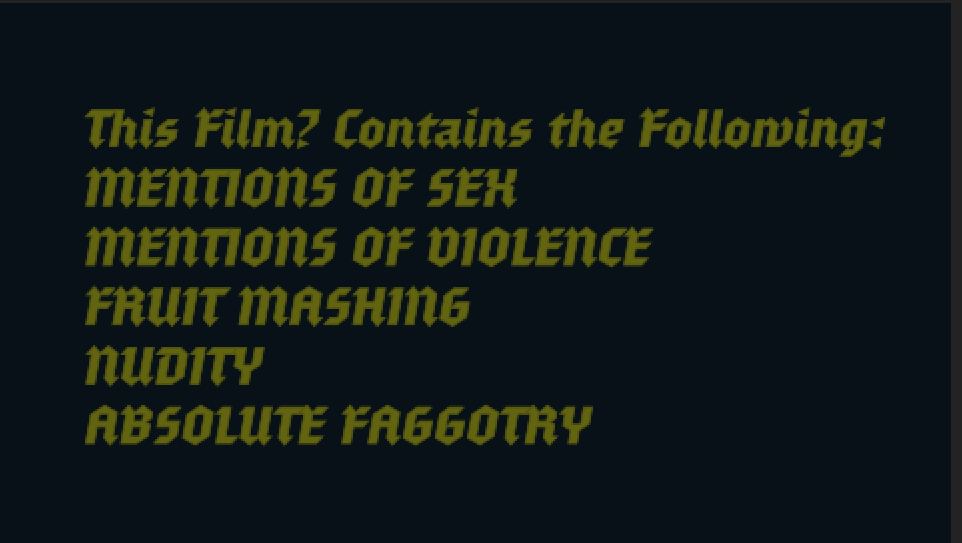 Stanza One- This stanza is about the experience of sleeping with someone for the following reasons: because you want to look like him and because you’re sexually attracted to him.  However you can’t let anyone but yourself know this because you’re still stuck in the closet.  This experience is violent.  In the video I have cut up the lines of this stanza, and have timed them so they flow across the screen a different speeds and times.  I use a fractal with color changes to keep time to the music.  In addition I have looped four rotating peaches and included a distorted video of me cutting up a kiwi.  This is a play and take on the word/ slur “fruit”.  I am a fruit cutting up a fruit and the peaches amplify that.  My goal with the kiwis was to disturb viewers so they can understand the bare minimum of my experience. 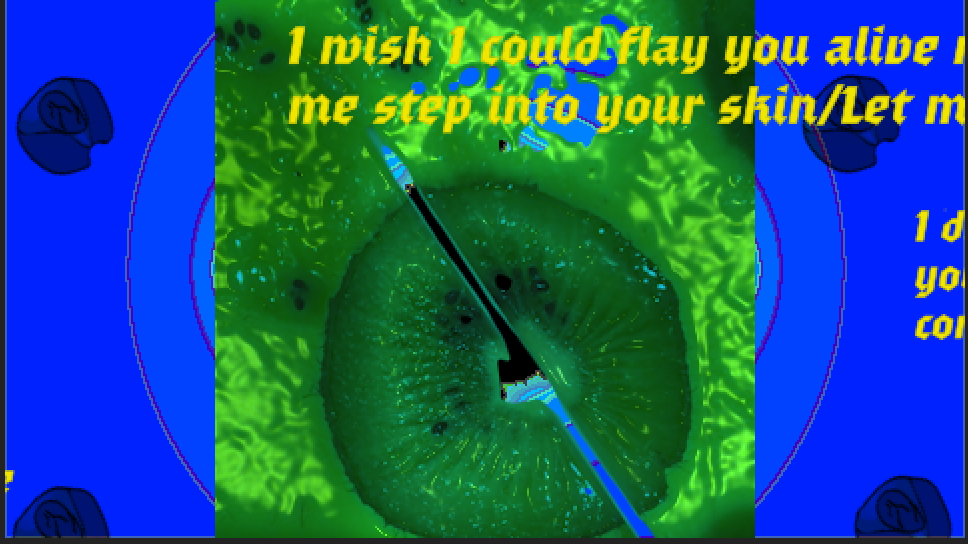 Stanza Two- This stanza is a reference to my future chest, but in the past it was just a distant dream and how to the man I was sleeping with, they were beautiful while I found them horrific.  In the video I use a noise and particle effect to create the idea of the cosmos and over this I used a series of flashing images that represent sexual intimacy (I have taken inspiration for the later episodes of Neon Genesis Evangelion).  This section to me reads as the “body” section. 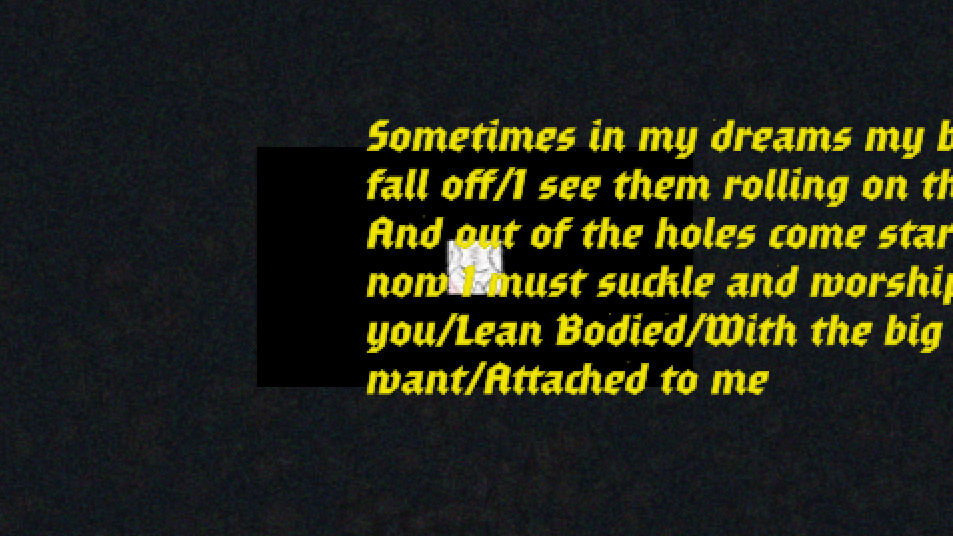 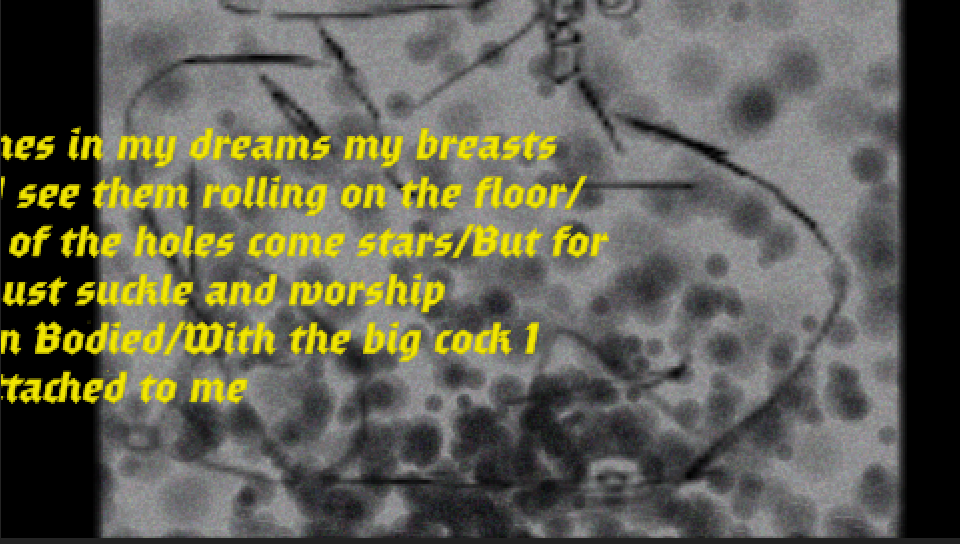 Stanza Three- In this stanza I make it explicit that I desire this man as a man would and how if he recognized that and/ or I was out as one, the experience would have been one of mutual power in addition to one of sexual gratification and validation.

Stanza Four-  The final stanza is me accepting that in this encounter, this man will never see me as a man, so instead I settle with being physically animate with him, which is what I want, while recognizing that I need to transition.

For stanzas three and four in the video I incorporate them both over a video of myself that my current boyfriend took.  In the video he asks me to draw certain things and we talk.  The video represents my present: I am an out gay and trans man with a partner that loves and respects me as I respect him.  The text however represents the past but is also a declaration of my resilience and happiness to it.  Within this section I incorporate the pink triangle and a double mars symbol, both symbols of gay identity. 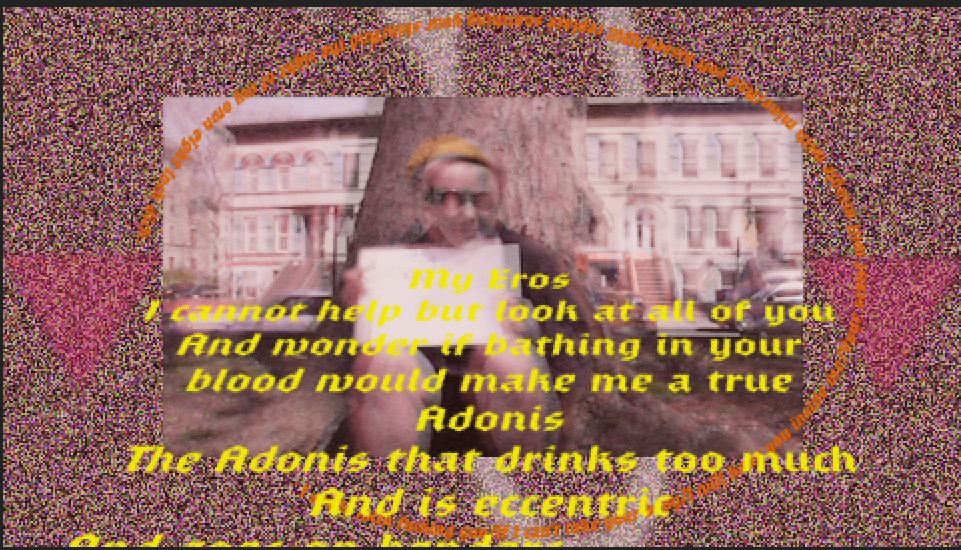 This piece feels like a baby to me.  It is a symbol of my masculinity and vulnerability.  It marks a point in my evolution as an artists and person and is a reminder for how far I’ve come.  Also if you’re the dude from this past encounter and reading this: I lusted and had sex with you as a man, and even though I was closeted, you can’t take that away from me.